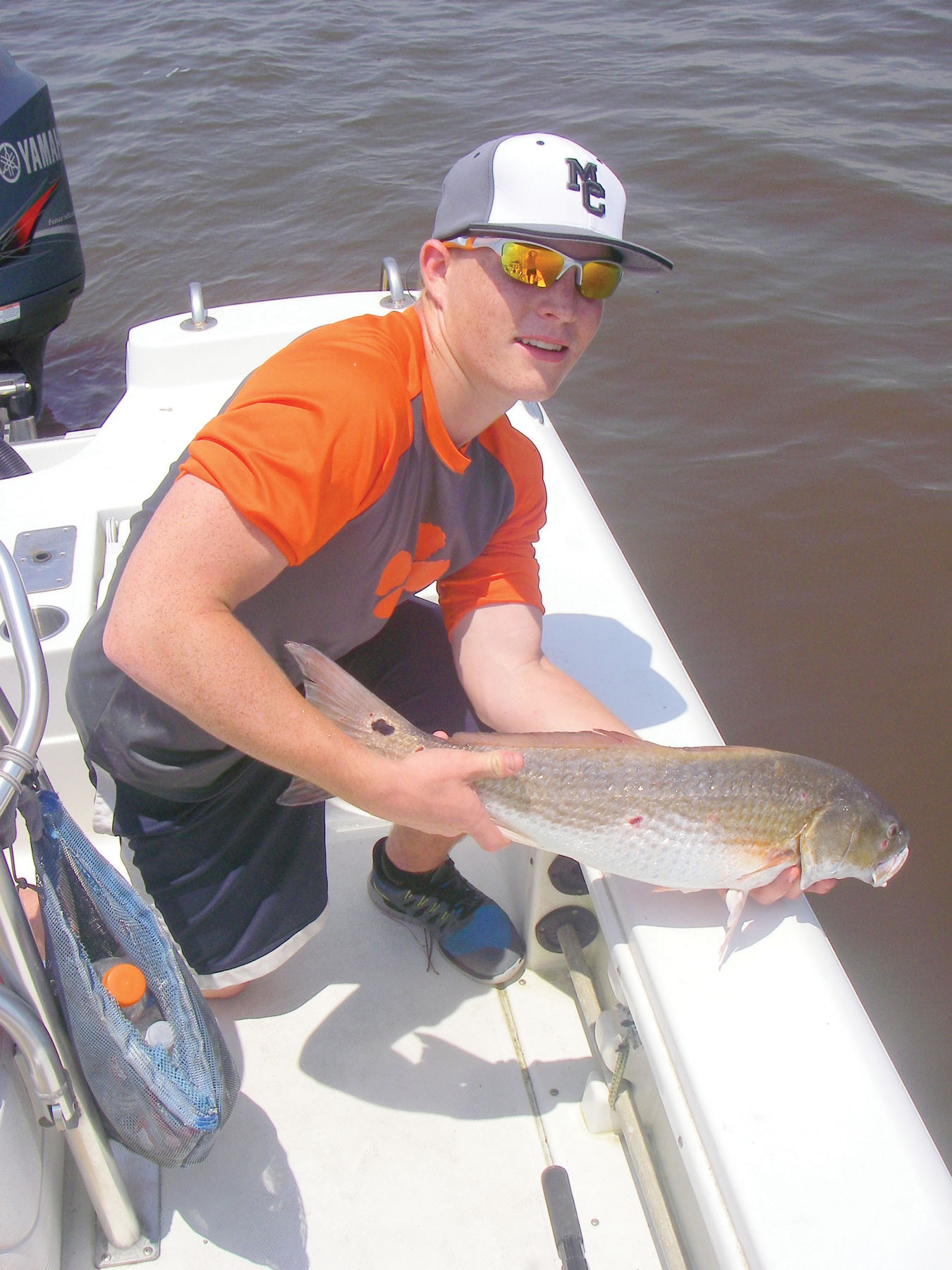 Catching was more important than keeping for Andrew!
While I both appreciate and accept the fact that three consecutive months of flooding will prove beneficial over the long haul for inland lakes and a significant portion of the coastal fishery, it has been more akin to a nightmare with no immediate end in sight for Sabine Lake anglers. As a matter of fact, it is as black as the inside of a cow outside right now, and pouring!

In even the driest of years, the infusion of less fresh water has never posed a problem for our bay fishermen. In fact, visiting anglers are quick to point out that our venue is actually saltwater-lite at best. The Sabine and Neches rivers as well as the bayous nurture healthy brackish marshes while affording a viable bite for everything from black bass to speckled trout.

Between hoping there was a bite that I may have overlooked and refusing to ask clients to fish amongst the daily crowds south of the Causeway, rather than sit home and wait it out, I spent most of the past week exploring every depth and technique that ever yielded a trout from north of I-10 to the Causeway. We chose a different section each day and while we found more flounder and redfish, we caught only three keeper trout in three days.

Because my pipeline of recreational fishermen that share a phenomenal amount of information throughout the year has given up on the lake, we were very much on our own. In fact, in spite of a spate of light winds and more sunshine than rain, we counted a total of only sixteen boats on the entire lake over a three day period and a few of those were repeat fishermen.

While I am personally frustrated and concerned with how this will all play out, depending on your affinity for fishing in a crowd, there is still a very decent trout bite to be had from the Causeway to the short rigs as well as in Keith Lake. Some of the largest trout reportedly have been taken out of the Keith Lake area, but that chain of lakes is shallow and a little added pressure keeps the fish on the move.

Depending on the strength of the tide changes and the number of boats jockeying for a little elbow room, the trout bite from the LNG plant to the end of the jetties can be well worth the hassle. Certain colors can provide an edge at times, but for the most part, everyone has figured out the most productive pattern and speed of retrieve.

Easily, the most decisive advantage is arriving at the launch well before most folks even climb out of bed. The topwater bite on the Gulf side of the rocks can just be incredibly good for both numbers and size and the best of that bite takes place in the dark. Expect to ruin a few of your favorite topwaters as the fish hold tight to the rocks and you can only bank a She Dog off the granite so many times.

As the morning wears on, crawling a plastic tail down the rocks or working a crankbait a little deeper can extend the bite. While it is all about the direction and strength of wind, the beach front and the short rigs can be excellent options as well.

The saving grace for those of us that continue to try to make the fish in the lake bite on our terms has been a sporadic, but decent flounder and redfish bite. There isn't much difference in the water clarity, but cuts exiting the marshes continue to provide a reliable bite, especially early and late. Gulp tails and live finger mullet have been the most dependable baits.

I would love to report that the learning curve for us has involved exploiting a seldom-fished depth of water or even a new lure, but it has undoubtedly been more about the speed of retrieve. The trout are hugging the bottom in that thin layer of saltwater just off the bottom and slowly crawling a jig across the shell is a necessity even in deeper water.

Our solution to exploiting that bite without going broke has been rigging our tails weedless on Assassin's new swim hook. Due to the spoon shape of the belly weighted hook, your plastic tails swim upright and skin-hooking the barb minimizes a world of hang-ups. The best attribute, however, is that it converts every Sea Shad and Die Dapper in your arsenal into a legitimate swimbait!

Every trip is a good one when you fish with the kids!