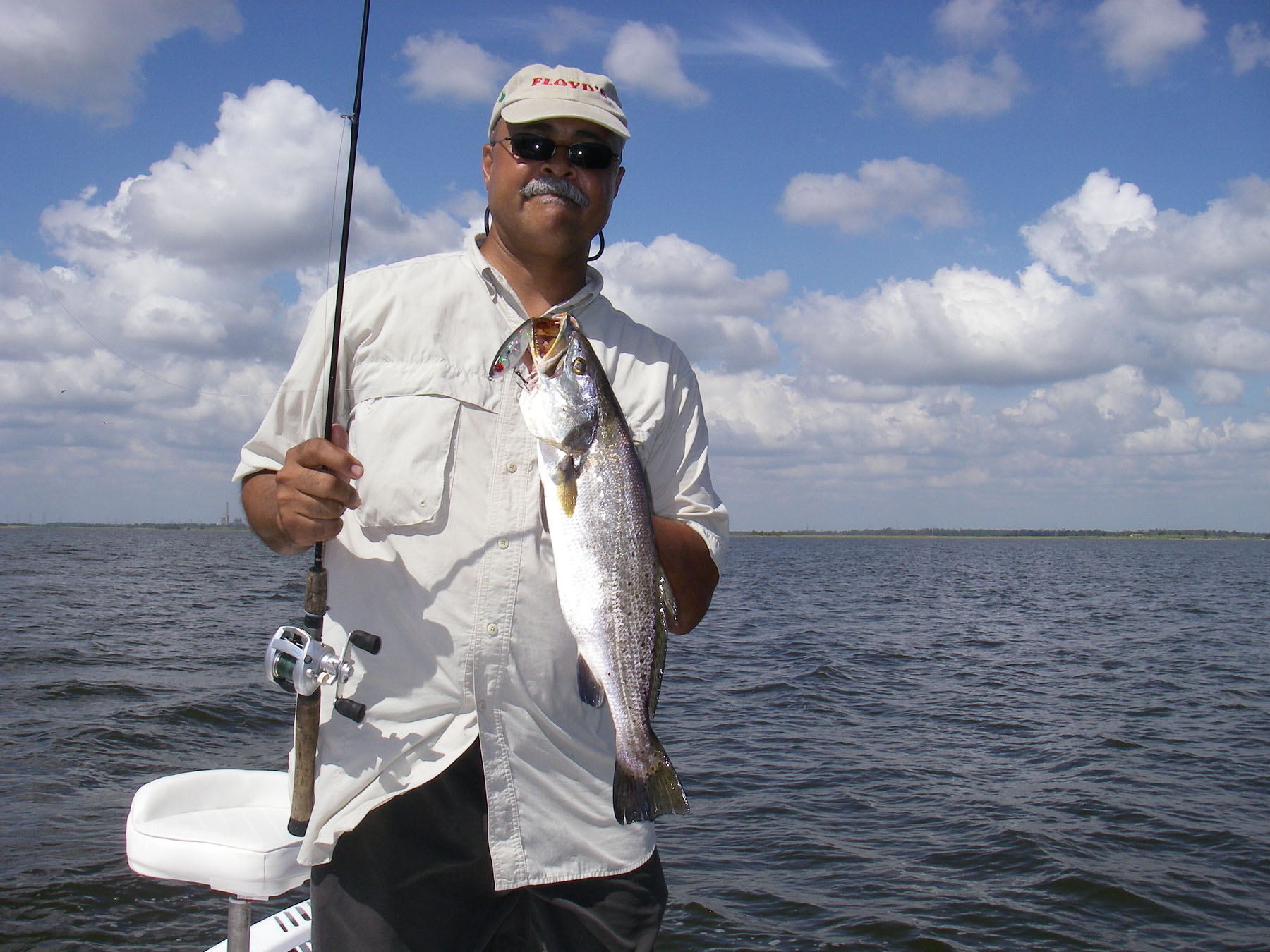 Brad Seslatte freed this nice She Dog trout.
Just before noon on October 22, a light southeast breeze gave way to a howling north wind and the bite on Sabine Lake has not slowed down since. The thirty-degree temperature drop that night was welcomed and even more importantly, it flushed the shrimp population out of the marshes and into the lake.

Two days later, the gulls made their appearance and bay rage was in full swing. Overnight, we went from seeing three or four other boats a day to feeling like we were standing in front of Chute #4 at the Fat Stock Show. There were a lot of gulls, but I think the boats still easily outnumbered the birds.

As the birds became more skittish and the hunting seasons opened, the pressure eased up and we have enjoyed some very easy fishing for darn near anything you want to catch. There are so many different programs working right now that you kind of feel like a mosquito in a nudist colony; you know what you want, but you cannot make up your mind where to start!

The better than average flounder bite has slowed down, but is not over at this point. As the water continues to cool it is difficult to anchor up and catch numbers, but we will still be catching quality flounder well into December.

We have been catching our largest trout since late September drifting flats over scattered patches of shell in 3 to 6 feet of water. These are not reefs and in most cases do not even consist of oyster shell. The more productive areas consist of scattered clamshell surrounded by mud. Because of the extremely soft bottom, they are more easily fished from a boat than by wading.

As the temperature continues to drop, we will slow our approach down with suspending lures like the Corky, Catch Five, Catch 2000, and Crazy Croaker. Should the colder weather be slow in coming, stick with She Dogs and Skitterwalks as well as Assassin eels rigged on a one eighth ounce head. Our best colors in the tails have been pumpkin, glow-chartreuse, and Texas roach.

That bite will only improve once the water temperature dips into the 50's and so will the size of the fish. Look for the bragging size trout to frequent the flats off the Intracoastal and along the Louisiana shoreline during the warmer hours of the day. Some of the more popular shell pads between Madam Johnson and Garrisons were covered with mud following Rita. While it is true that we had an off-year following Rita when we lost our grass, it is back now and we have been catching redfish and trout in those areas once again.

November and December are bonus months for anglers fishing the Sabine Lake area due to the fact that we seldom lose any days to weather. The Game Reserve is closed and we avoid the marshes out of respect for the duck hunters, but the rivers afford an excellent Plan B when the lake is blown out.

Wind or no wind, the river program is very often Plan A for me in December and it is not just a numbers game. Last year I had several clients catch the biggest trout of their life and we caught redfish until we got tired of seeing them. The secret to catching a mixed bag of big fish is to concentrate your efforts on the deeper breaks.

All but one of our largest trout last year came out of 15 to 18 feet of water and that has been the most productive depth for years. You can probably catch more trout and reds fishing mullet or shad on a Carolina rig, but I prefer to jig a Hoginar or Sea Shad off the bottom. With the artificials, we are a little more mobile and we cover a lot of water in a day's time.

We fish the river program with Power Pro exclusively as the deeper bite can be difficult to detect, especially when the water is moving. The no-stretch factor of the braid makes a tremendous difference. I prefer 30-pound test on my level winds and 20-pound test on spinning reels.

The real bonus to this program is the unexpected striper that shows up when you least expect him. More often than not, they travel in gangs and the action is sometimes brief, but unforgettable. Our average striper runs 8 to 12 pounds, but we have caught them up to thirty pounds!
I hope that this has been a wonderful and blessed year for all of you. Our prayers and heartfelt thanks go out to the young men and women serving overseas that cannot be home to share the holiday season with their families.