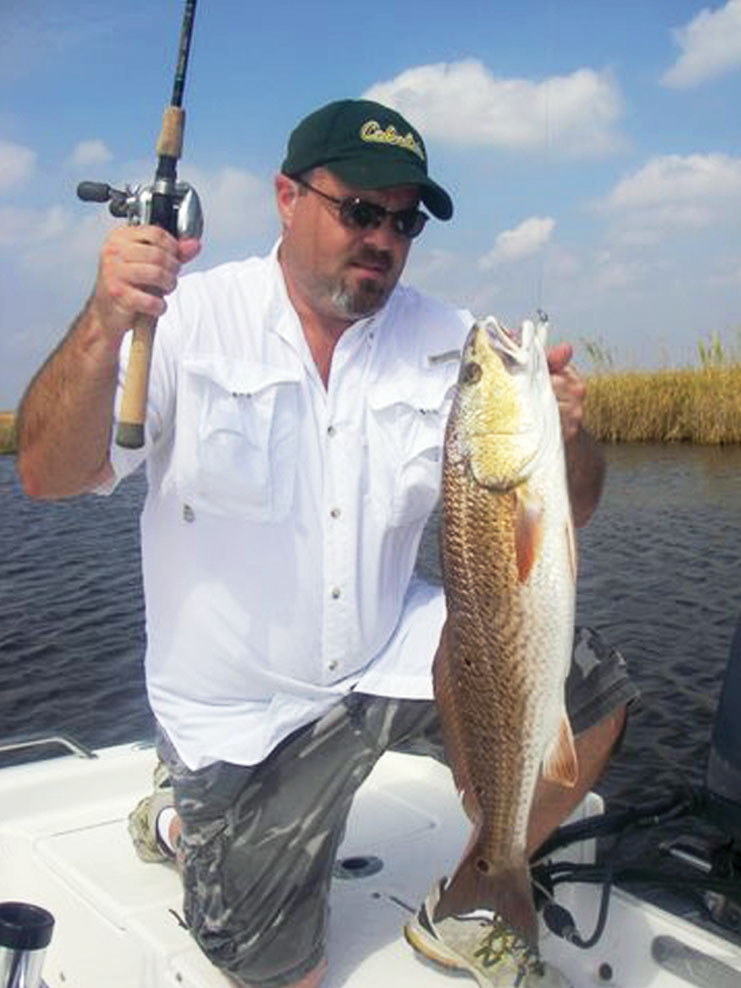 Dr. Marvin Watson released this nice red to thrill another Sabine angler.
Not surprisingly, the catching has been exceptional for the past month on Sabine and shows no signs of slowing down. Prior to the non-stop gull activity kicking into high gear, we were wearing out trout, redfish, flounder, and stripers in the bayous and the river. That action never slowed down, but the trout bite under the gulls proved too addicting for most folks.

A four-inch Assassin Sea Shad rigged on a quarter ounce head has been our number one choice for a mixed bag. When the fish are a little finicky, we switch to the Bass Assassin BLURP to take advantage of the scent factor. Our best colors have been glow-chartreuse, roach, pumpkin-chartreuse, and chicken-on-a-chain. Those same colors, along with red shad, have worked equally well when chasing the birds.

The MirrOlure She Dog or MirrOdine in bone or chrome will consistently ferret out the larger trout when hustling the gulls. When the bite is deep, the longer 5-inch Assassin rigged on a 3/8ths ounce head has a better chance of making it to the bottom where both larger trout and reds dine on the scraps as well as smaller trout!

Ike deposited some huge chunks of marsh in the open lake and they are rapidly becoming fish magnets. Much of the visible grass marking this submerged structure has rotted away, but the fish are already adapting to the new cover. Spinner baits, weedless spoons, and Texas rigged plastics are excellent choices for successfully negotiating the potential hang-ups.

I fish Power Pro line ranging from 15 to 30 pound test most of the time anyway, but braid is a must when fishing this pattern. It is pretty much a case of hand-to-hand combat when trying to extract a slot red or big sow trout from this thick cover and braid will swing the odds in your favor.

While on the subject of tackle, I still fish topwaters and suspending baits on CastAway Skeleton rods rigged with low profile casting reels, but I prefer to fish plastic tails on spinning tackle. It takes the wind factor out of the equation and U.S. Reel's 230SX SuperCaster has eliminated the dreaded line twist problem.

By the time you read this, our big trout bite will be in full swing again. The islands on the north end took a beating and the flats are a little deeper, but the larger trout are already showing up for the more patient anglers. Topwaters like the She Dog and Spook are proven winners, but suspended baits and tails are especially hard to beat as the water temperature heads south.

I will spend most of my time cranking on a Catch V or Catch 2000, but the Crazy Croaker and Corky are also deadly. Because we spend so much time drifting the flats rather than wading, we will catch a large percentage of our bragging size trout this month swimming the 5-inch Texas Shad on a 1/16-ounce head.

I f we are not bucking the wind with a drift sock; I will bury my Stake-out Stik as soon as we catch a fish. It is not at all unusual to catch several big trout from a small area if you can avoid drifting over them. Look for the slicks!