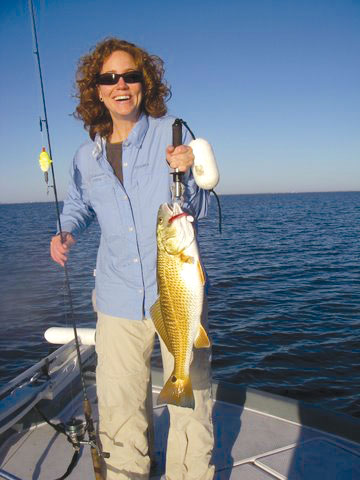 I hadn't typed the first word and the thought that immediately came to mind was the audacity of trying to predict what the fishing will be like over the course of a month when I all too frequently cancel trips due to weather the night before!

Right now it is raining sideways thanks to a twenty-five mile per hour north wind and my garbage cans have floated away once again. If that weren't enough, a friend called this morning to see if I would like to ride up to Toledo Bend and help him move his cows to high ground.

He has land on the river just below the dam and the SRA is going to start releasing more water in a hurry. Local flooding has very little impact on Sabine Lake, but excessive water running downhill in both the Neches and Sabine rivers is another story. We experience this problem about the same time of year most years so I do have a pretty good idea of what to expect.

The bad news is that it will temporarily slow down what has been an incredibly good bite all fall. The bite under the gulls has never been better and the average size of the school trout dramatically improved once the surface temperature started to drop. While we could catch a fish on darn near every cast through November, the keeper to throwback ratio was poor.

I will be very surprised if that bite slows down any this month regardless of water clarity or salinity levels. Those two factors generally slow the fishermen down more than the fish here on Sabine.

If the water clarity is good, and I don't expect it to be, there isn't a color in tails that won't catch fish. If the water is dirty, less than a foot of visibility, I consistently do better with darker colors like Morning Glory, Texas Roach and pumpkin chartreuse in longer tails like the 5-inch Assassin or Mirrolure soft mullet.

We also consistently catch our better trout swimming the tail rigged on a lighter head in the top part of the water column rather than bouncing it off the bottom. I cannot imagine the redfish bite slowing down much and they don't care how fast or slow you retrieve your lure. If it gets really cold, they may back off into the river and deeper bayous, but they are everywhere and biting right now!

I know the flounder need all the help they can get, but this has been a fantastic year on Sabine at least as far as size is concerned. I don't know about the numbers as we have not targeted them and keep only a few that occasionally crash the party. We have caught very few flatties under three pounds and that is still a very good flounder around here.

The bite under the gulls will serve as little more than a minor distraction for most of my clients as they know the window is ajar for catching the largest trout this lake has to offer starting this month. It will be slow drifts and long casts for some, but for the majority it is time to climb out of the boat and wait out the afternoon feeding spree.

We start most days with topwaters like the She Dog or quieter Top Dog, Jr. as long as the surface temperature is above the fifty degree mark. That said, I think you will still get more quality swings with a Corky Fatboy or Devil as well as the Catch V and Catch 2000. I did not throw the Mirrodine XL enough last winter, but that will not be the case this year.

It is very difficult to tie on anything that isn't pink in a suspending bait, but we have some great days with glow-chartreuse, black-chartreuse, bone and electric chicken as well. We occasionally hit it just right some mornings, but an incoming tide and the warmer afternoon hours are Plan A across the winter.

Remember... those undersized school trout are just as important as the mature sows that we have learned to photograph and release. Invest in the future by taking the time to handle every fish, regardless of size, with the same TLC!