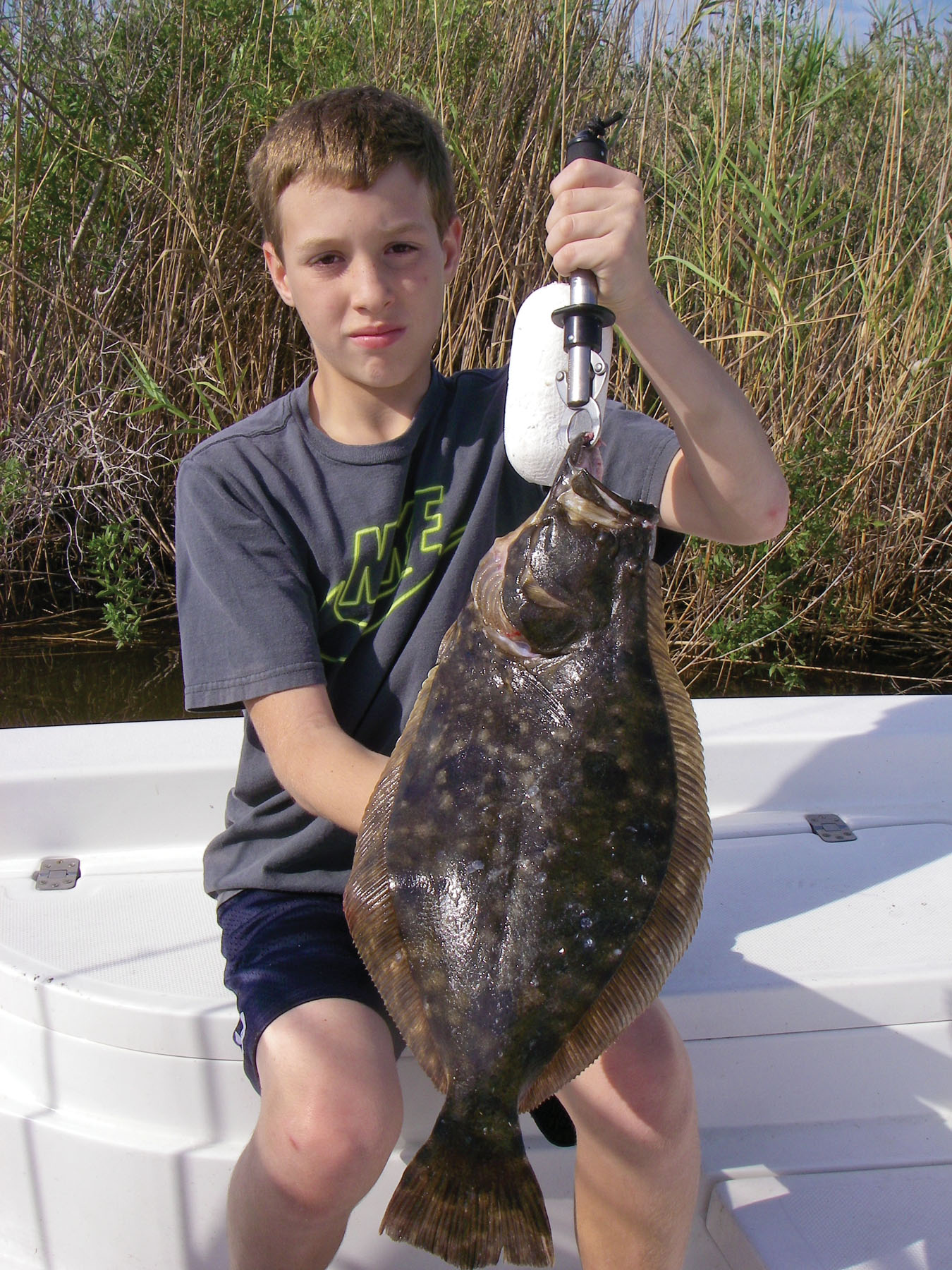 Not all of the big flounder have abandoned the bayous!

I cannot remember the bite on Sabine Lake being any more diverse or as consistently good as it is right now. This is no doubt due to the elevated salinity levels. Spanish mackerel and blue fish are being caught in the river and even a few tripletail have shown up as far north as Coffee Ground Cove! The trout bite has literally exploded with limits of two to five pound fish expected rather than hoped for most days. Slot reds are schooling in the open lake and flounder are easily averaging three pounds with five-pounders not uncommon. Add Spanish mackerel to the mix and as Capt. Chuck says, "It's just stupid good every day!"

Stripers should be showing in the river soon. We didn't do that well last year on the ghosts of the river but a few have already been caught already and the water temperature has yet to cool to the level they seem to prefer.

The bite under the gulls is still too strong for most folks to even consider mining the shallows for bragging size trout with a Corky or topwater right now. They know the big trout are due any day but the allure of a faster bite on quality fish under the gulls is difficult to ignore. The best of both worlds is to drift fish early and wade the flats in the afternoon hours.

I don't have to check my logs to tell you that at least ninety percent of the trout over seven pounds that we have caught over the years on Sabine in December and January were taken during the last two hours of daylight. Suspending lures like the Corky, Catch V, Catch 2000 and MirrOdine XL as well as topwaters that include She Dogs, Skitter Walks, and Spooks have accounted for most of those fish.

An incoming tide is to kill for at the end of the day and the presence of mullet on the surface is the primary reason for slipping over the side of the boat. Earlier in the afternoon, whether drifting or wading the flats, we usually do much better swimming 5-inch tails on a 1/8 ounce head. We generally fish a lot of straight tail plastics like the Assassin Shads, TTF's Trout Killers and Tidal Surge's split tail mullet, but as the surface temperature drops we do much better swimming longer paddle tail plastics like the Die Dapper or Flats Minnow XL. The Die Dapper is a productive alternative for folks that hate fishing suspending baits as they have a big silhouette, sink slowly and put off a lot of vibration on the retrieve.

While it is generally a much slower bite, an increasing number of anglers last year discovered the potential of the deep water bite in the ICW and both rivers. It is not for everyone, especially folks that don't have a lot of time to scout around, but it is a viable Plan B that can attain Plan A status very quickly. This approach is not a numbers game, but my largest trout each year for the last three years has been a product of vertical jigging on the river.

I usually start as shallow as 12 to 15 feet with a tail or Hoginar, but more often than not find the better concentrations of big trout and reds as deep as 25 feet. I prefer to vertically jig these fish, but there were several trout in the nine-pound class taken last year by anglers Carolina rigging baits like the Corky Devil or Maniac Mullet. I change the hooks on just about everything I fish anyway, but I can promise you that your hook up ratio with the Maniac Mullet will be much better if you'll go with a larger hook!

While it would be icing on the cake to find another Laguna Wader II rod or a Frogg Togg Toad Skinz rain suit under my Christmas tree, good health and the opportunity to fish with old and new clients on a daily basis is already like Christmas year round for me. If you are still at a loss as to what to give a friend or relative, don't overlook the fact that a written invitation to go fishing tucked inside a Christmas card is a very special gift.