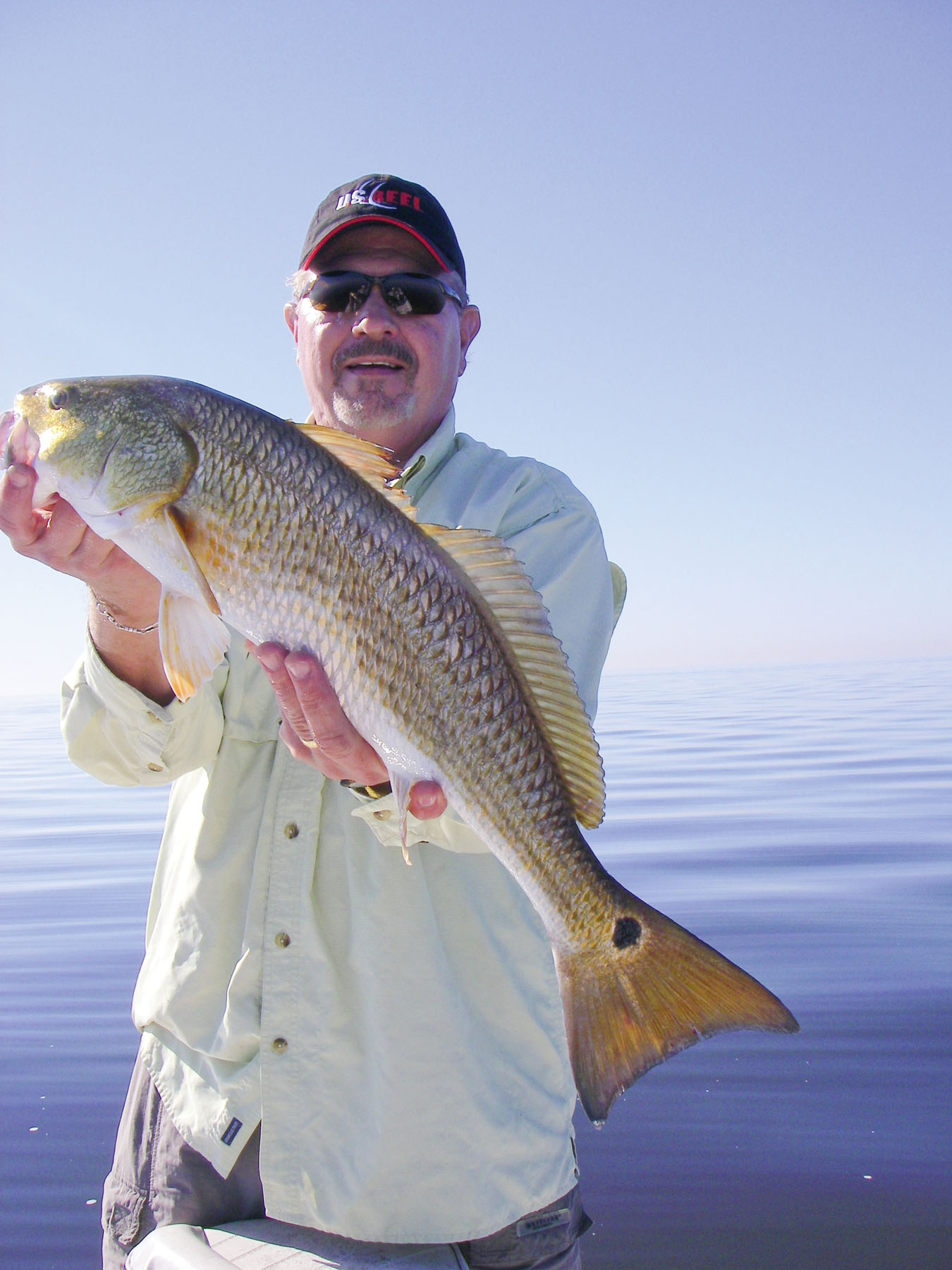 Good things happen when the wind lies down!
In my office lies a pile of fishing logs that I still refer to, but they have been of very little value this entire year. Over the years I have short-circuited “catching slumps” by referencing those logs for similar conditions and how the fish responded. Nothing about 2013, however, has been text book on Sabine Lake.

We have enjoyed a little cooler weather recently but temperature isn’t usually the fuse that ignites our fall fishing. It doesn’t explode until a few days of blistering north wind have whistled through the marshes on the east side and sucked them down to mud. As of this writing the water is still up in the Roseau cane and the anticipated user-friendly bite has been sketchy at best!

This is not to say that the catching has not been a little easier due to the assistance of the gulls, but even that bite has not been dependable. If you can locate a school or two of 15-20” trout you are fortunate - sand trout, small specks and gafftop have provided most of the action. We occasionally run into slot reds but not like we will once they are flushed out of the marshes.

Even with the aid of past logs I am reluctant to predict across the next two months, but my best advice is to plan on working for your fish rather than relying on the gulls. If a blue norther purges the marshes and significantly lowers the surface temperature I will go back to checking out the gulls and fishing deep breaks in the river, but we might not see that happen for a while.

Over the past few weeks I have caught fewer but much better trout, drifting or wading the shallow flats with longer tails and mullet imitation lures – Corky, Maniac Mullet and Catch V. Pearl-chartreuse and Day Glow have been most productive; pink is deadlier in off-colored water.

I think I understand why longer tails work better this time of the year than the four inch Sea Shad or Flats Minnow, but I have no idea why on any given day a straight-tail works better than a paddle-tail or vice versa. Choice of color is easier to understand, but I always try both styles before giving up on an area that has been good to me.

Recently, I have done much better swimming an Assassin Die Dapper, (paddle-tail), rigged on a 1/8 ounce head. The lighter head fished with either style of tail keeps the lure in the strike zone longer due to the slower fall. The larger trout are already transitioning to a mullet diet and for us that equates to spending more time in very shallow water.

Thus far, the bite on the flats adjacent the ICW has not been as consistent as the flats on the Louisiana shoreline. That water takes more effort to effectively wade, but what’s a little knee deep mud when surrounded by big trout? Small drains and points are areas we will homestead right on into the winter months.

We are also relying more and more on swimbaits as they will attract not only trout and reds but flounder as well. It is extremely easy to fish at any depth and requires little more than chunking and reeling. Color doesn’t seem as important as size. There are days when they’ll hit a 4-inch Usual Suspect better than a 3-inch.

The biggest mistake you can make on Sabine this month, outside of not fishing, is thinking it’s too early for suspending baits - Corky and Maniac Mullet. If you just can’t develop confidence in either, give the Catch V and MirrOdine XL a shot. Fishing a topwater is another viable option; I don’t know that there is a wrong time of the year to tie one on.

A lot of dedicated locals still bitch and moan about the two flounder limit in November, but they are tickled with the improved average size. We have struggled a little with the trout and reds, but we are consistently catching four to five pound flounder. Whether in the lake or the river, Gulp and three-inch swimbaits have been effective.

Hopefully the more predictable and easier fishing will kickoff before you even read this, but if it doesn’t I will not be overly disappointed. I much prefer the satisfaction gained from putting together a solid pattern over competing for the nearest flock of gulls, but either way I consider it a blessing just to be on the water.