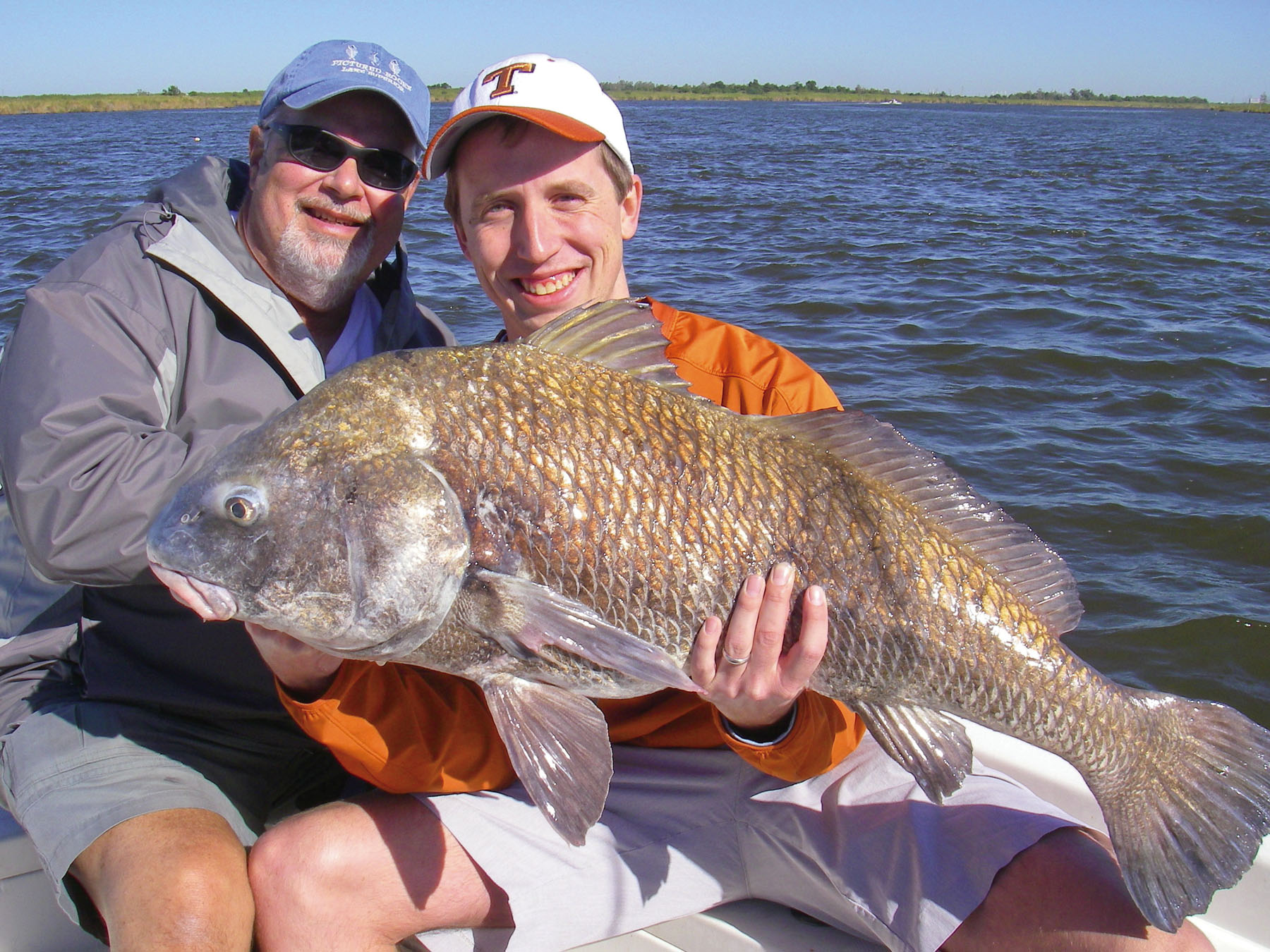 Bob and Guy's trout catching got interrupted by this party crasher!
Had I written my column only yesterday I would have probably noted the absence of cold weather and high water being the only things Sabine Lake anglers have to complain about. That changed last night as a stiff north wind ushered in 40⁰ and finally pushed some water out of surrounding marshes.

Aside from stalking our largest trout during the coldest months, there is no time of the year I enjoy more than mid-October through most of December. I look forward to putting on Frogg Toggs to break the chill of that first boat ride of the day. The fact that they take up no more space than a sack lunch makes them a must item on my boat.

We basically have it all going on right now. The flounder bite is good enough that most folks are griping about the two fish limit while landing the improved size at the same time. We are covered up with incredible numbers of small specks and sand trout and the bird bite is a daily thing, both early and late.

Couple all of that with the fact that larger trout are starting to show on the flats bordering the ICW and there is little left to do other than pick a program. Depending on your fervor for catching redfish, that much anticipated bite is also good and will only get better as the northers pump water out of the back lakes.

By the time you read this, the "big" trout bite will be even more consistent. We turned our back on the easier programs one day last week and waded a shallow flat just to see if we were missing anything. In a three hour period from four until dark, three of us caught and released 17 trout from four to seven pounds. All came out of two to three feet of water and every fish ate a day-glow Corky Fat Boy or a pink Catch 2000.

Too much wind on any given day can alter the best of plans but I think the only mistake you can make on Sabine this month is trying to do it all and doing none of it very well. Even a plan that involves splitting time between chasing gulls early and fishing another pattern once they slow down may rob you of enjoying the most productive hours of your second choice.

If you want non-stop action, then by all means fish the gulls. It doesn't mean you won't catch a big trout, but a three to five pounder is a coveted fish in that program. The bonus to this "run and gun" fishing is stumbling upon marauding redfish. The most user-friendly set-up for this bite is the cork with a two foot leader and a Vudu shrimp, four inch Assassin Sea Shad or MirrOlure Lil' John.

Invariably, we catch the larger trout in these schools working a four inch Usual Suspect swimbait or Crazy Croaker beneath all the surface activity. Pink-pearl in the Crazy Croaker and cock of the walk and space guppy are hard to beat in the swimbait.

Whether drifting or wading the shallow flats, Fat Boys, Catch 2000s and Catch 5s are hard to beat. The new Soft Dine XL, as well as the Maniac Mullet, can be equally productive. We will also spend time swimming the Die Dapper rigged on a 1/8 heads. Clients that just cannot buy into the mullet imitations do nearly as well with the Die Dapper.

When the wind rakes the open lake we will fall back to the protection of the river and bayous and never miss a beat. If I am not "scraping the wall" of the deeper breaks I am usually crawling a three inch Usual Suspect or Gulp Swimming Mullet across the narrow flats bordering the deeper water. We also have our days with a 3- to 5 foot diving crankbait in Sexy Shad or Fire Tiger or the same Swimming Mullet rigged on a quarter ounce spinnerbait.

I personally catch very few trout with the spinnerbait but it can be deadly on both redfish and flounder. Because we can only keep two flounder we seldom target them, but we are still catching quite a few in the 4- to 5 pound class and the spinnerbait enables you to cover a lot of prime water with each cast.