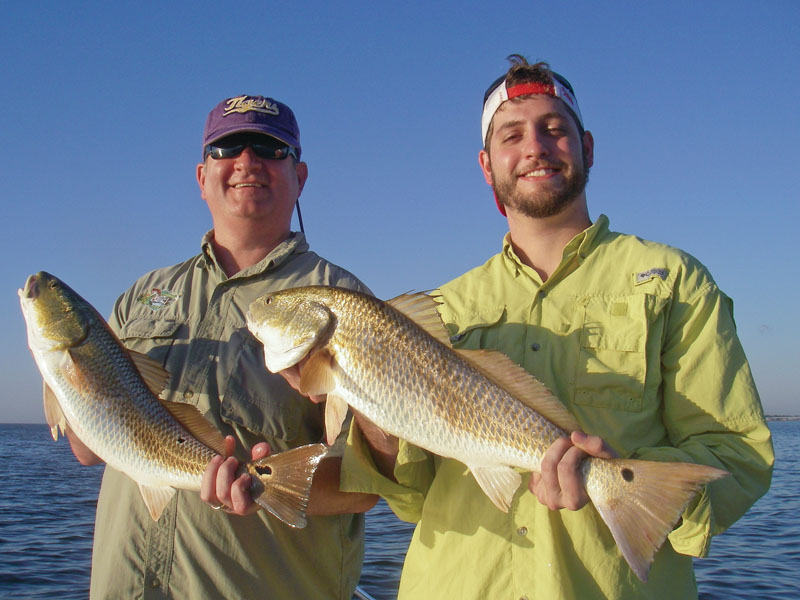 A good way to start any morning!

All it took to ignite the bite on Sabine was a storm surge that stripped the decking off piers on the south end of the lake immediately followed by a nine inch rain event and a 30 to 40 mile per hour wind. Not exactly what you expect in late October but right in line with the weather conditions we have dealt with all year long!

The saving grace, in spite of Mother Nature's ugly ways, was that the incredibly high tides the week prior to the storm pushed saltwater well up both the Sabine and Neches rivers. The local flooding that followed this had far less effect on the salinity and it was "game on" as soon as the wind subsided.

The shrimp had already started exiting the marshes, even on incoming tides, and that migration gets stronger with the passage of each cold front. The water clarity is excellent all over the lake and while I fully expect a blizzard of Biblical proportions to unexpectedly roar through tomorrow, the catching is currently about as good as it can get on Sabine!

Wind and cold are to be expected across the next few months, but hopefully we will experience far fewer major rain events in 2016. The only anticipated element missing in a very user-friendly bite has been trout in the six to eight pound class, but even that should change as we spend more time wading than drifting.

We are already spending more time out of the boat and are catching more trout in the five-pound class than we are drifting the flats or working the birds. Admittedly, it is hard to keep clients focused on fewer bites and larger trout while watching trout and reds blowing bait out of the water under the gulls in deeper water.

Make no mistake about it–it is nice to once again have multiple options. The trout we are currently catching under the gulls are much larger than they were even a month ago with limits of 2- to 3-pound fish pretty much the norm. You can get it done in a hurry with plastics like the Usual Suspect, Lil' John or four-inch Sea Shad rigged on an Assassin Swim Hook, but the largest fish in the schools are more apt to eat a topwater like the She Dog or Super Spook.

At least one person in my boat is always fishing a tail under a TKO popping cork even when the birds aren't around. That rig, fished with a Laguna 7 foot medium action spinning rod and Shimano reel filled with 20 pound braid keeps even a first-time fisherman very much in the hunt. Backlashes are not a concern, the drag systems are more than adequate and the lure stays in or just above the strike zone at all times.

It has been so nice not having to beat the shoreline while casting into the teeth of the wind eight hours a day, but that bite hasn't slowed down. In fact, it remains a very productive Plan B with both flounder and redfish ambushing finger mullet and shrimp on every small point of grass. The redfish will just crush a topwater but you will generate far more bites with a three-inch Usual Suspect or a GULP Swimming Mullet.

If we learned nothing else from having to deal with crippling salinity levels that eliminated ninety percent of the lake, it was the importance of speed of retrieve when fishing plastics. When the salinity was at its lowest we were forced to literally crawl a tail across the bottom and, more often than not, simply shake it in place.

On the other end of the spectrum, we were a little slow to pick up the pace as the salinity improved and a better bite may have taken place even sooner than we initially thought. With that in mind, I have since fished my tails a little quicker thus keeping them in the upper part of the water column more than ever before and caught trout when a slower retrieve failed miserably. There simply is no "one size fits all" when it comes to fishing, but experimenting with confidence is more valuable than any lure in your arsenal.

An invitation to fish with you is a Christmas present no youngster will ever forget. Merry Christmas and Happy New year!