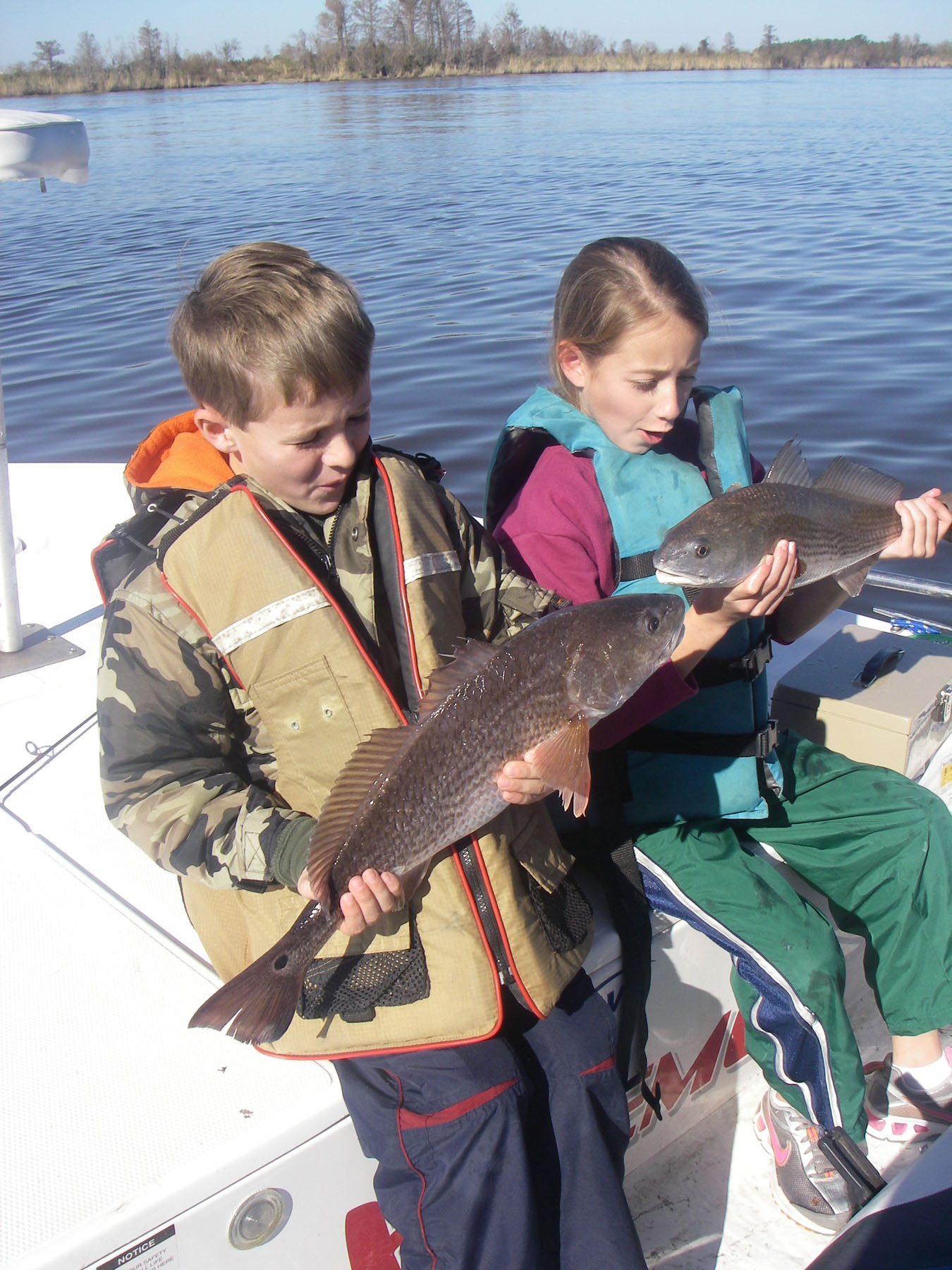 Will and Grace Ann Brown were proud of their first redfish.
If the water in Sabine Lake and the surrounding marshes appeared to have a reddish tint over the past couple of months, there was an explanation for the phenomenon. We have been absolutely covered up with redfish!

Not one to doubt the predictions of the biologists, I remained a little concerned in the early fall when we continued to catch huge numbers of fourteen to seventeen-inch redfish. As 2006 drew to a close, I was assured that we would be covered up with slot reds the following year due to their projected annual growth rate and an abundance of forage fish.

It appeared that we had turned the corner in late August, but September and October saw a repeat of the invasion of the smaller fish. Then, just as predicted, the first cold front blew open the gate on the holding pen in early November and it has been nothing short of incredible ever since.

There have been few days if any, even in deteriorating weather conditions, when a limit of slot reds has not been all but a guarantee.

An outgoing tide ensures the catching will be even easier for anglers fishing the river and bayous, but that added advantage is considered a bonus rather than a necessity.

Outside of a weekly court bouillon or a little redfish on the half shell, the best part of the incredibly easy bite has been the opportunity to share it with youngsters. There is very little waiting involved between strikes and there is a lot of kid in all of us when line starts peeling off the reel!

I admittedly encouraged more clients to bring along the kids when I was not fishing with my own eight-year old grandson and his pals this past year and it has been a renewing experience watching them not only catch their first fish, but improve their skills as well. They are dependent upon a mentor providing the opportunity for them to get out on the water and I urge you to make that happen on a more frequent basis this year!

I believe the gulls worked better the past two months than they did in the fall. We caught a lot of quality trout and redfish under them on days better suited for duck hunting. At this point, I would not bet my favorite CastAway rod that they are not still working in February.

We enjoyed a brief run on big trout last month that has us all excited about the potential for the upcoming months. We had them zeroed in when the surface temperature dipped into the low fifties and stayed there a few days, but it warmed up and they became harder to pattern.

I caught and released maybe the largest trout I have ever taken off Sabine during that period, a 32-inch fish that bottomed out the ten-pound mark on a Boga, and several clients caught personal bests in excess of eight pounds. I expect the same kind of action to be more consistent this month.

Look for the larger trout to hold over any kind of change in the bottom and it does not have to be shell or grass. The most productive water for me, whether it is on the Louisiana shoreline or south of the spoil islands on the north end, has been the transition from packed sand to mud. Small patches of shell can get red hot as well, but we tend to over-fish those isolated magnets.

Because most of that type of bottom is in water 3 to 5 feet deep, we will catch many of our larger trout drifting, rather than wading, this month. Once we have located a few good fish on one of these flats, we do not just drift and continue to cast. As soon as we get the first strike, I stop the drift with my Stakeout Stick and make repeated casts, as it is not unusual to catch more than one big trout in a small area.

If it is shallow enough and the fish were holding on shell that we did not know about, I will mark it and we will wade it the following trip.

Remember, while the presence of mullet can be a make or break factor, water clarity is not a big issue on Sabine. Even our clearest water does not get very high marks from anglers that fish the lower coast!

While lures like Rapala's new SubWalk are getting more playing time each trip , Catch V's, 2000's, Corkies, and Crazy Croakers are already proven winners on Sabine this time of the year. Easily our top colors are bone or chartreuse combinations as well as the reliable electric chicken. Black-chartreuse or morning glory will sometimes salvage a long day when the water is exceptionally off-colored.

I also catch a number of good fish this time of the year on the five inch Assassin Texas Shad in pumpkin, glow-chartreuse, or morning glory.

I usually swim it on a 1/16 ounce head or Texas rig it weightless with a 3/0 Mustad wide gap worm hook. I have also had clients stay in the hunt by dragging the Assassin on a Carolina rig on windy days.

Both Rayburn and Toledo Bend are in a position to build levels right now, so fresh water runoff should not be a major problem. You have to love it to fish in the winter, but the shot at an encounter with a big speck on Sabine this month is worth weathering the discomfort of a little cold wind and drizzling rain!