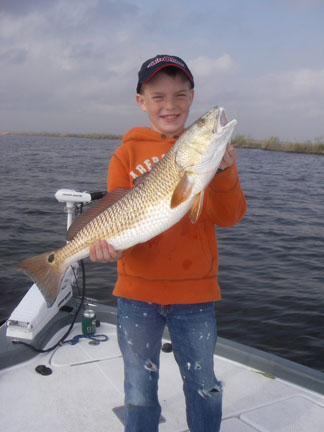 This red was released in hope of a later rematch.
We have enjoyed a predictably great run on big trout on Sabine over the past two months. We lost much of the spring to the wind, only to be saddled with outrageous gas prices, a devastating hurricane, and a sagging economy that resulted in decreased fishing pressure. The big winners were the trout and redfish that had the lake to themselves.

The gulls worked over huge schools of redfish and solid trout through the first week of January, but the handful of anglers willing to battle the elements are now focusing on the bragging size trout frequenting the shallow flats. If we can avoid excessive rainfall and runoff from the rivers, this month could be one for the books.

Do not be discouraged by the lack of water clarity. There is still a lot of sediment in the water thanks to Ike, but it hasn't hurt the fishing at all. If you can see a lure 6 to 10-inches deep on a flat that is 2 to 4-feet deep, you are in business. The keys to consistently cashing in on this phenomenal bite are locating baitfish or small slicks and staying put.

If you choose to drift-fish, keep your Stakeout Stick handy so that you can stop your boat the instant you get a strike. Too many folks continue to drift right through the fish or spook them with the troll motor. Not unlike the wade fisherman that often catches multiple fish while standing in one spot, you can do the same thing by quietly holding your position.

Long casts create a lot of slack line, but are a must when drift fishing. Because the slack and stretch factor can rob you of a solid hook set, I minimize the problem with 20-lb. Power Pro and a 4 to 6-ft. leader of 20-lb. Seaguar fluorocarbon. I prefer a little shorter rod when fishing out of the boat and CastAway's Skeleton series includes a TSR65ML that works well with everything from tails to topwaters.

You can limit on slot reds before your hands thaw out most days cranking a Red Daddy spinnerbait or a weedless gold Johnson spoon across the shallow mud flats, but neither of those choices dupe many big trout for us. You will not catch as many reds when targeting sow trout, but they will eat anything a trout will eat!

Depending on water temperature, a critical variable too often overlooked, we are scoring with larger topwaters like the Top Dog and Spook or a suspending lure like the Catch V, Catch 2000, MirrOdine XL or Corky. When the surface temperature dips below the 50 degree mark, I replace the topwater with a 5" Assassin Shad rigged on a 1/8th ounce head. Because it can be readily fished from top to bottom depending only on speed of retrieve, the Assassin is my first choice for locating both trout and reds. I will quickly switch to one of the mullet imitations, however, if it fails to attract the larger trout.

You are in the game with any of those lures through early spring. Water clarity will dictate our choice of colors. I have had a growing number of inexperienced winter fishermen hold their own this year fishing a 5-inch Assassin Shad on an 18-inch leader under a Click Cork. Even when they are more concerned with staying warm, their lure remains in the strike zone!

We tend to catch most of our better fish in the evening hours, but that is not cast in stone. If you start your day early, concentrate your efforts in 4 to 6 feet of water adjacent to the shallow flats. The fish will stage on the slightly deeper breaks while waiting for the shallower water to warm.