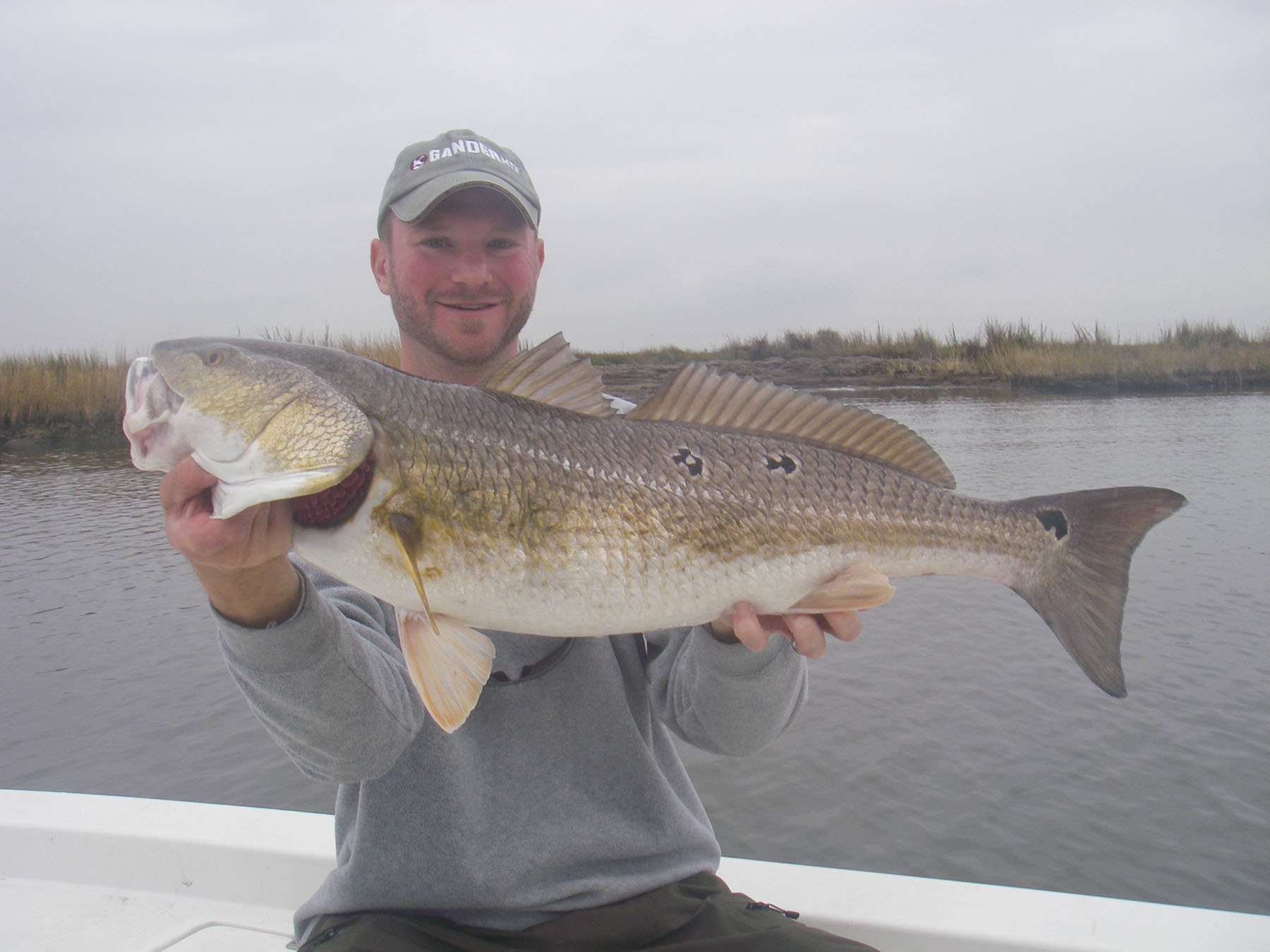 Another big redfish caught and released.
We haven't eaten it raw yet but I am starting to feel like Forrest Gump and Bubba when it comes to cooking redfish. We have eaten them fried, broiled, baked, grilled on the half shell, added to seafood gumbo and slow cooked in a thick court bouillon. The bottom line is that we are just covered up with redfish here on Sabine.

Our winter thus far has been very mild and staggering numbers of redfish continue to prowl the shallow flats and shorelines. Unfortunately the same cannot be said for the big trout that usually frequent these same flats. When we do find them, we are only able to catch a handful before the redfish crash the party.

I have, however, had some good days on trout up to five pounds vertically jigging tails on the 15 to 18-foot breaks along the ICW and Sabine River channel. This bite will survive the coldest weather and continue to improve if we can avoid any major rains. Both Toledo Bend and Rayburn are still very low, so significant releases shouldn't be a factor.

Not surprisingly, tide is still the key factor when vertical fishing the river. Get your bait on the bottom, move it in short twitches, and let the tide do the rest. A Hoginar is the most productive lure for exploiting this bite, but it is a redfish magnet. If you are specifically targeting trout, stick with a tail and a 1/4 or 3/8 head depending on the strength of the current.

The water is unusually clear both in the river and the lake and we have been able to get our catching done most days with Texas Roach, plum-chartreuse, and Stinky Pink over the past two months. Oddly enough, plum-chartreuse has worked better in the five-inch rat tail style while the other two colors are deadly in both lengths.

This time last year coastal anglers were buying every Corky they could find regardless of color. The folks at MirrOlure took care of the availability problem and most of us are back to fishing the Fat Boy and Devil a little slower knowing that a lost lure can be replaced the following day.

At least to some degree, the same thing is happening with any Assassin tail in Stinky Pink. Over the years there have been and still are basic colors that you must include in your saltwater arsenal, but every once in a while there is a game changer and this is one of those colors.

Texas roach can at times be difficult to find as well, but good luck trying to find Stinky Pink. Over the past two months it has not only caught fish when other colors worked equally well, but continued to catch fish on those days when nothing else worked at all. Consistency is the measuring stick for any lure or color and it has passed the test.

Assuming that the big female trout are going to show up any day now, I will spend much of my time on either the extreme south or north end of the lake. Both areas have flats that are bordered by very deep water and tide changes move a lot of baitfish. On the south end of the lake the shoreline from Garrisons to Green's can get very hot while the same can be said for the flats all the way from Pleasure Island to East Pass on the north end.

Coffee Ground Cove can also turn on big time as can Old River Cove. Because it is very shallow and difficult to wade, most folks never give Old River a second look, but that is a big mistake.

If the water clarity remains we will rely on lighter colors in the Fat Boy and Devil as well as the Catch V and MirrOdine XL. Electric chicken, pearl chartreuse back, day-glow, and pink patterns are very dependable with good water clarity. When they will eat a topwater lure, we do well with bone-silver and pearl chartreuse. Should the water dirty up, I will stick with the same lures in darker colors that offer a better silhouette.

While it sounds crazy, we have fished Corkys under a Kwik Cork and done well at times the last couple of years, but this year I have done even better fishing a TTF Red Killer under the cork. It is a wider bodied paddle tail grub not designed to swim well on a steady retrieve, but it darts erratically much like the Corky on a slow descent. The Kwik cork provides a little noise and simply keeps it in the strike zone the duration of each cast. Don't over work it!

Catch and release is a most enjoyable way to lose weight!