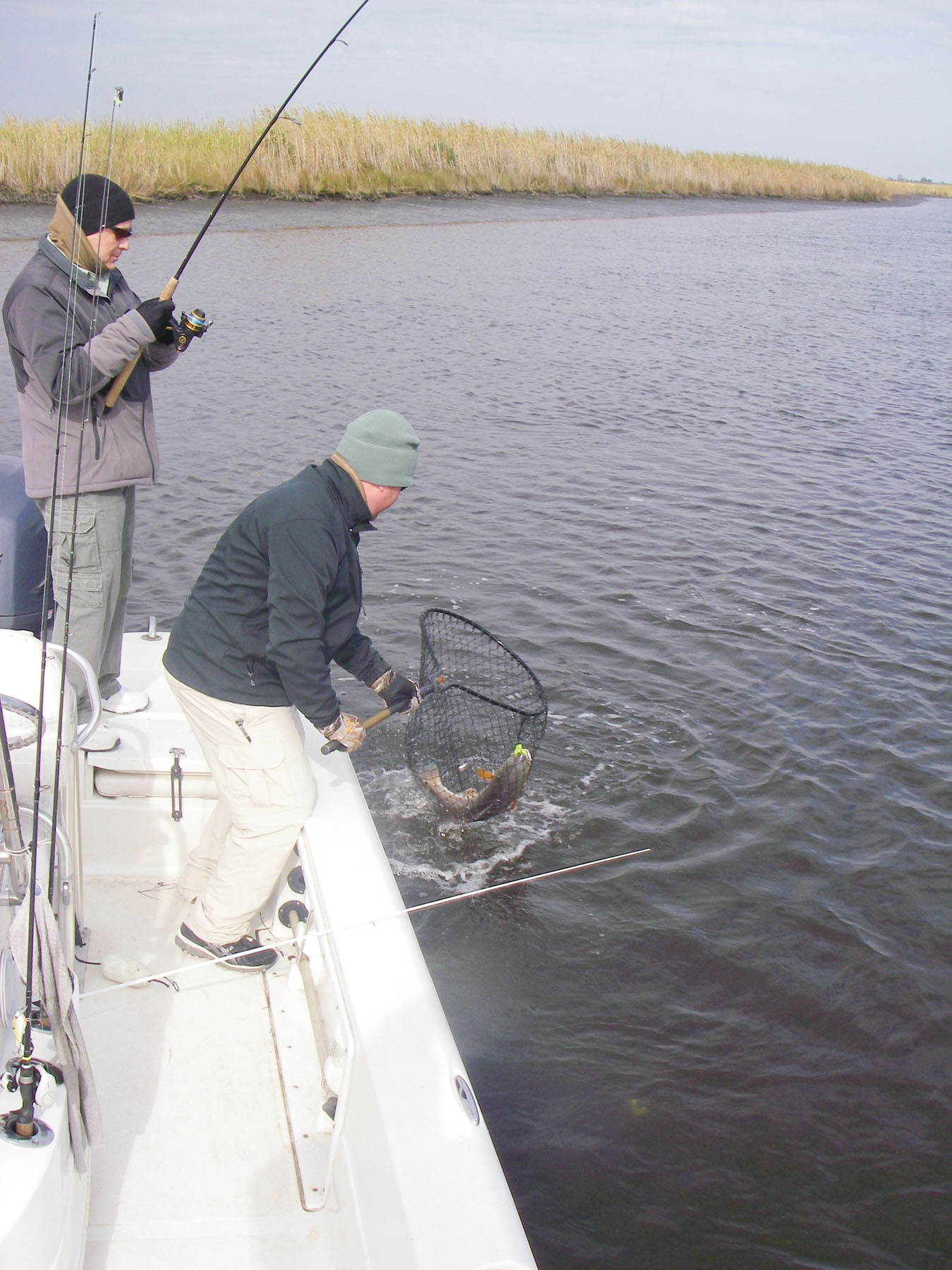 Bayou still dependable following a strong cold front.
Unlike much of the state, a shortage of rainfall has not been a problem here on Sabine. I don't know that there is such a thing as just the right amount of rain but, we haven't experienced any flooding and both the rivers and lake are in excellent condition.

Not surprisingly, the redfish bite is still all but a given most days. When we cant find them roaming the shallow flats or patrolling the east shoreline of the lake, we can usually find them in the bayous or either of the two rivers. We have had enough fronts roll through to force them out of the marsh and they are traveling no further than the nearest deep water.

I don't think there is a lure they wont attack when you find them bunched up. When they are holding on points or the mouth of a drain we are rigging Assassins new 4.5 inch Litl Tapper on -ounce heads using the tide to bounce it off bottom. When they prefer something a little bulkier we are doing well with the Die Dapper or TTF Red Killer.

For my money, the most enjoyable approach has been getting on the troll motor and working the 4 to 6 foot breaks along the shoreline with crankbaits and swimbaits, River2Seas Cranky M or Biggie in any chartreuse pattern and H&Hs 3 inch Usual Suspect in cock of the walk or black back shad are hard to beat.

Easily the best news of all has been the number of big trout caught over the past three weeks and the bite has shown no signs of slowing down. It is at its best during the brief warm ups between fronts, but anglers backing off the deep breaks along the ICW on the coldest days are still catching nice fish.

A seven pound trout hasn't been a show stopper lately for the cold weather grinders able to wade or drift the shallow flats two to three days a week. I know of three fish over 30-inches, unfortunately none of them released, caught in the last week of December alone. All three of those fish came 5-inch paddletails in 8 feet of water.

Without a doubt, the most consistent catches have come on incoming tides the last hour or two of the day. A few of the largest trout were caught by flats waders on the east side of the lake, but the better numbers up to nine pounds have come off the flats from the tip of Pleasure Island to Coffee Ground Cove.

Depending on water temperature, and it has been closer to 50 than 60 most days, suspending mullet imitations have worked best. The Corky Fat Boy in pink or day glow and the slow sink Maniac Mullet in the same colors have been very reliable. The floating version of the Fat Boy requires a world of patience and confidence to fish effectively, but our big trout just love it.

The lure we didn't fish much last winter was the Catch 2000, but we have done very well with it this year. It is a little smaller than most suspending baits and can also be fished on a quicker retrieve. When the trout are willing to exert a little more effort chasing their next meal the 2000 has been the hottest bait in the box. Mullet patterns and black/chartreuse have worked best.

The toughest decision on the better weather days has been whether to fish deep or shallow and then sticking with that pattern. Even when the surface temperature climbs on the flats during the evening hours there are still big trout that refuse to abandon the deeper water as long as the bait is there.

I haven't been catching as many good trout scratching the wall or vertical jigging as I have strolling the deeper breaks on the troll motor thus far. Covering more territory via strolling keeps your lure slowly moving yet still in contact with the bottom on a weak tide. Strolling is not as effective as vertical jigging in a strong tide as the largest of these trout are reluctant to chase a fast-moving bait.

The 4-inch Usual Suspect swimbait and the Die Dapper rigged on a -ounce head can be deadly choices, but I usually start with the Corky Devil or the Maniac Mullet. I also improve my hook up ratio and lose fewer baits by swapping the stock treble for one size larger and clipping off the opposite barb.

It has been several years since we enjoyed this kind of run on big trout and I had forgotten how exciting it is to fish every day with the real expectation of possibly catching a double digit. Hopefully, this is a trend rather than just one of those special years!