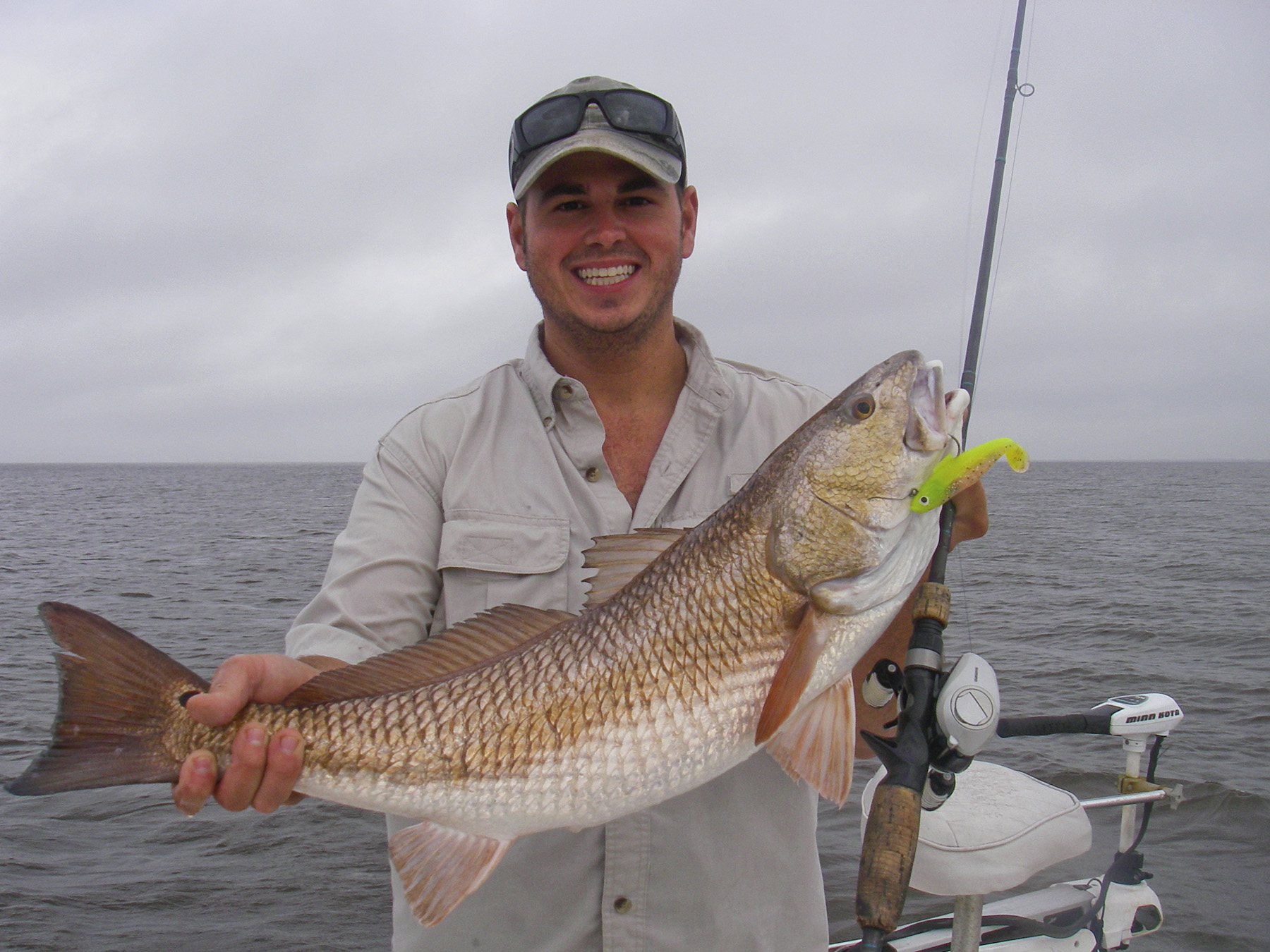 This nice red ate a Usual Suspect Swim Bait.
As we fish our way into the more challenging winter months of a new year, we can only hope that 2014 is as fisherman-friendly as 2013. It started off with a bang last January and only improved in spite of gusting winds that eliminated much of the lake seemingly every day.

Both the average size and numbers of trout were significantly better than we had experienced in years. Lots of visiting anglers caught personal best trout and even I caught and released more fish over seven pounds than I had caught since 2001. Ironically, every seasonal pattern was late to develop, but having to adapt might well have been the key to locating fish that we have been overlooking in the past.

For no obvious reason, the redfish were AWOL most of the year, but they more than made up for it in December and that incredible bite is still going on. The majority of my fishing takes place from mid-lake north to the Sabine and Neches Rivers and we have literally been covered up with redfish. Catching and releasing thirty to fifty a morning has required little more than being there!

While I don't think it was as good as the year before, we also enjoyed a consistent bite on larger flounder. The "catching" during the annual migration wasn't as prolific, but the average size throughout the year was excellent as we saw a lot of four to six pound fish. Because we spent so much of the year targeting only trout, I may well have missed the spring bite, which is much more indicative of how well the flounder population is actually doing.

Thus far, I have been covered up with folks hoping to take advantage of the redfish action. It has been so good, in fact, that we have been able to limit early and spend the remainder of the trip looking for trout. We haven't gotten shorted on cold weather this winter, but even the smaller trout are still showing up on the shallow flats in the afternoons.

We have spent the bulk of our time drifting rather than wading because the trout are not relating to any specific type of bottom structure like clam shell or sandy ridges surrounded by mud. Having said that, we are still able to bury the Talon as soon as we miss a strike or catch a fish and usually catch a few more before resuming our drift. The wind hasn't really been a factor, but because we are forced to cover so much water we have relied on a Maniac Mullet more than the Corky or Catch V as we can effectively fish it a little faster.

I fish every lure on a loop knot or occasionally on a speed clip for convenience sake when wading and I am convinced that the Maniac Mullet is far more lethal when it is not cinched down to the eye with a closed knot. By far, the majority of the strikes occur as soon as the bait starts to erratically sink following a twitch of the rod tip and tying dead to the lure eliminates much of that movement.

The Assassin Die Dapper rigged on an 1/8 ounce Shiney Hiney head is also a great choice when fishing these more aggressive trout. Once the larger trout show signs of chasing bigger meals a shorter distance, it is hard to beat the Corky Fat Boy on Sabine. For the most part it is a painfully slow way to search for the one fish you covet, but it gets my vote.

Don't overlook the revetment walls over the next couple of months. The rock is home to large concentrations of mullet and while the bite is seldom fast, it can produce bragging size fish even with little tide movement. If the mullet imitations don't work for you give a crankbait a try before abandoning the wall.

This may or may not come as a surprise to some big trout enthusiasts, but my clients and I will enjoy some great days this winter fishing the same doctored up cork and tail rig that I rely on in the warmer months.

I still fish a two and a half to three foot leader, but opt for the longer five inch tails like the 5-inch Assassin Sea Shad or TTF Big Minnow rigged on either an 1/8 ounce head or 4/0 Mustad Wide Gap worm hook. The lure stays in the strike zone throughout the retrieve, but the slower fall following each pop is the difference maker.