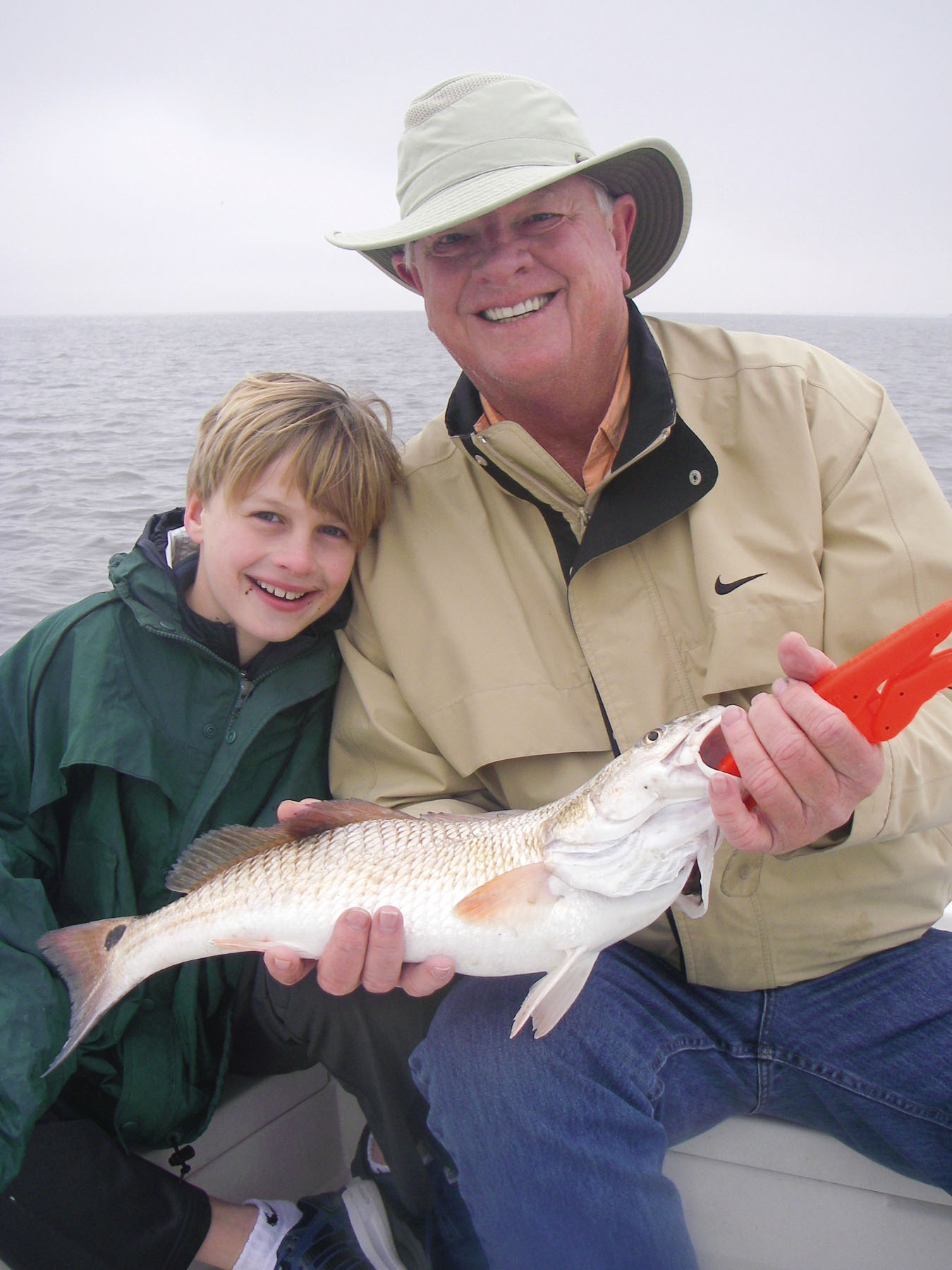 Larry Dierker and grandson, William, shared a memorable morning of "catching"!
I hope you have had opportunity to get your new waders wet and muddy while watching your cyclone-wrapped Laguna rod counter the power of a heavy trout.

It is too early to declare that like last year, every pattern is again running late. But even with mild weather most of December there are indications that we could be in for more of the same in 2015. While the "catching" has just been exceptionally good for both size and numbers, our marshes have been purged only one time and areas of the lake that were on fire by this time last year have not been as productive to date.

It is virtually a given that the annual redfish extravaganza will begin immediately following the second purging of the surrounding marshes. That process requires a couple days of outgoing tides and howling north wind. This has happened only once thus far and while it was "game on" for a few days, a south wind and big incoming tides flooded the marshes again scattering both bait and gamefish.

While that bite is verifiably late, it will take place at some point as there is no other safe haven than the nearest deep water once the marsh is reduced to mud. The more debatable indicator is leaner numbers of trout having yet to move into the more protected areas on the Louisiana side. No place on Sabine got pounded like Coffee Ground Cove last year and that unprecedented bite started early and lasted well into March!

If you joined that armada on a daily basis last year and couldn't wait until this year, do not let this "over the hill" fishing guide's report rain on your parade. Two things that we learned in 2014 were to suck it up and deal with the wind and this "late thing" has more to do with fishermen than fish.

There is no doubt that we have done a much better job of adapting this year and we have been rewarded for our tenacity. We caught more trout from six- to nine pounds this December than we did in the last four and the numbers of three- to five pound fish were up as well.

I have always quickly retreated to jigging deep water when the wind made the open lake tougher than I would like, but I have been slower to bail this year and it has paid dividends. We have done well when my Talon couldn't possibly hold and two drift socks only got us wetter.

We have discovered that the fish were still there and biting, but we weren't focused or determined enough to hang in there. There is no doubt that our most consistent bite for both big trout as well as numbers of solid fish is taking place on the shallow flats bordering the Intracoastal. These flats take a beating regardless of wind direction, but the big trout depend on the short swim to deeper water.

On calmer days everything from topwaters to five-inch tails will work. We have done well recently with the One Knocker and She Dog in black or pink/silver while choice of tails depends entirely on water clarity and angler confidence. A five-inch Die Dapper rigged on 1/8 head is my first choice. With mullet imitations like the Fat Boy, MirrOdine XL and Maniac Mullet I am more inclined to pin my hopes on day glow or pink.

Aside from refusing to deal with the wind, the single biggest mistake you can make in exploiting this bite is to take a confidence hit due to badly silted water. The fish adapt quickly and the strike zone will be restricted, but they will still feed!

If I still haven't talked you into enduring a little discomfort for a shot at a big trout, the deeper bite in the river and ICW remains a comfortable Plan B. Breaks in 12 to 15 feet are the best place to start your search and tails and mullet imitations work equally well. And, while I tend to hunt fish frequently with a four-inch Usual Suspect, it is also a winner when jigged vertically at these depths.

If you have yet to try a pair of Salt Life sunglasses you need to do so. I have not had a single client that wore mine for even a little while that did not order a pair of their own. I know the Zeiss lenses and light frames deserve and get the most ink, but I most appreciate the fact that water doesn't accumulate on the lenses when driving in the rain!