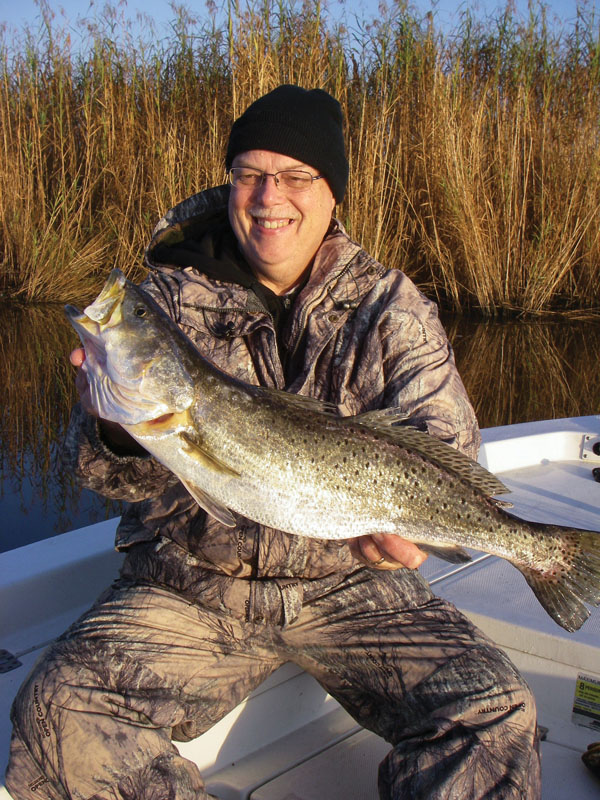 Nice trout for Mike Dore on a cold morning.

I was worn out after a less than stellar day of wade fishing and had already pressure washed enough mud off the floor of my boat to plant a garden when a neighborhood youngster unexpectedly tapped me on the shoulder. "Mr. Colburn–can I just climb up in your boat for a second when you are through," he asked.

His request provided ample reason to take a break and I welcomed him aboard. Prior to his insisting that he help me finish the job, he stood behind the wheel as if he were in the middle of the lake, inspected every compartment and asked questions about the myriad of lures piled on the console.

He had never failed to waive when walking home from school, but apparently felt a little too intimidated to introduce himself. Following his courageous decision, we admired our cleaning efforts, shared a Coke and discussed everything from wade fishing to why algebra was so doggoned hard.

Aside from catching an occasional catfish in a nearby drainage ditch, he had never caught what he considered to be a "real" fish, yet there was very little that he didn't know about bay fishing. "I read your column in the paper and every page of the Texas Saltwater Fishing Magazine when a friend gives me his dad's old copies."

"Last year my grandmother took me to the Houston Boat Show and I met some of the guides that write for that magazine." In the same breath he quickly added, "It was so cool, and the lady that owns the magazine gave me a decal and a hat."

He has since become a regular at the house and while the "no fishing until you pass algebra" rule has temporarily put our initial trip on hold, he now has more than enough tackle to be successful when it does. I am ashamed that had he not taken a deep breath and made our first meeting happen, his dream would probably still be no closer to becoming a reality.

Those of us blessed to make even a portion of our living in the fishing industry would do well to consider shows and seminars as more than a hassle or necessary obligation to a sponsor. A large number of those folks standing in front of your booth are far more interested in what you have to say than anything you have to sell!

Even more importantly, you don't have to be a guide or professional fisherman to be held in high esteem by a youngster or, for that matter, anyone hoping to learn more about fishing. Make yourself more accessible and openly willing to share your passion for fishing and you will enjoy fishing even more than you ever thought possible!

So much for my going overboard with that discourse, but getting more kids on the water is a win-win situation for all of us and there is no better time to start than right now.

On the heels of catching a break with local rains and the SRA finally able to cut back the discharge rate on Toledo Bend, we experienced three weeks of better than expected catching in late-December. A surprising number of trout in the six to eight pound range were taken by both waders and boat fishermen and the redfish provided a dependable Plan B.

By the end of the month, however it was deja vu all over again and as of today one generator is running 24/7 with flood gates open as well. The lake has not been below pool level this entire month and they are currently dumping more fresh water at a rate of 41,000 CFS!

We were forced to learn to deal with the negative effects of a glut of fresh water all of last spring and I am hopeful that some of those tactics will work in cold water as well. Thus far we haven't had any really cold weather and surface temperatures have held at a balmy 60 to 65 degrees most days.

While we are not catching as many, we are still catching at least a few big trout most trips. The water clarity is not great, but suspending baits like the Corky, Maniac Mullet, Soft-Dine XL and Catch V in pink and chartreuse patterns have been our most productive lures. At this point, it does not appear that reduced salinity impacts the larger trout as much as they do the smaller fish.

Either way, the bite is currently good enough to warrant a little physical discomfort. Take advantage of pre-frontal windows and warmer afternoons when they coincide to put the odds in your favor. We'll know a whole lot more by the end of next month!

The future of fishing is in the hands of the kids!