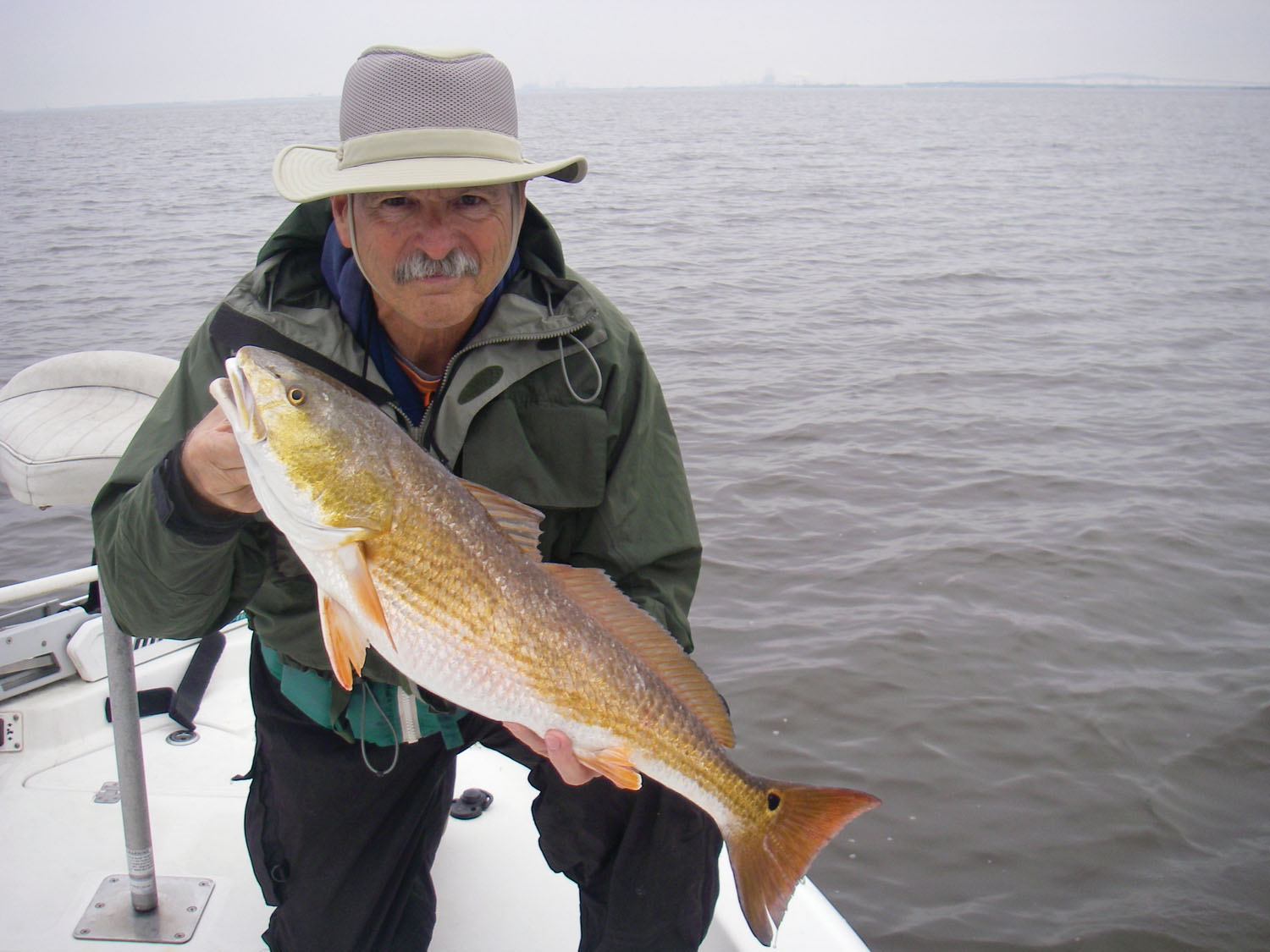 Another “just for fun” redfish!

"Maybe you just need to go back to square one and fish your old spots," proposed Gene Locke while digging through his Corkys for a color that might work. "It wasn't until the nets were removed and the visiting Troutmasters showed us the benefits of targeting the shallow flats that we even realized what we had been missing."

We are finally starting to catch more two to three-pound trout on a regular basis again, but any fish over the five-pound mark now merits a second look. That was not the case even as recently as two years ago. For years, the big trout bite was so prolific that local anglers took it for granted. That is no longer the case!

Two years of excessive flooding and a growing number of more astute anglers haven't made things any easier, but the fact that we are once again seeing better numbers of solid 18 to 20-inch fish is encouraging. Fewer reports of big trout could also be the result of more fishermen now content to simply look for bites than patiently target quality fish.

There has absolutely been far less wading pressure on the shallow flats thus far and even the drift fishermen are making technique alterations that will generate more strikes. From the Causeway all the way to Middle Pass, anglers are fishing shorter tails and smaller topwaters to catch more fish.

Five-inch tails like the Assassin rat tails, Split Tail mullets and Die Dappers rigged on 1/8-ounce heads have taken a backseat to their more productive smaller counterparts like the Sea Shad, Lil' John and Vudu shrimp. More anglers are also fishing tails under a cork than ever before and fewer folks are even bothering to wait out a bite on prime structure.

For those reasons alone, catching larger trout is more accidental than the result of any dedicated grinding. The good news is that, at least for right now, the water clarity is fantastic, warmer than usual, and there are still enough shrimp in the lake to keep the reds and those smaller trout in a hunting mode.

Some of the more consistent fish catchers have lengthened the leaders on their cork rigs and are fishing their smaller plastics much deeper. A two to three-foot leader has given way to a four to five-foot leader, but while it generates more bites, I have never found that change to be as effective for big trout.

In fact, we are still catching fewer but larger trout staying with the shorter leader and the longer GULP Jerk Shad. The bonus to this combination is that the redfish cannot leave it alone. I love to catch big trout, but I still have to catch a lot of reds before running off in search of a better bite.

For those of you that have called or e-mailed questions about fishing the cork and tail rig, this is the setup I use to fish it year 'round. I fish a 1/8-ounce jig head tied on a 24 to 30-inch mono leader under an oval TKO cork. For ease of casting on even the windiest of days, I fish a Shimano 3000 Stradic filled with 20-pound Power Pro under a 7-foot medium action Laguna spinning rod.

At times I swap out the lead head for a 4/0 worm hook for an even slower fall and tie everything on with a loop knot for more life-like lure action. Warningthis technique can be addicting. Especially when everything else fails!

We very well may see a great bite on the deeper Causeway reefs this month, but I would not pass up the revetment walls or wading what is left of the barrier islands on the north end of the lake. If the winter remains mild, She Dogs, Swimming Images and 4-inch Usual Suspects can all get red hot. The key to fishing the wall is determining if the fish are holding next to the rocks or a full cast away.

If the water clarity holds up and 4 to 6-inches of visibility is sufficient, I will spend the last few hours of most days fishing a Fat Boy or topwater in less than four feet of water. Plan on staying late and never pass up a good incoming tide.