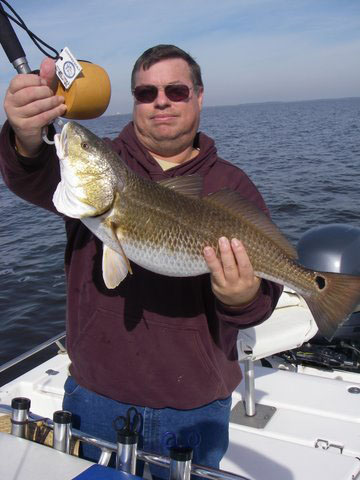 Mike Cooley released this nice redfish.
I had no sooner started on this column than the thought occurred, "Of what value is it to the reader when I begin every report with a recap of what has already happened the previous month?" Sufficiently stymied at that point, I shut down the computer and went fishing.

I later decided that if the weather conditions were included for comparison's sake, the column would be of even more value next year than it is right now. While my expectations for the upcoming month are based on years of experience fishing Sabine Lake, the weather alone could ship wreck the forecast. The recap is admittedly old news, but if you are wise enough to save these magazines, you will have a record of the patterns and lures that actually worked for the guides each month.

Due to all of the flooding last spring and the early summer, every seasonal pattern has been late in developing. We saw very little rain from mid-October through the end of the year and that is a good thing for the saltwater angler on the upper coast.

We enjoyed a phenomenal fall season splitting time between drifting the flats on the north end of the lake and taking advantage of the big trout that showed up in the river. It was a hard choice to make each day and only got harder when the birds started working over acres of slot redfish and trout in early December.

We caught more trout over six pounds in the river in November and early December than I had caught in the past three years. Ironically enough, we would find the fish each day in 3-5 feet of water or 15-22 feet of water.nothing in between. When they were deep, we had best success with vertically jigged Assassin Sea Shads in pumpkin, Texas roach, or glow-chartreuse bounced off the bottom.

When we would find them in the shallow moss, we used the same Sea Shad rigged on 1/16th or 1/8th ounce heads as well as MirrOLure's new Mirromullet. It is on the smallish side as topwaters go, but it behaves more like a finger mullet upon retrieve than the real thing. The big trout were more skittish when they were in the shallow grass and the subtle presentation of this mullet imitation was just the ticket.

I was beginning to think that the bite on the shallow flats was not going to play out, but it finally slowed down last month. We caught a world of very solid trout, drifting 3-5 foot flats with longer plastics like the Assassin eel rigged on 1/8th ounce heads, Catch Fives, and She Dogs. I have never fished so much bone-chrome in my life, but you could not go wrong with that combination.

We also had a better than average flounder run that I all but missed. We caught some big flounder fishing for trout and reds, but the folks that targeted flounder did very well this year. The average size fish was better and the fishing on the shoreline of the main lake was much more consistent.

I don't know if everything being late the year before magically becomes early when you move into a new year, but it looks like there will be as many fishermen still chasing gulls as there will be wading for trophy trout this month. You can expect a hiccup or two in the weather, but do not let that slow you down if you have big trout on the mind.

While most of the Texas coast has trout-green water, we are more accustomed to trout-brown water on Sabine..especially in January and February. We will catch big fish in 48- degree water that is so muddy your She Dog will leave ruts on the surface!

Expect a more consistent bite on the flats on the north end of the lake only because the trout have such easy access to deeper water should the conditions go to pot overnight. The short trip between safe haven and the next easy meal will keep them there all winter long.

The flats between Johnson's Bayou and Blue Buck will also produce their share of big fish as well. The combination of the warmer mud, which can make wading a chore, and the deeper water of the bayous will attract both predator and prey on the coldest of days.

Both the Catch Five and the Catch 2000 have earned their stripes on these flats as well as the Corky and Crazy Croaker. On some really tough days last year, I downsized with a MirrOdine and caught big fish when nothing else would work for me. The lure mimics an injured shad in the water and in spite of its diminutive size; you can still throw it a mile.

Rapala recently released a lure that may well dominate the winter scene if you can make yourself tie it on. They are almost too pretty to let a fish chew on and that will happen with this lure. The new X-Rap Sub-Walk resembles a Corky with a bucktail.

If you can cast and wind your line back on the reel, you can "walk the dog" with this new lure. The catch is that you will be "walking the dog" beneath the surface. The Sub-Walk suspends so that you can more efficiently probe that narrow column of water covering shallow grass, but we have already caught fish on it over all types of bottom and structure in 2-8 feet of water.

Do not forget that extra change of dry clothes when winter fishing. They could save your life, your partner's life, or both!