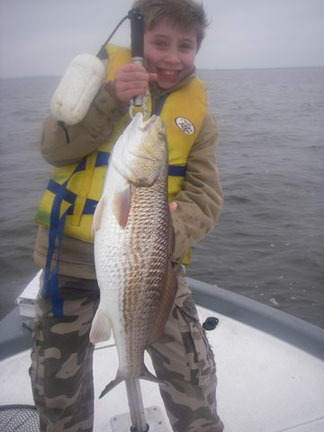 Ryan Pittman was just a little bit excited about catching his first slot red!
We are back to working a little harder following two months of incredibly easy fishing under the birds, but the crowds are thinner and the fish are larger. Very little rain and an elevated salinity level made it all too simple for folks fishing on Sabine Lake all the way through mid-December.

Most of the shrimp have exited the marshes and our water temperature has dropped steadily with the passage of each front. Mullet are now the number one entre for the heavier trout that shop the shallow flats during the warmer hours of the day.

If you have fished Sabine in past winters, or more importantly, if you have waded these waters during that period, you may have to re-learn your favorite spots. The bottom has washed out in many areas leaving it mercifully harder, but the water is deeper. Familiarity could fill your waders with cold water if you fail to check the depth prior to exiting your boat!

The popular stretch of real estate between Madam Johnson's and the Gator Hole on the Louisiana shoreline was also devastated by Ike. It is easier fished from a boat than attempting to wade through the mounds of mud and marsh grass.

Aside from getting a lucky draw with the weather, the key to consistently catching fish this month is being more concerned with the presence of bait than the structure or water clarity. If the tides and the warmer hours of the day coincide, consider it a blessing, but the absence of bait fish makes for lots of practice casting.

We have also discovered that there is now more exposed shell on the flats on the north end of the lake and that the trout are spending a lot of time hustling meals where the mud meets that shell. We wasted a great deal of time fishing the middle of this new structure only to figure out that the fish were hanging on the edges. The most productive shell for us is located in 3 to 4 feet of water.

When the surface temperature hovers around the 50-degree mark, Catch V's, 2000's, Corkies, and the Crazy Croaker are all hard to beat. During the warmest hours of the day, the MirrOdine XL, She Dog, and the smaller Skitter Walk are effective choices as well.

When the fish are aggressive enough to hustle the topwaters, we also do very well swimming an Assassin Texas Shad rigged on a one eighth-ounce head. The water will dictate our color choices, but pumpkin-chartreuse, glow-chartreuse, or red shad will usually get the first shot.

The wild card for a really big trout this month could be figuring out how to exploit those debris covered flats on the Louisiana shoreline. We caught some nice trout as well as good numbers of redfish drifting through all of that rotting vegetation this fall and the fish are not going to leave as long as the bait is in there.

Last, but certainly not least, be especially careful running the Louisiana shoreline between Coffee Ground Cove and Willow Bayou. I haven't torn anything up after hitting several of the submerged mounds of matted grass and mud yet, but they will bring you to an abrupt stop!