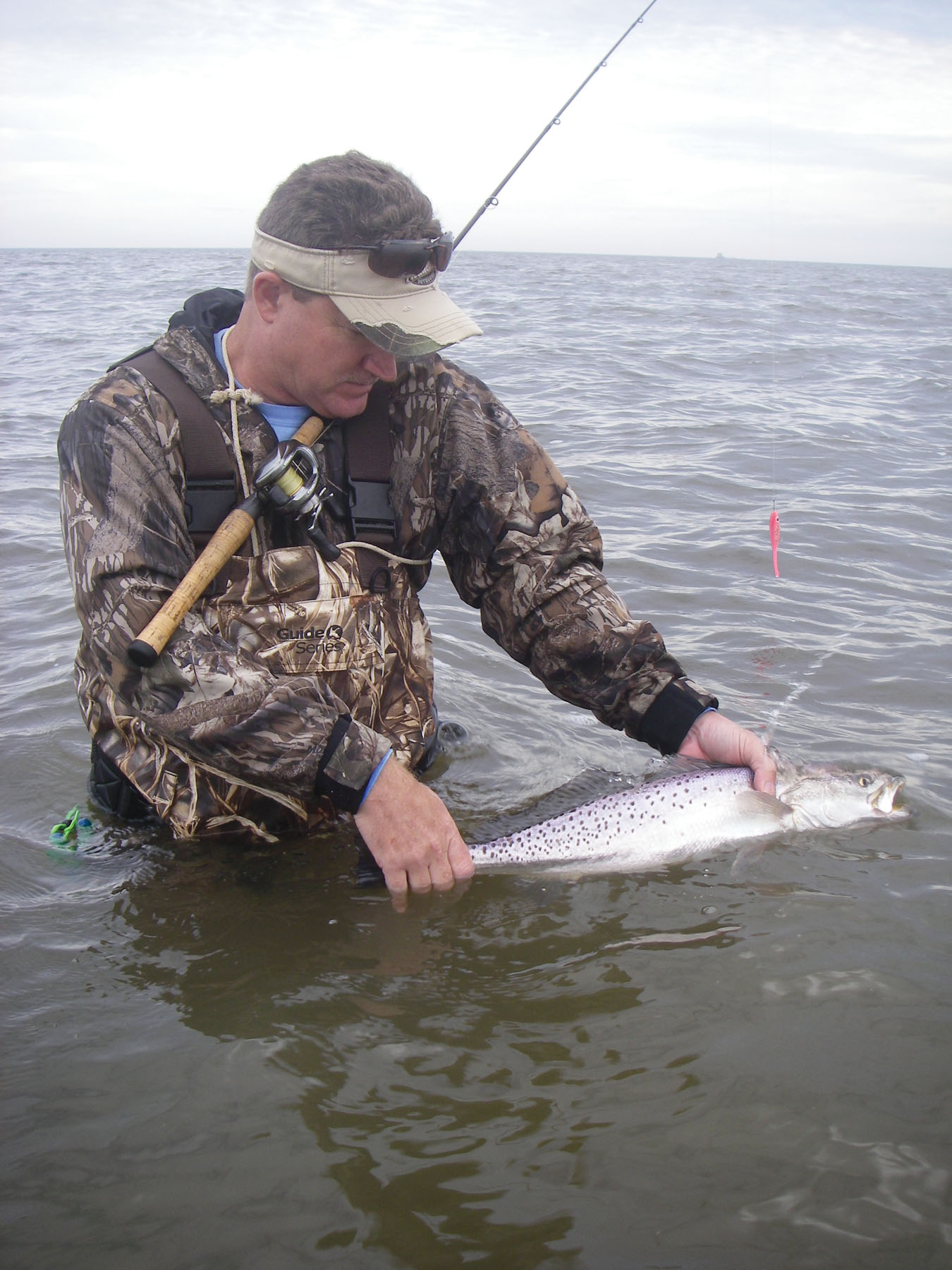 Brad Deslatte gives another solid trout a second chance.
While the fishing in general on Sabine Lake over the past month has been even better than anticipated, it has been especially good for determined anglers willing to brave the elements for multiple swings at trout in excess of 27-inches.

The big trout bite actually started even earlier, but the handful of anglers already taking advantage of it found it easy to keep it quiet due to a phenomenal bite under the birds that refuses to end. A mixture of slot reds and trout up to four pounds still banging away at the last of the shrimp migration continues to draw the most attention from local anglers.

As early as mid-November, anglers with trophy trout on the brain were already taking fish up to seven pounds off shallow flats that traditionally do not heat up until early December. Because the water was still in the mid-60's, topwaters like the noisy She Dog and more subtle Top Dog Jr were fooling the largest of the trout. When the fish will only slap at those choices, a MirrOlip crankbait or a Yo-Zuri jerkbait will usually seal the deal.

As the surface temperature continues to slide downward, topwaters have given way to Corkys and suspending mullet imitations like the Catch V and the MirrOdine XL. The jerk baits are still deadly during the warmest hours of the day, especially when you fish them with a jerk-pause-jerk retrieve that keeps them just below the surface.

The Fat Boy and Corky Devil in pink, day glow, and strawberry-black will get it done most days. The best colors for us in the suspending baits have been electric chicken, bone-black back, and gold with a chartreuse back and belly. When the water is exceptionally dirty, we have saved a number of trips with both the Corky and Catch V in black-chartreuse.

The flats on the north end recover the quickest regardless of how dirty or cold the water is due to the close proximity of the ICW. The fish simply ease off into warmer depths supporting sufficient salinity and suspend until hunger pangs necessitate a brief shallow water foray. On even the rawest of days, at least a few trout worthy of your personal discomfort will be on the prowl.

The single biggest mistake made by visiting anglers is avoiding a promising area due to the lack of water clarity this time of the year. Our water is never very clear under the best of circumstances as you can usually track coons in three feet of water well into March on Sabine.
The solution, aside from developing a little confidence, is to slow down your retrieve, stick with darker colors and larger profile lures, and take advantage of both rattles and spray-on scents.

Fishing a quality braided line will also help in detecting the most subtle of strikes. I added two techniques to my winter fishing arsenal last year that have already served me well so far this year. When swimming a longer plastic like the 5-inch Assassin Shad or MirrOlure soft-mullet, I soak it with Bang garlic scent and add a glass rattle to my jig head.

I initially inserted the rattle into the plastic body, but I would lose one every time a fish ripped the body off of the jig head. A better solution was attaching the rattle to the shank of the hook with electrical connection shrink wrap tubing. It won't help with the loss of tails, but your rattle will stay in place.

Last January, desperate to keep clients in the game that just could not fish a Corky slow enough, I stumbled onto a technique that has proven to be the real deal. I tie the Corky on an 18-inch leader and let them fish it under a Bass Assassin Kwik Cork. The clicking noise may help as well, but more importantly, they are keeping their lure in the strike zone and catching fish!

I have already had several clients catch their personal bests under the Cork. Every body of water fishes a little differently, but here on Sabine, the three largest of those fish ate a Corky Devil. The original Corky, however, has produced the most fish.

You can outsmart a big trout time and again, but you can only kill her once!