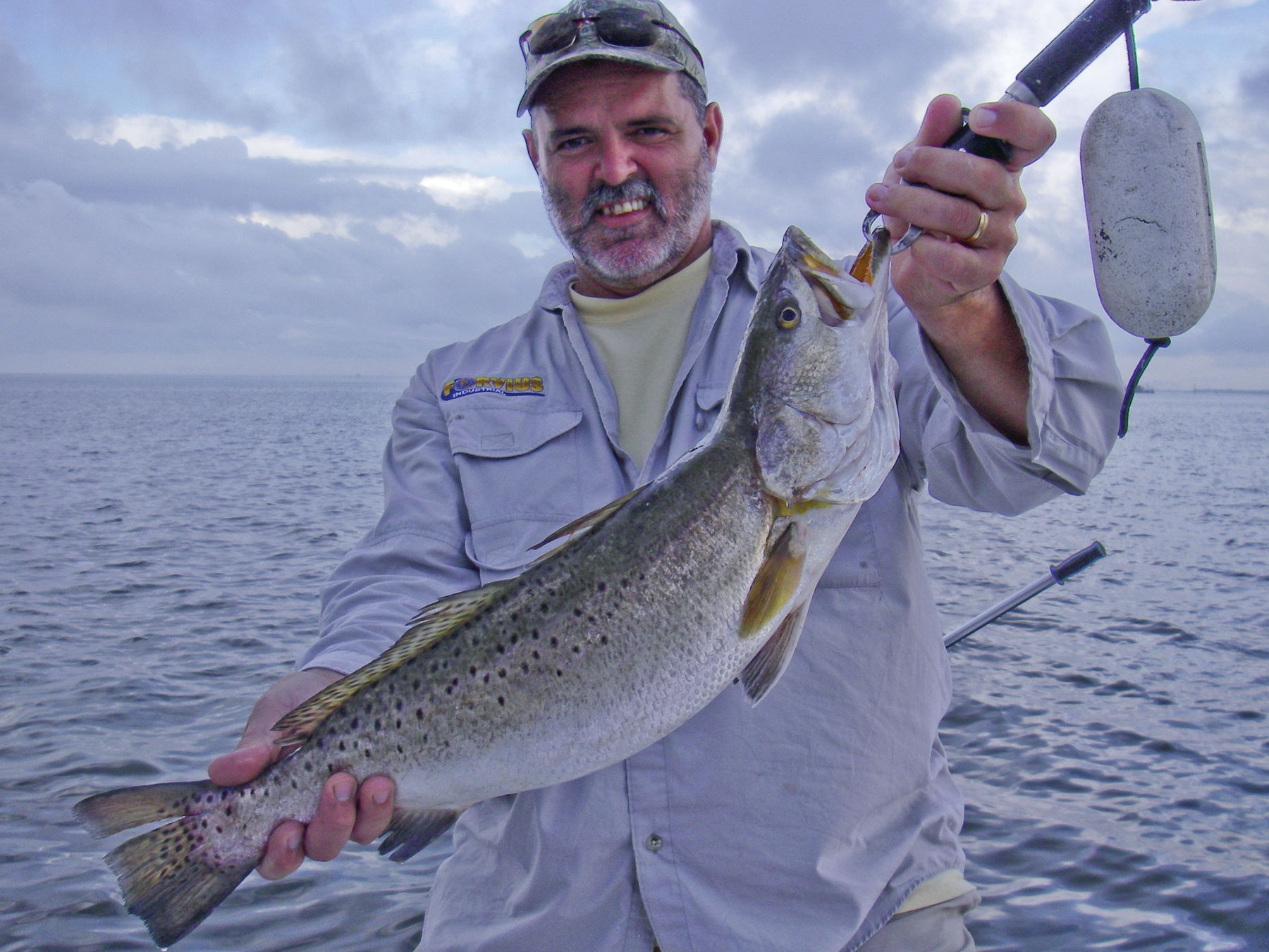 Howard Wolfe fooled this nice trout with a 5" Assassin and put her back!
I know that before this month is done the wind will howl at least every other day, the water clarity on Sabine will be reduced to six inches of visibility or less and the largest females in our trout population will eat Corkys. Thus far, however, the wind has not been a daily problem, the water is as clear as I have seen it in years and our larger trout currently prefer a 5-inch Assassin Shad over a suspending lure.

We have caught a handful of trout in the seven-pound class on both Corkys and Catch V's, but the quality bite on tails has made it difficult to continue grinding away with suspending baits. If we were only catching better numbers, I would opt for the slower bite, but that has not been the case. We are catching just as many big trout both swimming the 5" shad on a 1/8 ounce head and hanging it two feet under a Kwik Cork as we are on the mullet imitations.

This is not the norm and I expect it to change each morning, but I am not cutting one off the end of my line until it does. While there is still some fishing under the gulls, the more coveted trout are stalking the flats for larger prey and the longer plastics apparently mimic the desired entree.

While the change in tactics has worked well thus far, I would still sooner leave home without my waders than to not pack along a box full of Corkys, Catch V's and MirrOdine XL's. I have no idea how long this unexpected tail bite will last, but some of the hotter colors are morning glory, roach, and red shad.

I am going to assume that the weather and water conditions will continue to deteriorate and that dirtier water will dictate a return to more traditional patterns. Should that happen, the Corky and hard plastic mullet imitations will once again rule the roost. I have done better with the XL than the Catch V of late, but only because it fishes a little differently and has been getting more playing time.

Many local folks prefer to drift the shallow flats this time of year and they do very well at times, but the wade fishermen still enjoy the most consistent bite. Both groups are forced to share a very limited amount of potentially productive real estate and a slow wade is a more efficient approach.

Unlike some other venues, trying to cover a lot of water wading on Sabine is not the best option. It may take you a trip or two to ferret out key areas, but we do much better targeting isolated shell or small changes in bottom structure and simply waiting on the fish to come to us. No one will have to suggest that you might want to slow down after dealing with the knee deep mud bordering some of the most productive spots.

The easier wade is on hard bottom flats bordering the ICW on the north end of the lake. While equally productive, the mud bottom on the Louisiana shoreline makes it a more difficult. Small marsh drains and bayous draw the most attention, but small isolated patches of shell are the trout magnets.

I have always done much better fishing incoming tide on the north end than I have on the Louisiana flats throughout the colder months. A big high tide in the afternoon only enhances your odds. It is also not at all unusual to never see any surface activity until the last thirty minutes of daylight so don't bail on good structure too quickly.

While we tend to curse their intrusion when waiting out trophy trout, you can expect redfish to crash the party at some point most days. They will hit anything and invariably lay a good trout bite to waste. This time of the year most of our redfish are on the upper end of the slot or larger so expect to be locked up in a tug of war.

It is not a bite worthy of hanging your hat on, but on colder days we will spend the morning chasing stripers and redfish in the river while waiting for it to warm up. At least for me, jigging a Hoginar off the bottom at depths of 15 to 25 feet is the most productive tactic.

When we are fortunate enough to find the water pouring out of the drains and bayous we can catch them on everything from tails to topwaters. A silver sided Catch V with a green back is a deadly option should you find yourself in the midst of a school of surface feeding stripers. Never count on that bite lasting very long and don't ever bank on it happening two days in a row.

It only takes one cast to fulfill a dream!