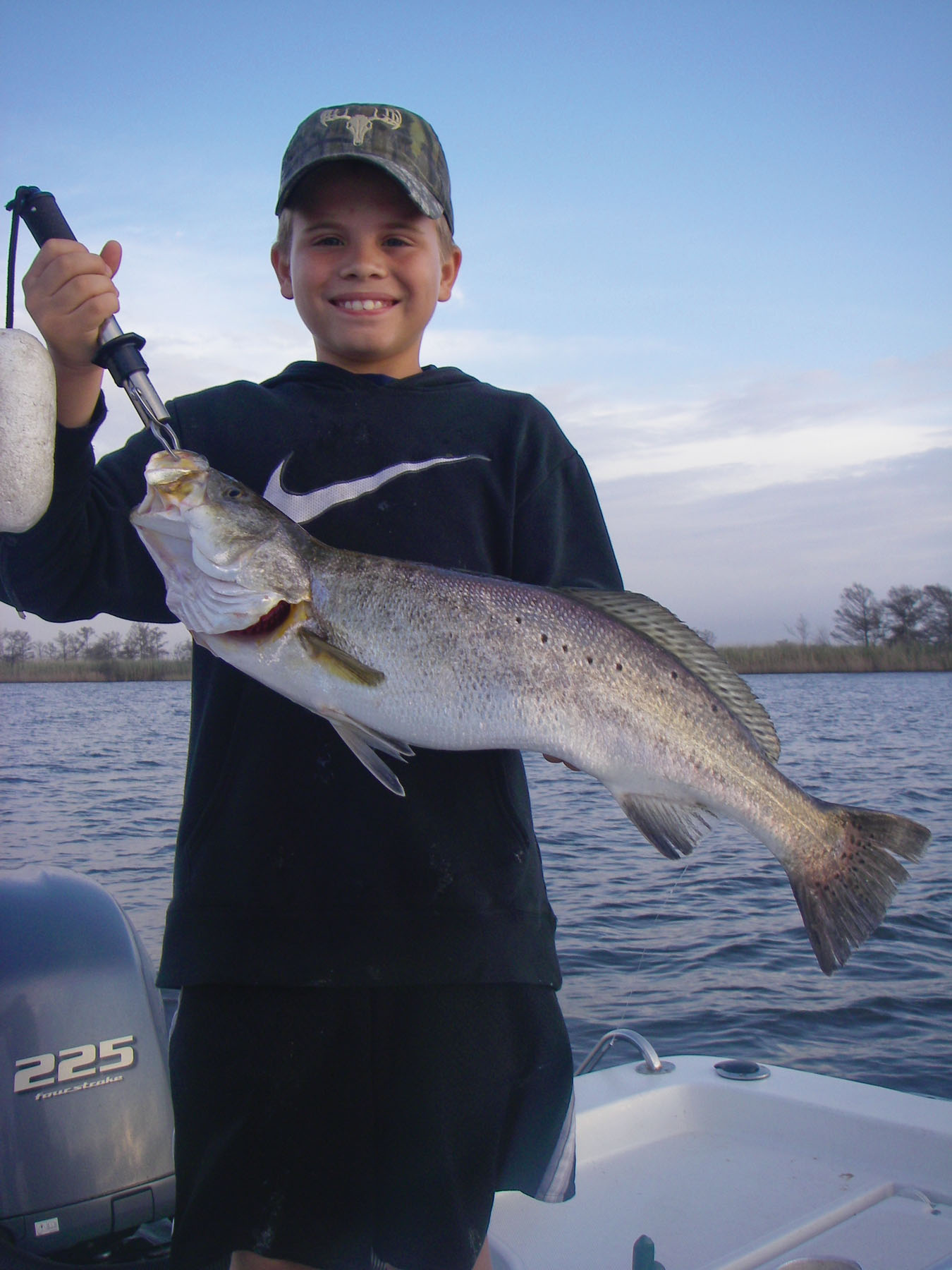 Alex was pleased with this arm load of trout.

While Toledo Bend and Sam Rayburn continue shrinking to unprecedented levels, the never-ending drought has been the gift that keeps on giving for Sabine Lake fishermen. However, as good as it has been for the short term, I still can't help but believe that the entire ecosystem will suffer from these high salinity levels in the future.

Only Mother Nature can remedy that problem somewhere down the line and for the time being, Sabine Lake anglers could not be happier with the phenomenal bite that we have enjoyed over the past two months. Due to the high salinity levels in both rivers, any wind that churns the open lake into an unfishable sea of whitecaps are little more than an inconvenience.

We are catching trout, redfish, flounder and stripers above I-10 on the Sabine and the bite on the Neches is equally good nearly that far upriver. Stripers are always a bonus, but the bigger surprise thus far has been the size of the trout. Not only has the average size fish been very good, but we caught more trout over seven-pounds in November than we caught in the lake in the past two years!

Surprisingly, we have been able to catch as many big trout in 2 to 8 feet of water as we have at depths of 15 to 20 feet. That in itself is unusual as vertical jigging deep structure traditionally yields not only the larger trout, but our stripers and reds as well. A Hoginar, Assassin's 5" Texas Shad, a Trout Killer or a Split Tail Mullet rigged on 1/4 or 3/8 head are all deadly when lowered straight over the side and bounced on bottom.

The fish obviously have to be there to catch them, but I took a lesson learned last winter in the lake to the river this year and it has proven to be just as effective in the shallower water. When the redfish absolutely dominated our wade fishing last winter I started drift fishing in 5 to 6 feet of water as a last resort only to discover that the trout had been hanging out there all along.

A Corky Fat Boy, a Devil and a Catch V were all excellent choices for those suspended fish most days, but the lure that was even more consistent was an Assassin Die Dapper retrieved like a swimbait on a 1/16 head. It sinks ultra-slow and the big paddle tail vibrates like a spinner bait on a slow retrieve. The larger profile more closely resembles a mullet and every strike is an all out assault.

Long story short, it has been working the same magic on big trout in the river holding on the shallow points and small flats. We are finding a lot of these fish with the Corky Devil or a Maniac Mullet only to follow up missed strikes with the Die Dapper to close the deal.

The bite under the gulls has finally slowed down but there are still some working the ICW and the bayous on outgoing tide. The trout under them are usually 15 to 18 inches at best, but it is not unusual to find slot reds mixed in. You can catch them on a variety of lures, but the better option is to lob a tail on a 1/4 head into the melee and hope that it sinks through the smaller fish.

I haven't gotten my new Gulf Coast breathables wet enough days thus far to fairly assess the numbers of redfish prowling the shallow flats versus the numbers of trout, but that will have changed by the time you are reading this. It was redfish nirvana by this time last year, but thus far there has been a pretty good balance.

The last time the main lake was this clear this late in the year, we enjoyed the best big trout bite I can ever recall. At some point every afternoon sow trout would leave the ICW and wreak havoc on schools of mullet on the shallow flats. Nearly every day someone would catch and release a new personal best and we may very well see the same thing this year as I don't see the lakes releasing much fresh water any time soon.

If that same bite occurs, I truly hope you have opportunity to drive over and catch your own personal best. We are much smarter and more efficient fishermen than we were back then so I also hope that you will practice catch and release should you find yourself waist deep in a herd of dream trout.