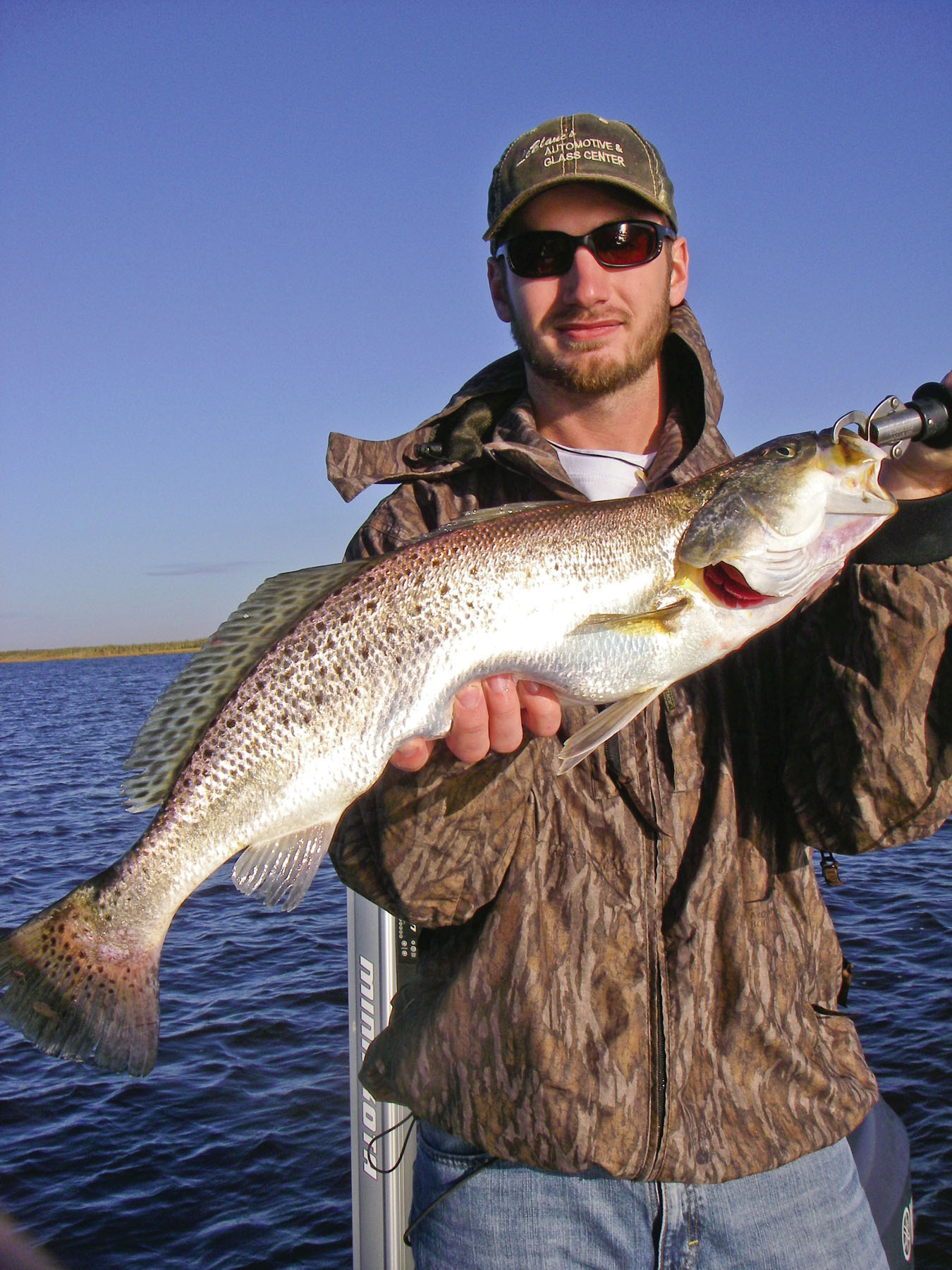 Big trout bite kicked off week before Thanksgiving!
Mother Nature suddenly decided it was time for winter and in less than eight hours another muggy fall was history, and then she hammered her point home with four straight days of wind, rain and near-freezing temperatures. Four days of winter would be enough for me if not for the fact that cold weather makes our largest trout more vulnerable.

Surprisingly, the big trout had already tired of running shrimp and headed to the flats bordering deeper water in search of mullet. They apparently sensed the arrival of that frigid blast as that bite turned on the week before. They were sharing the flats with a few smaller trout but many were in the four to five pound class along with a few in the seven to eight pound range.

We are still seeing just enough bird activity to keep the less-demanding anglers entertained, but those in the know are holding tight for a quality bite in lieu of hoping to hit a homerun chasing terns and gulls. For the most part the birds are ratting out only small trout and redfish. You cannot hang your hat on this bite as they are here today and nowhere the next.

Enough water was blown out of the marsh and the surface temperature dropped enough to ignite a deepwater bite in the Intracoastal and the river. Thus far, five inch paddletails such as Assassin's Die Dapper and TTF Flats Minnow XL have worked better than the mullet imitating Corky and Maniac Mullet, but that will change by the end of the month.

Once I can mark multiple fish packed on deep structure, the Corky, Maniac Mullet and four inch Usual Suspect are usually the better choices. I occasionally "stroll" these fish with the troll motor on weak tide changes, but "scraping the wall" is the preferred presentation. Also, regardless of your affinity for braid, zero-stretch line makes a huge difference in detecting a subtle tap in deep water.

Incoming tides are the name of the game, especially when they start in the warmer afternoon hours. You never know exactly what time the bite will light off and it may be brief, but the odds swing in your favor between lunch and that inevitable, "Why did you stay so long" greeting when you drag in after dark. These hours don't work well for guiding but they sure work well for catching big trout!

The presence of bait on the surface bolsters angler confidence but not a show stopper when wading or drifting Sabine. The same is true when forced to fish muddier water than you would like. We are currently finding clearer water and more mullet on the flats on the Louisiana shoreline, but the Intracoastal provides a safe haven for both bait and trophy trout regardless of water clarity and it is only a cast away from the shallow flats on the north end of the lake.

The mouths of Johnson and Madam Johnson, Whiskey, Greens and Willow bayou (if you can avoid the crab traps) have been very dependable of late and should only get better this month. Most of these feature small patches of shell that are fish magnets on the tide changes.

On the other hand, the bottom is much more wader-friendly on the lake side of the islands on the north end and the Intracoastal hosts an endless supply of fish holding structure only a short swim from nearby flats. The most reliable spots on these massive flats that run all the way from the tip of Pleasure Island to East Pass are isolated patches of shell. For that reason alone, most of the wade fishermen on Sabine homestead a clam bed or patch of oyster and wait for the fish to arrive.

When at least modestly protected from the wind, the north revetment wall can also be lights out for boat fishermen this month. Bouncing a five inch tail or crankbait off the rocks works well at times, but the more dependable choices are the Corky Fat Boy and Maniac Mullet in day-glow or pink. On days when fish hit but won't take the lure, I have occasionally saved the day by switching to the smaller Catch 2000 or MirrOdine. Don't fret over the absence of slicks, just know that the fish are there!

And finally, if you have been waiting on a great redfish bite the wait is over. They abandoned the marshes following the freeze and it has been incredibly good ever since. Now is the time to put the kids on solid redfish and lots of them!