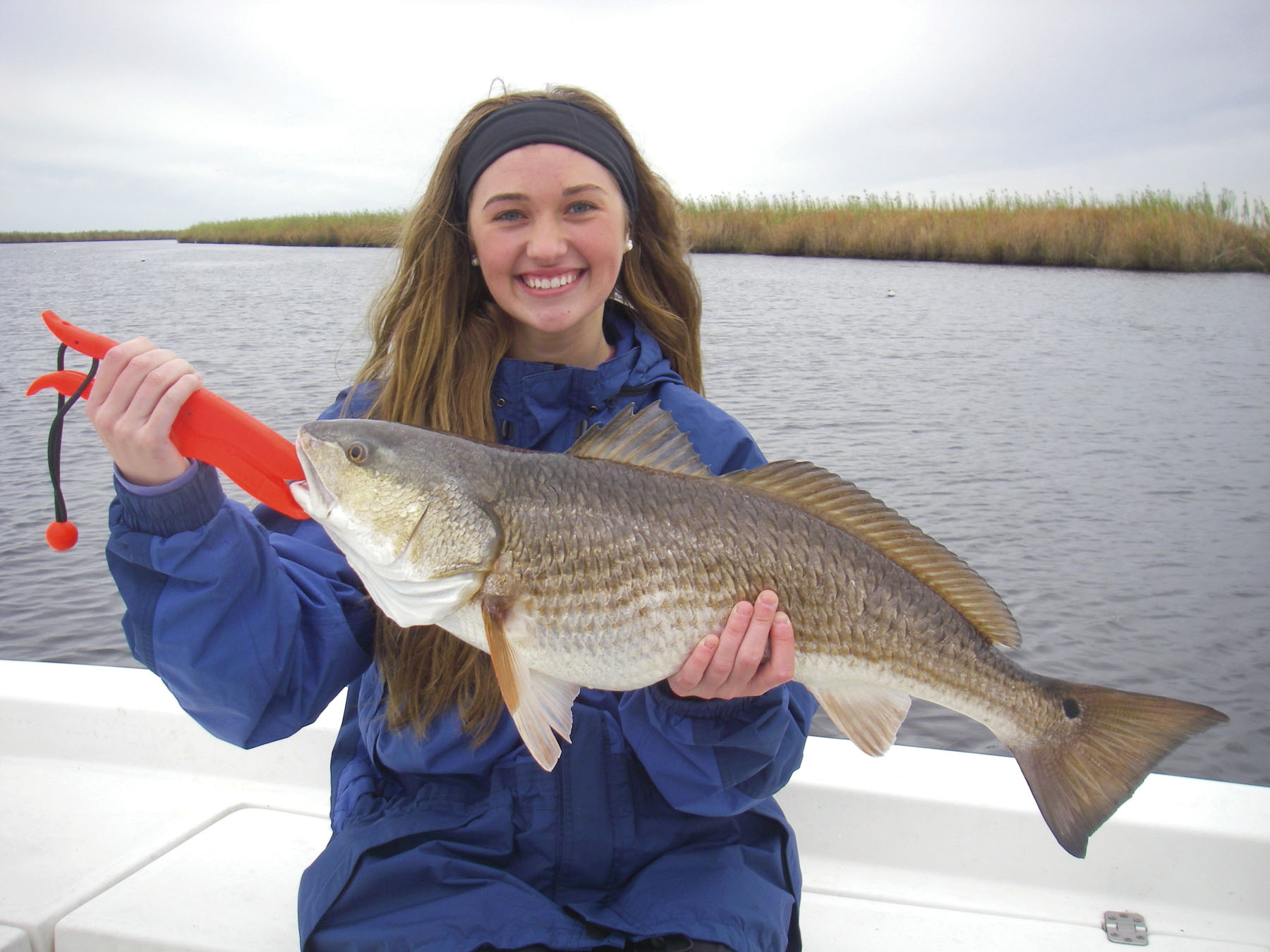 Natalie Matthews won her tug of war with this nice red! C&R
Without exception, every trout related pattern ran at least a month late in 2014 but December unexpectedly proved to be more textbook on Sabine. We welcomed strong enough north winds to purge the marshes and the bait and redfish stacked up in the nearest deep water. That bite is currently as good as it can possibly get!

Even in the worst of years past, including two record freezes and a pair of devastating hurricanes, the trout still did what they were supposed to do, pretty much on schedule. Last year though, the trout that typically hold up in Coffee Ground Cove four to six weeks prior to piling up on the shallow flats in early spring arrived in December, and were still there in March. From that point on, every single pattern ran a month or two late and we basically did a very poor job of adjusting our tactics.

We are already finding a few big trout where they are supposed to be, but there is no guarantee that the weather will not once again alter time-tested game plans. We have to live through the whims of Mother Nature, but we can and will do a better job of safely dealing with the wind this year. We conceded a staggering number of days to a white-capping lake in 2014!

The easiest solution to countering white-caps, provided the trout elect to hold on the shallow flats, is to spend more time in waders than casting from the deck of the boat. Boat control is a nightmare at best when surfing a flat, slowed only by a pair of drift socks. Removing the boat from the equation enables you to better pick semi-protected areas apart, even in the wind.

As of this writing, we are still wearing the redfish out on everything from swimbaits to live shad. Outgoing tides only escalate the action as the most dependable areas are the mouths of drains or the points of bayous emptying into the lake and river. The gull activity is slowing down, but when you find them in the open lake they, too, are usually working over redfish.

As far as I am concerned there is no "best" bait or color for catching these powerful bullies. It is simply a matter of getting it front of them. They cannot resist anything in the GULP line-up and a Usual Suspect or four inch Sea Shad doctored with a little dab of Pro Cure will keep your drag screaming.

What has been an excellent flounder run is slowly drawing to a close but we are still catching random flatfish to five pounds while targeting reds The most reliable flounder bite took place in the shadows of the Chenier LNG terminal below the Causeway, but Keith Lake and the lower ship channel held their own. As usual, GULP shrimp and swimming mullets did the most damage, but twin-tail grubs sweetened with a piece of shrimp finished a close second.

Tomorrow morning, it is all but a sure bet that we will quickly limit on reds before spending the remainder of the day probing eight to fifteen foot breaks for our better trout. The water is in great shape and while we haven't been catching big numbers exploiting this bite as of yet, we have been catching enough big trout to declare that bite pretty much on schedule.

Depending on strength of tide, a Die Dapper or Tidal Surge split tail mullet rigged on a quarter to half ounce jig head are great tools for locating these fish. Once I find them I will also offer them a Corky Devil or Maniac Mullet as they invariably entice the best of these trout. This bite is all about vertically jigging rather than casting regardless of your choice of baits!

If the trout indeed return to a more normal schedule this year, by the time you read this we will be wading and drifting the shallow flats bordering the Intracoastal and the Louisiana shoreline. The bottom isn't nearly as forgiving on the east side but that mud and scattered shell is a trout magnet on a warm afternoon.

Corkys, especially day glow and pink, MirrOdine XLs, and five inch tails rigged on 1/16 ounce heads will keep you in the hunt. Even on the coldest of days, do not be afraid to offer them a topwater. Per Mike McBride, I am now convinced single hooks work as well as trebles on Spooks and She Dogs and feel much safer unhooking a powerful fish with numb fingers.

Bundle the kids up and take them fishing this weekend!