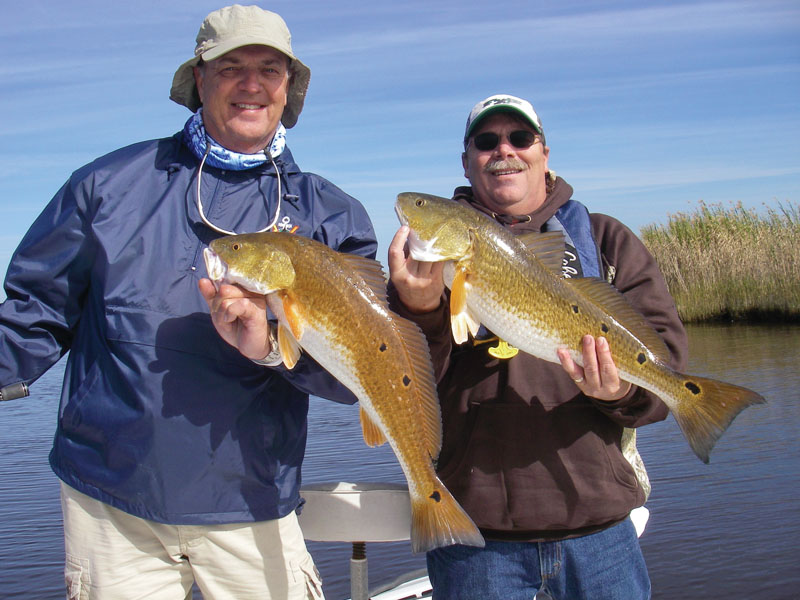 Slot reds will put a smile on your face!

I hate even entertaining the thought that the excessive flooding that we struggled through in 2015 might be the "new normal" for Sabine Lake fishermen, but little has changed thus far. Not a single day over the past year did we see the shallow marsh flats bordering the east side of the lake reduced to mud and not only are they still flooded, but more rain and runoff is on the way.

While we usually worry about getting the boat back on the trailer due to low water this time of the year, more days than not, we are now returning to the launch to find the dock underwater!

Thus far, the best news is that while the fish have been far more scattered, we are still catching some very nice trout and the redfish are absolutely everywhere. Even with the persistent run off, unlike last spring, the salinity levels are apparently sufficient even on the north end of the lake. The coveted deep water bite in both the ICW and Sabine River has been washed out, but very few fishermen take advantage of that bite anyway.

Unlike the venues that I have waded on the lower coast, covering a lot of water is seldom if ever a part of the game plan on Sabine Lake. With the exception of some very limited stretches of a harder sand and clay mix, knee deep mud necessitates staking out a claim and waiting for the trout to come to you. Three to five foot flats with isolated shell or submerged root balls get the most attention and the closer to deeper water the better.

Hopefully, it will change by the time you read this, but because of the high water some of the most productive shell is one more long cast out of reach for a wader. For that reason alone, many of our most persistent big trout enthusiasts have been drifting and Power-Poling down when they locate the fish.

The one thing that has not changed is the choice of lures. We are still taking advantage of warmer than usual surface temperatures with topwaters, but mullet imitations like the Corky Fat Boy, Soft-dine XL and Maniac Mullet still rule the roost. Day glow, pink and green-black back have been very reliable colors as the water clarity is better than you would expect.

In the event, however, that you rank among those that still have not developed any confidence in the soft plastic mullet imitations, you are still in the game serving up a Catch 2000, Catch 5 or MirrOdine XL in the same color patterns. When drifting the flats, we also do a lot of our hunting with five-inch tails rigged on a sixteenth ounce head.

I have fallen in love with Assassin's Swim Hook as it converts any plastic with a paddle tail into a legitimate swimbait and it is weedless to boot. The five-inch Die Dapper presents a larger profile and works especially well in this application. When added vibration is not a game changer, we are also getting it done with straight tail plastics like the five-inch Assassin and Tidal Surge's Split Tail Mullet.

Chicken on a chain, morning glory, red shad and glow chartreuse will get the nod most days. Even when fishing the sleeker rat-tail baits we are scoring better with the lighter sixteenth ounce head. And, regardless of how cold it gets, we can still locate trout with a GULP jerk shad or any one of those same tails fished under a cork.

There is currently no need to specifically target the redfish as they will find you when fishing any of these lures. The majority of these copper-hued bullies are upper-slot fish and, when they move in the trout catching is over until they are done with you. It's a good problem to have, until your arms wear out!

While it has been just a notch above OK at times, we are yet to enjoy the annual user-friendly flounder migration. Even the armada fishing the Cheniere LNG Terminal and the Dick Dowling Park bulkhead have to work a little harder for their fish most days.

I cannot recall who was president was when I was four years old but, I'll never forget the man that took me fishing for the first time!