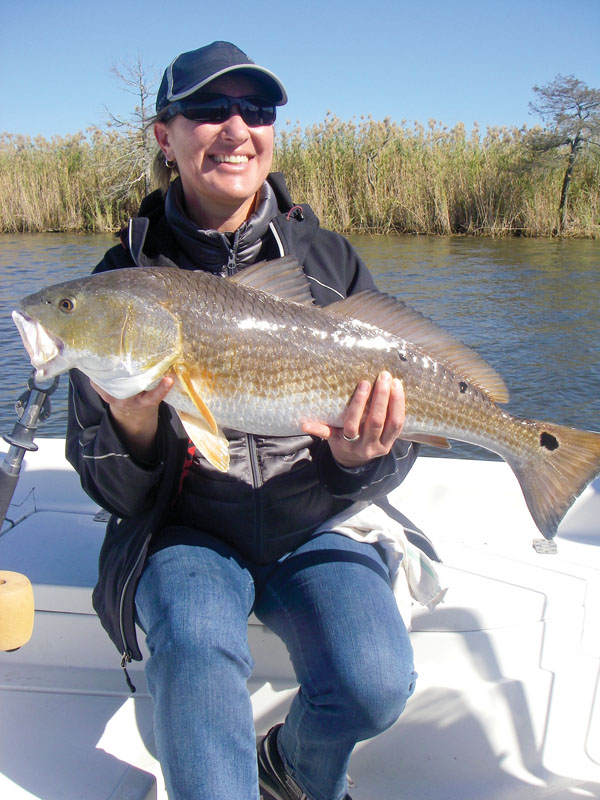 The current water conditions could not be much better, but catching quality trout could not be much tougher. After enduring non-stop rain most of 2015, we finally caught a break in mid-December that lasted through February of 2016.Traditional patterns once again worked well enough and we started to see the return of some six- to eight-pound trout.

Then came the epic Toledo Bend release that flooded everything along the river south of the dam and combined with even more local rain, the trout bite was virtually washed out. From a guiding standpoint, many weathered the worst by joining the daily crowds in Lighthouse Cove south of the Causeway competing for small trout and slot reds. To say the least, the Louisiana launch was far more crowded than the Texas launch every day.

Thus far, after only a handful of modest fronts and unusually high tides, the water in the marshes is still high and full of shrimp and the fish are keeping them company. This is typically the time of year when even the weekend warrior has grown tired of chasing flock after flock of gulls feeding over keeper trout, but that has not been the case to date. That bite is strictly dependent on the shrimp and they have no reason to exit the marshes...

None of this, however, totally explains the absence of big trout. This is normally the time of the year to get it done on Sabine, but a picture of a seven-pound trout now goes viral on Facebook. A number of disappointed croaker fishermen were the first to report fewer big trout this past summer.

Most of my clients have no desire to target big trout only, but they still catch their fair share because we drift water that produces those kinds of fish. Most of my time spent wading is done when scouting alone or with patient friends and that is when I have caught the majority of my big fish. In the past two years, however, my "7-pound and over" scorecard reads 11, 6 and 0 thus far in 2016!

My fishing skills have undoubtedly diminished, but hours logged on the lake alone should produce more big fish than that. The reliable jigging bite in deep water in the river that has produced not only huge numbers of solid keepers, but many trout over seven pounds as well, has been nonexistent.

So, here we are–Corky Fat Boy in hand and no immediate solution in sight. The saving grace is that we can still catch some of the best flounder that we have caught in years and, if you are in the right place at the right time, you can catch reds until you grow tired of casting.

When you find the redfish schooling, there is virtually nothing in your box they will not hit. For that reason alone, I would tie on something that I can easily cast a long way. Staying out of the middle of the school is the key to catching more than one fish.

Right now, I much prefer to work the shoreline with a 3-inch Usual Suspect or Gulp Swimming Mullet rigged on a one-eighth ounce head. Those two baits will not only dupe big flounder, but redfish and an occasional trout as well. More often than not, you will see the reds idling along the shoreline in small groups. Egrets and herons hop-scurrying along the water's edge are usually riding herd on redfish as well.

While it currently seems to be little more than wishful thinking, I hope that by the time you read this, folks are once again bragging about the improved trout bite on Sabine Lake. I would like to be the one that first figures out the big trout, but I would be equally happy with consistent limits of 16 to 20 inch fish. While our larger trout may or may not join the party, I really expect the "numbers" bite to improve as soon as Mother Nature forces the shrimp out of the marshes.

Before you swear off Sabine Lake based on one less-than-encouraging report, remember that someone catches fish somewhere on the lake almost every day. I will continue to leave the house every morning with a five-inch Assassin, Usual Suspect and a Fat Boy tied on, intent on being one of them!

Breaking news: Seniors appreciate an invitation to go fishing as much as the kids!