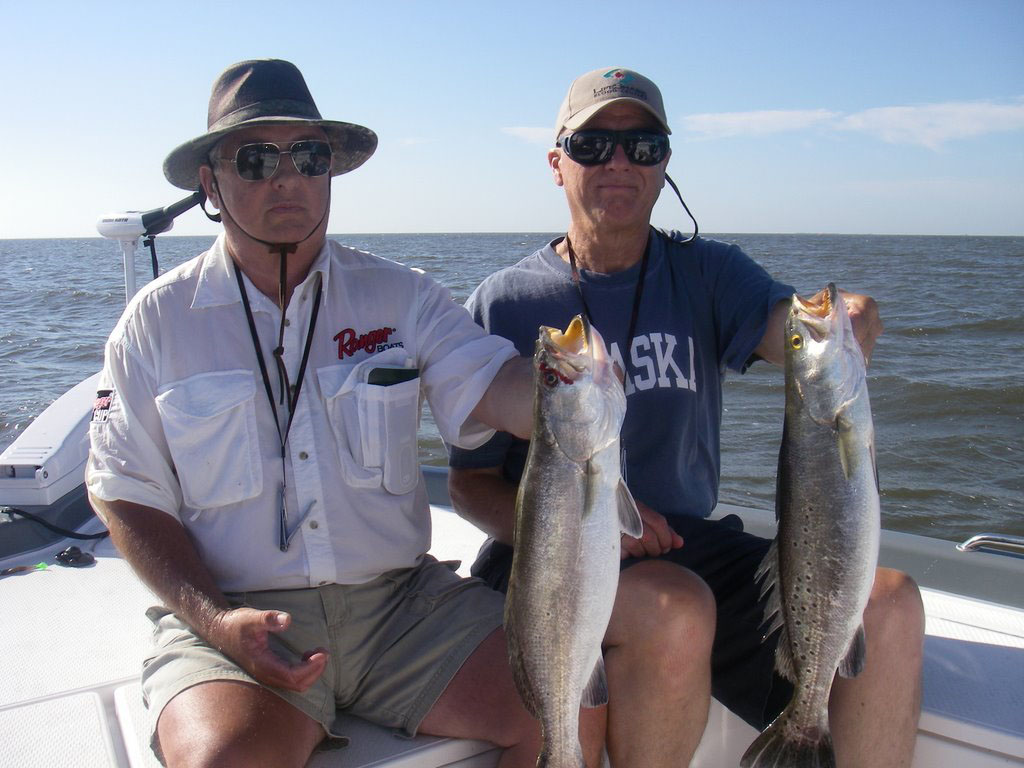 Two nice trout that could not resist Texas Roach Assassins.
Mother Nature took a breather the last week of May and the fish responded in kind on Sabine Lake. We have had to continue to deal with more wind than we are used to fishing, but the water clarity is great and the salinity level is good all the way to the Sabine River.

Oberto's Redfish Cup returned to Sabine the beginning of June and quickly tamed the redfish population. Unlike last year, the top five qualifiers caught their winning fish by staying close and fishing between the jetties and the Louisiana marsh. They not only posted some phenomenal numbers, but once again left local anglers with new techniques for catching resident redfish as well.

The upcoming month may very well be one of the most productive months we have seen in years on Sabine if we can avoid any serious storms. Much of the lake went untapped for four months due to the incredible wind and soaring gas prices continue to minimize the fishing pressure.

Not that the schooling action under the birds has not been very good at times and will get even better this month, but we have made a living concentrating our efforts in three to five feet of water on both the north and south end of the lake. The larger trout have been hanging around the shallow shell from Garrison's Ridge to Blue Buck Point, but it is a slightly different program on the north end and along the Louisiana shoreline flats.

The first hour of the day, a She Dog or Skitterwalk in a bone or pearl-chartreuse pattern fished tight to the shoreline may well produce a trout large enough to get you on the S.T.A.R. leader board. Look for large pods of nervous shad and make long casts.

When that bite slows, do not abandon that area or any productive stretch of shoreline. The next move is to simply back out into a little deeper water and fish the top column of water with a suspending lure like the Catch 2000, a MirrOdine, or an Assassin Texas Shad. The hard baits in pearl chartreuse and chrome green back have been very good in the clearer water.

We also do well this time of the year swimming both the Assassin Sea Shad and longer eel on sixteenth ounce heads or working them on an 18 to 24-inch leader under a Kwik Cork or Paradise Popper. Red Shad, Texas Roach, and glow chartreuse are all colors that are hard to beat on a daily basis.

A lure that has been very productive on both trout and redfish thus far has been the swim bait. Sabine Lake anglers are notorious for spending an entire day, regardless of conditions, fishing a Hoginar or Rat-L-Trap and this soft plastic addition mimics both of them.

We have done very well with both the Tsunami version and Storm's Wildeye Shad, but I prefer the 4-inch Shiner Assassin as it seems to produce a little more vibration. I carry a tube of instant glue for on the spot repairs when fishing these lures. They will all tear up in a hurry, but that is not a bad thing if a fish is responsible for inflicting the damage!

Our most productive colors in the swim bait are black shad and pearl chartreuse. They are most effective on a steady slow retrieve that is just fast enough to keep the tail vibrating, but I have also had clients do well fishing them under a cork. For some reason, we do not do as well with the swim bait around the jetties or revetment walls as we do with a Trap or diving crankbait.

If you can stand the heat on those breathless humid days, this month will yield some of the most incredible schooling activity in the mid-lake area that you have ever experienced. Surface feeding redfish are easily the top attraction, but we have caught trout up to nine-pounds chasing ribbonfish in the middle of the day.

The keys to locating these bonus fish are reading the birds and scanning the surface rather than the sky. Never pass up small loose groups of birds that appear to be resting on the water. More often than not, they are riding a school of fish waiting on them to drive the bait to the surface.

Secondly, when the birds are not working, keep both your eyes and ears open. Sometimes you will hear the fish striking, but more often than not, you will see the shrimp or ribbon fish skipping across the surface. Because there are often no birds around, you may well have this one school of fish all to yourself for an hour or more at times.

Last, but not least, this can be an incredibly good month on both the jetties and at the short rigs. Arriving early, even well before sunrise, is a good idea this time of the year. Quick limits of solid trout and redfish that threaten to spool your favorite baitcaster are the norm over the next two months. It is not unusual to be done by mid-morning!

The Redfish Cup Tournament anglers introduced two new techniques for catching big reds off the deep granite that could salvage a tough day. They relied on deep diving crankbaits and Carolina rigged plastics to probe the deeper rocks and hammered the redfish in less than perfect conditions.

Remember to be especially careful with the fish that you catch and release as both heat and handling them reduces their chances of survival!