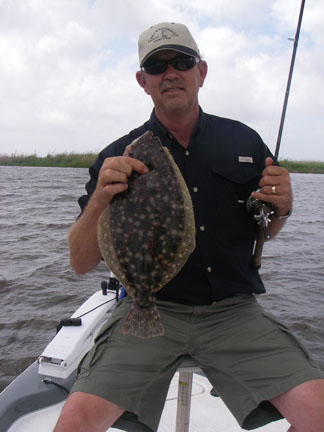 Not including trips to Calcasieu or trailering down to the south end of Sabine, I wind my way through Orange in the pre-dawn darkness, boat in tow, some 200 to 250 days in a good year.

Oblivious to promising weather reports, I always check the plastic flags at the car lot halfway through town. Five blocks closer to the launch, I glance at the flag atop the courthouse. Following an unseasonable cold front, they finally hung limp the last Friday in May and the bite has been on ever since.

Blessed to have the bayous and river to fall back on, I weathered two windblown months by capitalizing on pretty good redfish action and an incredible flounder bite. It was so good; in fact, that we were reluctant to take advantage of an excellent big trout bite.

The future of the flounder has finally drawn some serious attention, but according to my logs, it has been 16 years since we last experienced such a positive keeper to throwback ratio. We have not caught the numbers of flatfish that we caught back then, but we have caught only a handful of flounder under 16-inches all spring.

Actually the weekend prior to the daily gusts subsiding, the trout went on a tear and they have not slowed down. The jetties kicked out a six-fish stringer averaging five pounds per fish in a local tournament and that kind of trout has been the norm rather than the exception for the past month. Most of the females are heavy with eggs and a 25-inch fish will easily push the six-pound mark.

The closest thing to a guarantee this month will be the jetties and the short rigs. She Dogs and Skitterwalks lobbed up against the rocks at first light are deadly for bragging size trout. Later in the morning, MirrOdine XL's and 5-inch Assassins fished a little deeper extend the bite.

A large number of local anglers will abandon the rocks when the Gulf is flat and fish both live bait and plastic around the rigs. That bite can not only be fast and furious, but diverse as well.

All the way from East Pass to Blue Buck Point, the gulls will usually be working over schooling trout and reds somewhere on the lake all day long. When they are not working, you can still score well exploring the potential of fresh slicks. Anything in the box will work on these fish when they are aggressive, but you can minimize the gafftop interference by sticking with a topwater lure.

What began as a search for a more effective tool to dupe not only redfish, but big trout foraging in the submerged grass on the east side of the lake as well, has resulted in a love affair with swim baits. Two other guides that help me on a regular basis have been singing the praises of the smaller 3-inch versions for the past two years.

I initially relied on Texas rigged weightless plastics, but that all changed after threading an Assassin 4-inch Swimming Shiner on a Mustad Ultra Point 1/8-ounce weighted hook. Because it is totally weedless, it will swim though darn near anything and the trout love it.

I now have one tied on at least one rod regardless of the structure I am fishing. I throw it under the birds, fish it over shell, swim it through the granite rocks and not only catch reds and trout, but lose far fewer lures. I have also done very well fishing the weighted hook in the longer 5-inch Sea Shad. I think the thinner and softer Sea Shad not only translates to even more vibration, but results in more hook-ups as well.

Remember – one cast can earn you a lot of money in the CCA STAR tournament this summer, but only if you take the time to enter!