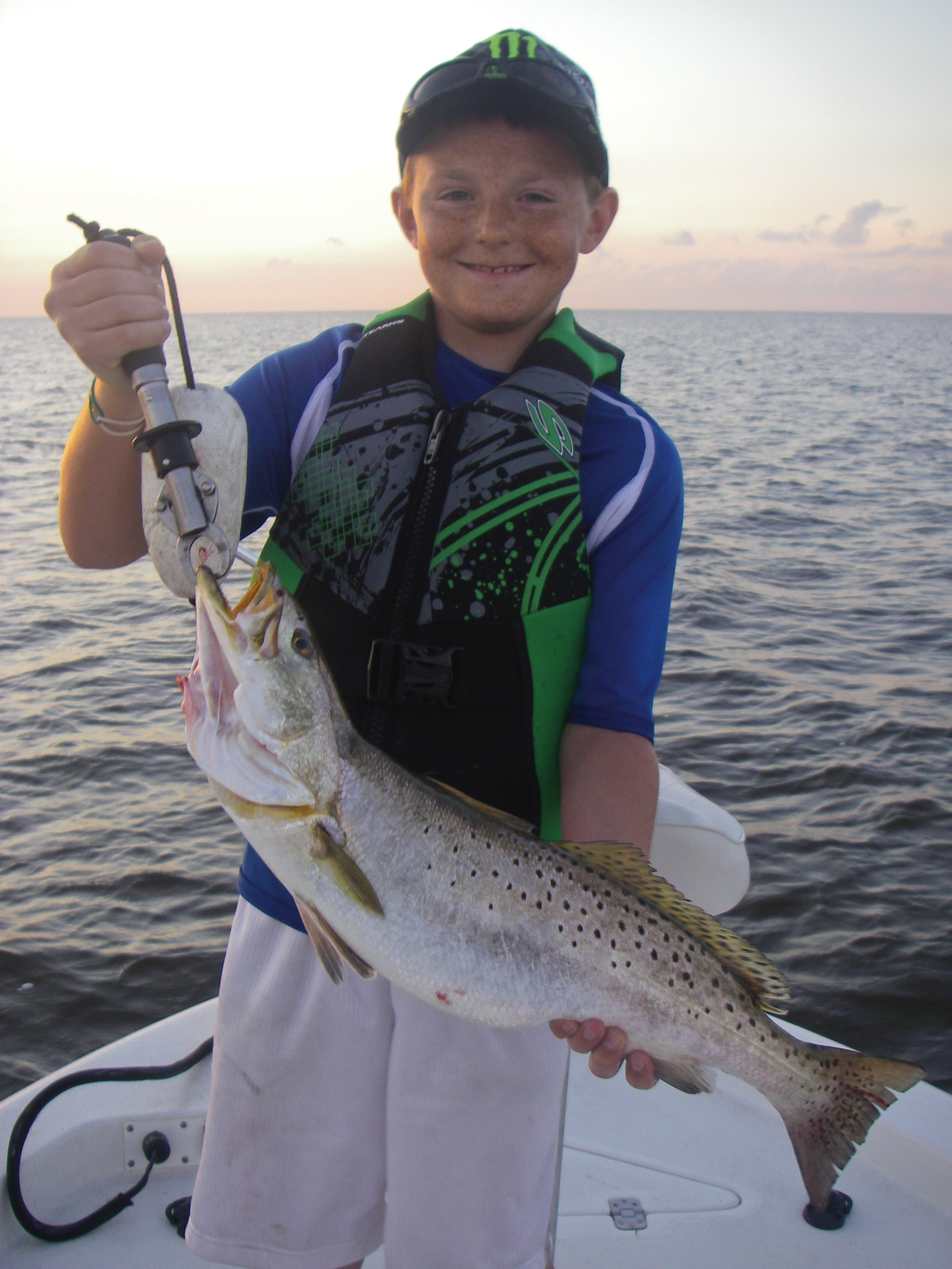 We can only hope that we have anything left to look forward to this summer that can possibly match the catching we have experienced over the past month!

The average size of the trout has just been incredible. Over a two week period, bank fishermen alone walking the north revetment wall caught four trout over 29-inches with the largest two topping the 10 pound mark. Three of those fish were caught on live shrimp fished under a popping cork while one of the 10s ate a Super Spook.

Whether at the jetties or the revetment wall 29 miles to the north, the key to earning swings at fish over six pounds has been working the rocks. Swim baits and five-inch tails like Assassin's Texas Shad or Die Dapper have accounted for an insane number of 5 to 7 pound fish, but the largest percentage of the sure enough bragging size fish have been fooled with a topwater or a crankbait.

The Heddon Swimming Image and the River 2 Sea Cranky M have been lethal for anglers working the north and south revetment walls. When the fish are holding deeper the Catch 2000 and MirrOdine XL have also been hard to beat. Color hasn't been nearly as important as determining how far off the rocks to concentrate your efforts.

Occasional slicks will help with that decision but you never know if they are going to be crushing mullet tight to the rocks or suspended away from the structure. As the water continues to warm, bouncing tails off bottom at the base of the wall will become more productive. I don't know that there is a better color for fishing this pattern in the dead of summer than opening night or violet moon.

From the Chenier LNG terminal all the way to the end of the jetties, topwater lures have dominated the scene. Spooks, She Dogs, and Skitter Walks in bone, clown or chartreuse patterns have accounted for the lion's share of the big trout on that end of the system. The redfish are prone to crash the party but for no obvious reason they have not done much thus far on the north end of the lake.

This is the month to start your wades on the flats on the north end before the sun ever crawls out of the Louisiana marsh. It usually isn't a matter of whether or not you will get bit, but only how big the fish will be. We catch some very good trout a short cast off the ICW, but even a two pound trout is initially a monster when it stomps on a topwater in the dark.

When that bite slows down you can fill the rest of the trip drifting deeper water or chasing birds working over surfacing shrimp or schools of shad. The shad are already rafting up and once they cover the surface all over the lake it will be a literal food fight at some point every day for the redfish and they will hit anything that lands in front of them.

A Hoginar can extend the bite when the schools go down. Most folks opt to cast the bladed lure and retrieve it like a Trap, but we do just as well loosening our drag and simply dropping it over the side of the boat. If you don't loosen your drag, you are either going to break a rod or get it jerked out of your hands as there isn't much stretch in eight feet of braided line!

The majority of our keeper trout and redfish caught under the gulls are taken well after the birds have abandoned the scene. Plant your Talon or drop anchor and wait it out. Invariably the fish will come right back up in the same area minus the birds. While waiting them out, we switch to 4-inch Sea Shads or Flats Minnows rigged under a Kwik Cork and call them up.

I have been blessed to fish with a lot of 7 to 12 year old youngsters recently and there is nothing they enjoy more than chasing the birds or casting the Kwik cork rig to fish slurping shrimp off the surface. It is even more enjoyable when they are armed with a balanced spinning combination.

I absolutely love my Laguna casting rods, but I haven't found a better spinning rod for fishing the Kwik Cork set up than Titeline's 7-foot medium action stick. I match it with a Shimano Sahara 2500 filled with 20lb braid and while it is rigged to suit my needs, I have never had a youngster that couldn't cast it following ten minutes or less of practice. Even the smallest hands have no problem tripping the bail on that size reel and the drag system will adequately handle anything I hope to catch.

Take the kids fishing and someday in the not too distant future …they'll take you!