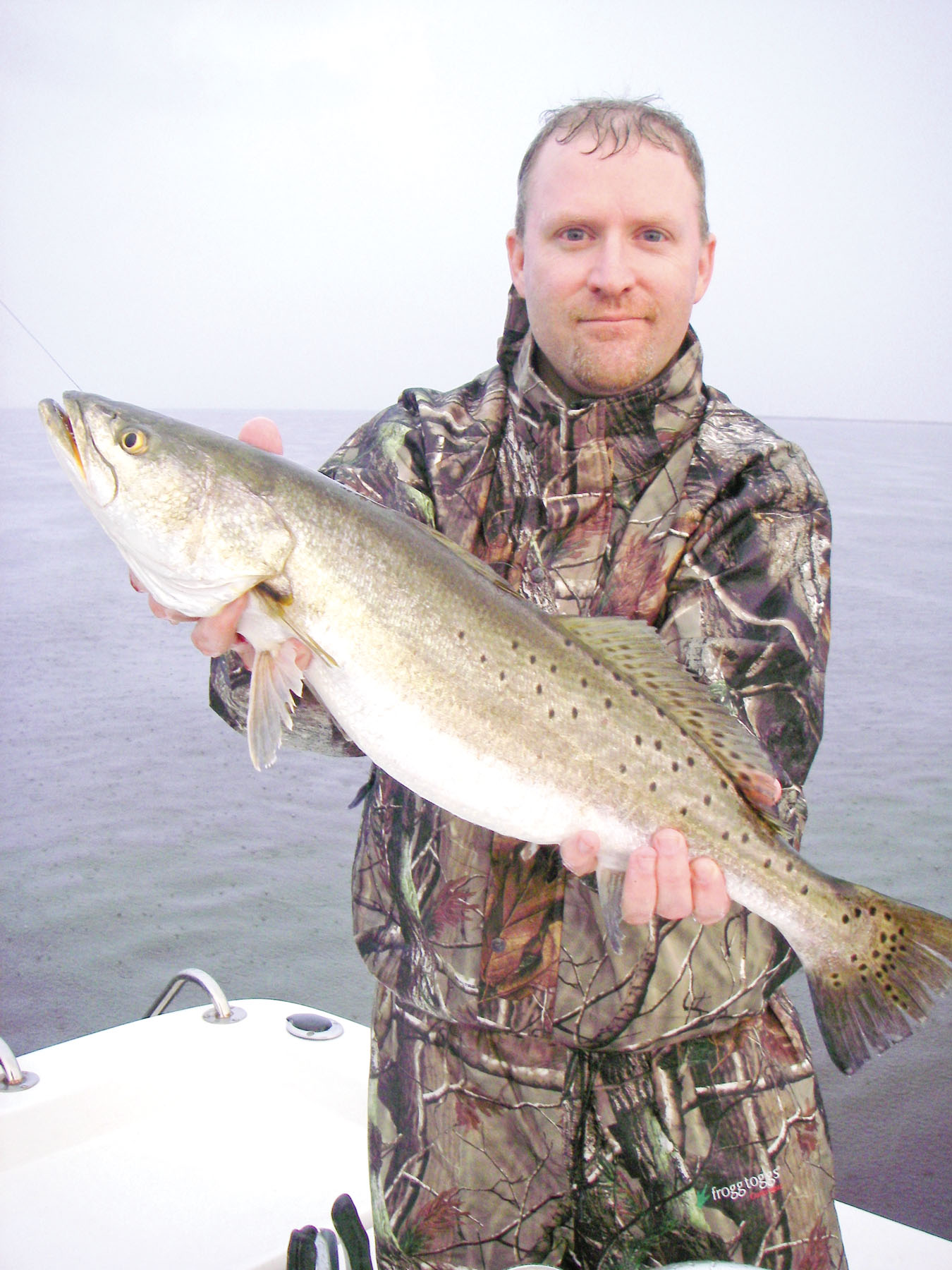 The rain didn't slow the trout bite. C & R
It started with eight inches of rain. The flats bordering the ICW were immediately flushed with freshwater and clarity took a temporary hit. Much to the delight of the folks that had been cashing in on the phenomenal big trout bite, however, the bite rebounded quickly and we thought we were home free.

Two days later Mother Nature decided that four months of howling wind weren't enough and she vented for nearly the entire month of May. Many of the most productive flats were blown out daily and the more determined fishermen were forced into overcrowded patches of semi-protected water on the Louisiana side.

There has been, however, sneak peeks at a potentially great summer as every time the wind has backed off to a manageable level someone catches another big trout and the birds work a little. It took an eight pound-plus trout to win the annual S.A.L.T. Club Memorial Day tournament and they fought wind all weekend. The day before STAR kicked off a 9.4 pound trout made the local scales!

At this point I can only assume the wind will eventually give us a break and the playing field will expand soon. If and when that happens, the gull activity will attract the largest crowds, but that is not the way to catch the largest of our trout in July and August.

Depending how deep the trout set up shop, plan on wading early and drifting the deeper flats during the hotter hours of the day. I don't know that I have ever fished a Corky Fat Boy or Maniac Mullet this late in the year, but the big trout are going to have to quit eating them before I put them away.

We will start virtually every morning with a She Dog or Spook and let the fish dictate which topwater they prefer. Black-chartreuse and clown are very dependable. When they blow up but don't eat, offer the same fish a Die Dapper on a 1/8 ounce Shiney Hiney head. You will probably have to dig that combination out of the back of their mouth!

When the fish slide off into deeper water the same lures are still in play but we seem to find more fish with the longer rat-tailed Assassin or a swimbait. Unlike the spring and early fall, I do much better with the slightly larger four inch H & H Usual Suspect for both trout and redfish. Space guppy, glow-chartreuse and opening night have been exceptionally hot depending water clarity.

This will mark our first summer fishing with the Vudu shrimp under a cork and while it has already proven itself, it is going to be devastating on trout schooling under the gulls. Perhaps its most important attribute is its toughness as no one likes replacing plastics when the trout are doing their thing!

Due mostly to the exceptionally high water, the best redfish action is still in the backwater marsh on the Louisiana side and along the jetties. Look for the huge schools of summer to start prowling the open lake as soon as the shad exit the bayous.

The flounder catching has been above average and part of the reason is that many frustrated trout fishermen have targeted them as an alternative to dealing with the chopped up open lake. The size of the flounder has been the calling card and the numbers aren't bad either.

GULP in any shape or form will work, but we have done well enough fishing four inch Sea Shads and Flats Minnows on 1/4 ounce heads. We have also done well on both flounder and redfish with a 3.5 inch Wedgetail rigged on a 1/4 ounce single blade spinner bait.

If you have your La. license I would recommend the bayous leading into the Game Reserve for the most consistent bite, but you can also do well on main points and the small drains. When the tide is in look for the fish to hold tight to the cane roots and when it is out, look for them 15 to 20 feet in front.

Until recently, I had only fished Laguna's custom rods, but they came out with a Liquid Series rod this year for about half the price and aside from not being quite as pretty or personal, I can't tell enough difference to merit the extra money. The actions are the same as the customs with no sacrifice in weight and balance, and we haven't broken the first rod thus far.

Sign the kids up for STAR and any cast on every trip has the potential to earn you a pile of college money!