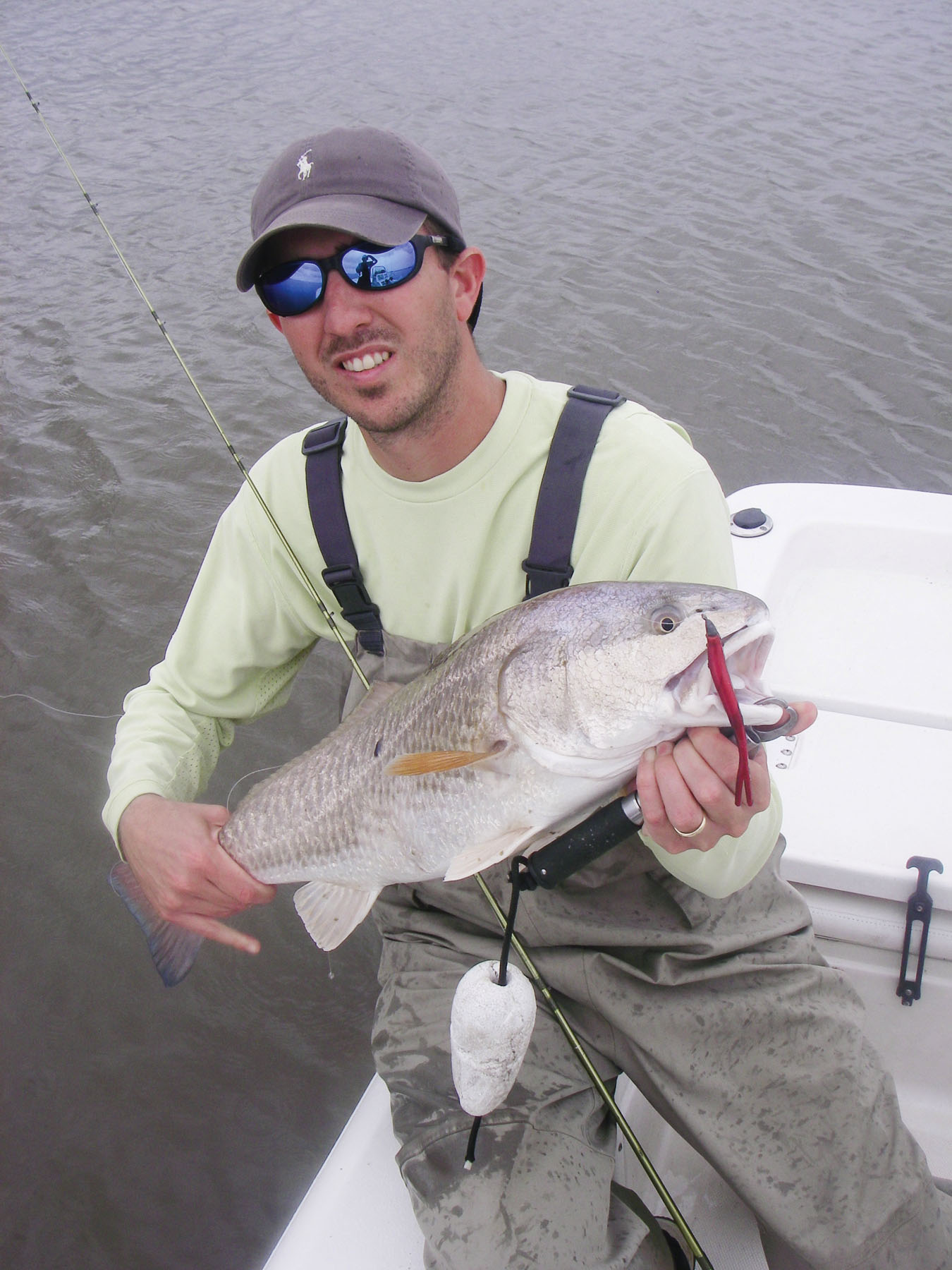 Rusty's big red was released to fight again.
While the lower coast continues to deal with the negative effects of too little rain the catching on Sabine Lake has been stymied by more than enough of the wet stuff. I feel certain that the lower coast fishermen would quickly point out that too much is much better than too little, but the excessive runoff has altered our bite lately.

The dependable Plan B Program, "scraping the wall" or vertical jigging the deep breaks on the river, has been virtually washed out. Heavy rain north of Toledo Bend means a lot of water flowing southward to maintain lake levels. It is raining sheets right now on what is forecasted to be the fourth of five consecutive days of local thunderstorms and the SRA is currently running two generators fifteen hours a day.

The wind has been a little more user-friendly of late thus enabling us to access most of the lake. In past years, excessive amounts of fresh water concentrated the trout on the Causeway reefs on the south end, but that bite has thus far failed to materialize. We have found redfish feeding on the surface in small schools on occasion, but drifting the shell for trout with plastics has not been worth the extra gas.

The ship channel south of the Causeway has been red hot on clearing-incoming tides lately for trout and reds, but I don't spend much time fishing that area. As the clearer and saltier Gulf water funnels its way into the lake the trout bite on the reefs will immediately improve.

Easily, the most promising indicator of a very productive summer is the incredible amount of small shad roaming the open lake right now. Prior to the last week of May, virtually every trout, red and flounder we caught were gorging on these shad as they exited the bayous and took refuge in the shadows of the Roseau cane. As they mature they move into the open water and it is "game on" for the fish, gulls and anglers!

A growing number of dedicated anglers focus solely on big trout, especially with the S.T.A.R. tournament in full swing, but far more fishing folks simply enjoying "catching" and let the rest take care of itself. This is not to say that you can't dupe a big trout working these mobile buffets, but more importantly, they are the equalizer for the fisherman that has no time to scout.

Even if you don't see fish striking the surface it still pays to cast in and around these pods of shad with everything from a She Dog or Spook Jr. to a 4-inch Sea Shad or Usual Suspect swimbait. For my money, provided the gafftop will leave it alone, there is no better weapon for ferreting out and exploiting this bite than a Vudu or DOA shrimp fished under an H&H TKO cork.

I have found the cork set up easiest and most effectively fished with a spinning combination. I personally use a 2500 or 3000 series spinning reel and seven foot Laguna medium action rod for cork work. Twenty pound braid is the ticket to longer casts and the no-stretch factor assures better hooksets when the cork disappears.

While wading or drifting the shallow flats both early and late should be off the charts for targeting the larger trout later this month, the single biggest mistake most visiting anglers will make is looking for fish tight against the shoreline the remainder of the day!

We will catch a world of solid trout across the summer drifting parallel to the shoreline a hundred yards or more out into the lake. The bank fishermen that walk the revetment walls will quickly tell you that most of the boaters that share the same water are sitting on the fish and ineffectively casting to the rocks.

Both finger mullet and mature shad spend much of their time suspended in this corridor of water throughout the day. The best way to find them when they are not on the surface is to simply idle along and look for the flashes just beneath the surface. Sitting gulls also ride herd on these schools of trout while waiting for them to drive the bait to the surface. Never pass up sitting birds on Sabine when they are not bunched tightly!

Sign the kids up for the CCA tournament and get them on the water today!