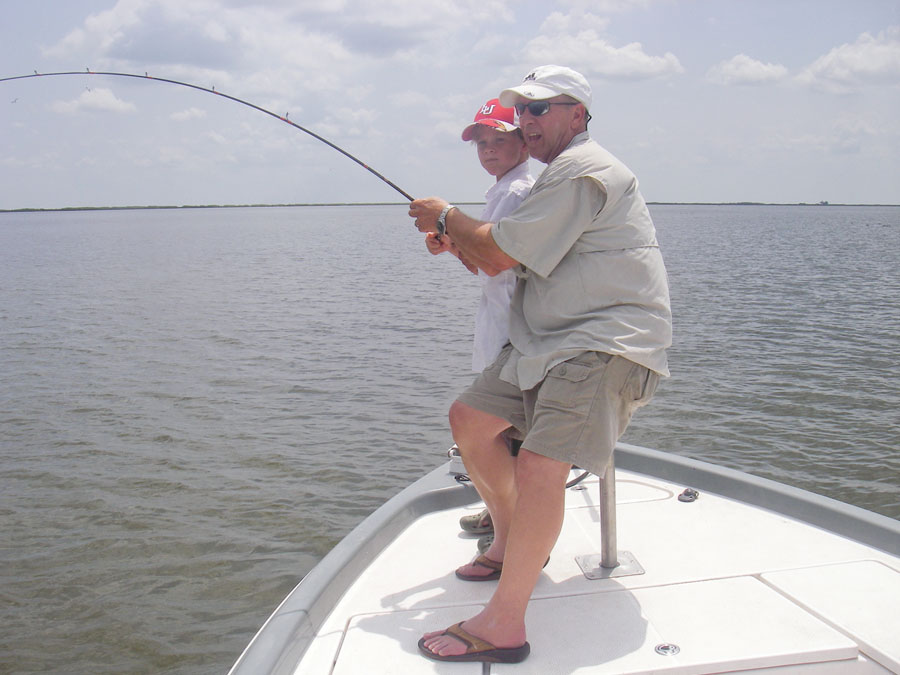 A shared moment that lasts a lifetime.
It is déjà vu all over again and I am once again reluctant to attempt to predict what to expect for the upcoming month as we are currently in uncharted water, and lots of it!

I have no idea how the weather service calculated this rainfall statistic but, it is reported that Texas received seventy-five trillion gallons in the month of May. I don't know how many zeroes it takes to even write that number, but I do know that a helluva lot of that water has found its way into Sabine Lake via the Neches and Sabine Rivers.

In addition to the water (runoff) yet to arrive from the Dallas area, we continue to absorb at least one rain event locally every day. In fact, we lost power this morning due to lightning no sooner than I turned on the computer. With both generators at T-Bend currently running 24/7 and nine gates cracked open, the SRA is doing all it can just to maintain pool level...

The amazing thing is that in spite of all of this fresh water we are still managing to catch enough trout to stay in business. The majority of the catching is still taking place from the extreme south end of the lake to the jetties and even the jetties have been iffy, due to wind and daily storms.

The north end of the lake has been next to impossible. We have caught just enough trout jigging at depths of 16- to 22 feet in the ICW to be assured they are still there and only waiting on more favorable water to move back up on the shallow flats.

As you would expect, fishing pressure on the south end has been significant and that isn't exclusively due to the fact that it is the only game in town. Daily storms and prevailing southeast that seemingly howls from daylight to dark tend to hem anglers up in the only semi-protected water available.

Based on my latest trips, I think it would be a challenge for a visiting angler to put together a successful program on Sabine on a single visit. The most obvious options would be to join the crowds drifting the breaks on the ship channel from the Chenier Plant to Lighthouse Cove, drift the deeper reefs north of the Causeway or find your own scattered shell in five to seven feet of semi-protected water.

The key to locating trout on the south end has been keeping your bait in contact with shell. We are occasionally seeing shrimp on the surface with trout in hot pursuit, but that is little more than window dressing. Slow your retrieve and hug bottom!

No doubt the water clarity is much better below that top layer of dirty water engulfing the entire lake and salinity is better down deep as well. The biggest change in tactics of late is that we have done much better crawling a tail across shell very slowly or simply shaking it in place with the rod tip. The bites can be very subtle, but that's no indicator of the size of the trout–many are in the 18 to 20 inch class.

With the exception of watermelon or avocado-red flake, the best color for us has been white or glow with a green or silver flake. We have done well with the Die Dapper in the 3.5 and 5 inch sizes as well as a Lil' John rigged on 1/8 ounce heads.

We have recently been rigging Seas Shads and Die Dappers on Assassin's new weighted swimbait hooks and it has effectively turned every paddle tail in the box into a legitimate swimbait that doesn't roll over on the retrieve. The weight on the shank is spoon shaped and hang ups are greatly minimized when the barb is "skin hooked" in the back of the bait.

You can still catch decent numbers drifting deeper shell on the Causeway reefs regardless of the crowd when you catch the tide right. The same colors are working for us, but we rely on 1/4 ounce heads to compensate for the strength of the tide. That bite could progress from decent to stupid good overnight as the water improves.

If nothing else, dealing with tough conditions has not only made us better fishermen, but even more appreciative of how incredibly good this lake is year round. Can you imagine how many trout and reds haven't even seen a lure over the past two months? It is going to be unreal!

Sign the kids up for the S.T.A.R. tournament today and fish with them all summer.