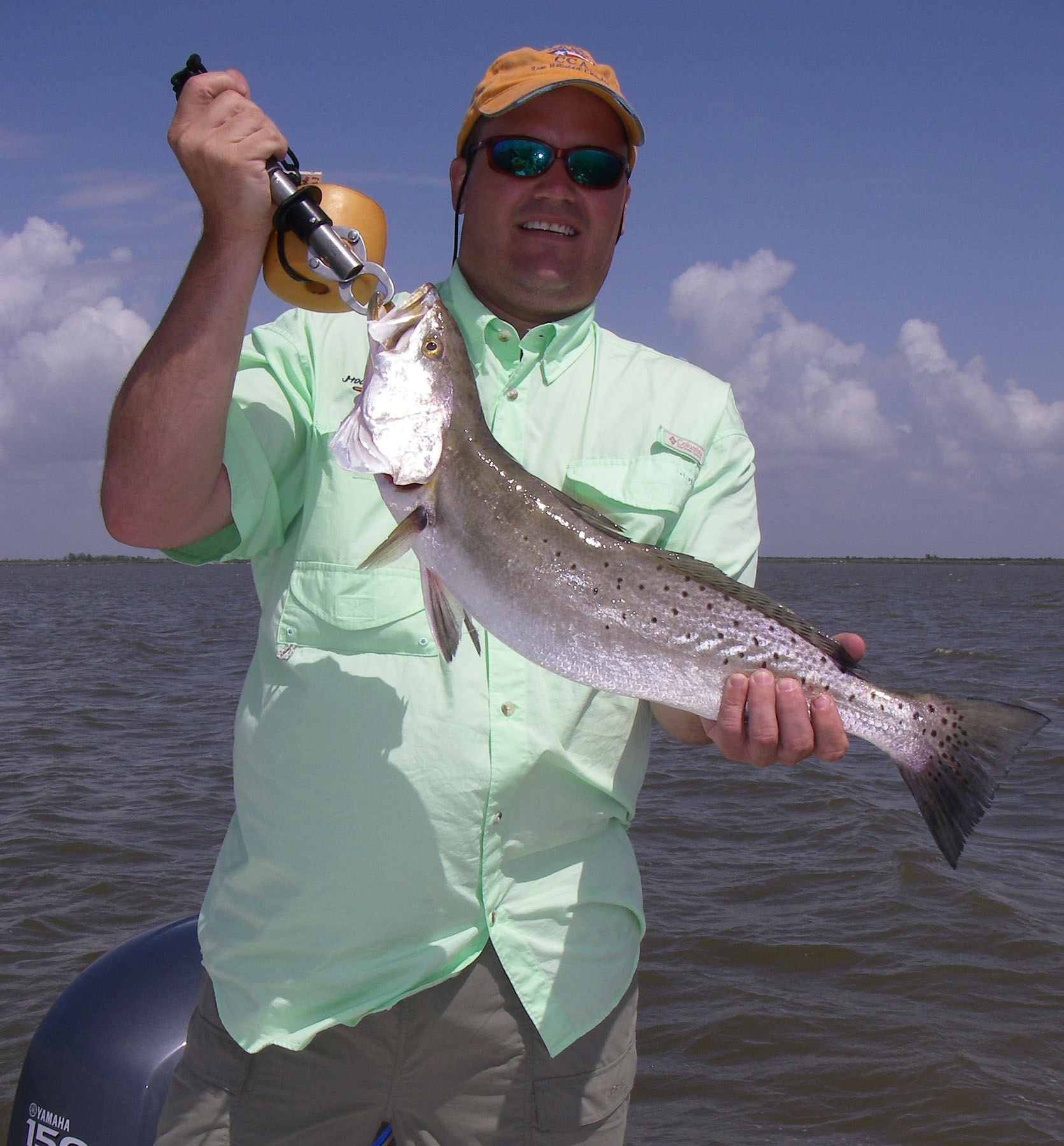 "Getting a little desperate working terns aren't we?" asked the youngest of my three clients as we eased into casting range of a handful of birds hovering just above the white caps. "Those are not terns," I replied, "those are gulls that haven't eaten in a month and a half due to gale force winds everyday!"

Unfortunately, that was not much of an exaggeration. Sabine Lake had been upside down and badly off-colored most of March and April. The trout were there and the bite was good on those rare occasions when a good tide change took place in less than twenty mile per hour winds. On the best of days, a foot of visibility was considered great water clarity, but the wind was the major culprit.

Every year I split my fishing time in the early spring between Calcasieu and Sabine for two reasons. We are usually fighting the fresh water runoff from both Rayburn and Toledo Bend on Sabine and the magnum trout are a little easier to locate on Calcasieu. We caught some big trout on Calcasieu this spring, but more importantly, there were places to hide from the wind that produced fish.

The last week of April, Mother Nature inhaled for three or four days, the water cleared up, and the "catching" absolutely exploded on Sabine. We were able to fish parts of the lake that we had only bounced across on the way to the Louisiana shoreline day after day and both the fish and the bait were there.

We can only hope that the winds will continue to subside this month allowing us to enjoy the entire lake. By the end of month, you can look for both redfish and trout corralling shad and shrimp in the middle of the lake. I know that "middle of the lake" is a little generic, but we are talking about that stretch of water between the fishing piers on the north revetment wall and Garrison's Ridge.

While they will segregate to forage as the water continues to warm, the reds and trout will hunt together through early June. If there are no gulls ratting out the schooling fish, key on rafts of shad or the occasional shrimp skipping across the surface. As a rule, we do much better on these fish by sticking around well after the surface activity ceases and the birds have left.

We invariably catch our largest trout out of these schools on topwaters like the She Dog, Skitterwalks, or Spooks, but the most reliable choice is a plastic tail rigged on a quarter ounce jig head. I prefer the smaller Assassin Sea Shad as long as the fish are chasing shrimp and juvenile shad. Bone diamond, glow-chartreuse, red shad, and morning glory are great colors, but my confidence color year-round on Sabine is pumpkin chartreuse.

The GULP shrimp and Assassin's new SLURP shrimp rigged on jig heads and fished under a clacking popping cork are equally deadly on these same fish. They are wonderful tools for hunting these fish while drifting open water. The one drawback for me is that the gafftop cannot leave either scented offering alone!

Our largest trout will fall victim to the early morning and late evening waders well into July. Over the years, the flats on the north end of the lake have been much more productive than the Louisiana shoreline as we move into summer and this year should be no different. The close proximity to the deeper and cooler waters of the Intracoastal keeps the fish in the neighborhood.

The same topwater lures as well as Catch V's, Catch 2000's, and the smaller Crazy Croaker will produce the bragging size trout. Incoming tides and active mullet in 1-3 feet of water are the keys to locating these fish. Plan on leaving the dock early as many of the largest fish are taken well before sunrise!

I appreciate Everett affording me this opportunity to provide a more extensive report on Sabine each month and hope that it will make your outings on Sabine more productive. "Catching" is the reason for getting up at 3:00 in the morning on a day off. "Releasing" is the reason you can do it again tomorrow!