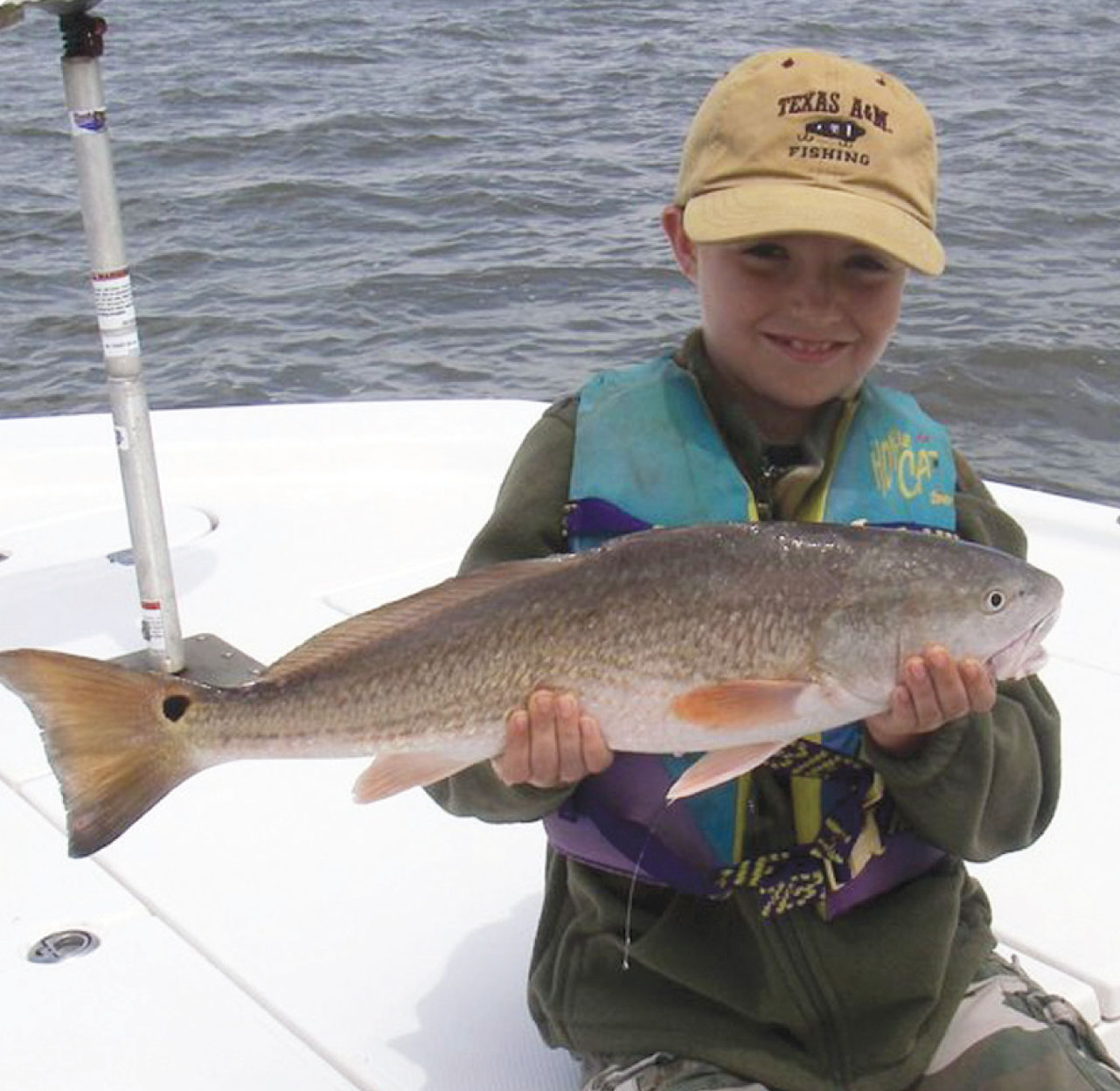 Christopher French was obviously pleased with this nice slot red.
It is especially nice to be pecking away at the keyboard while feeling like I am missing something by not being on the water. That had not been the case, but our bite drastically improved this past month and June could well be a banner-month.

The wind that was supposed to subside in April continued to howl well into the early part of May leaving Sabine Lake anglers with muddy water and very little real estate to fish on most days. Even now, if this were your first visit to Sabine, you would be less than excited about the foot or so of visibility, but it works for us.

Had generous incoming tides not cleared the water on the south end of the lake last month, I was considering a part time job upgrading the gas price placards twice a day at a local service station. Aside from cringing with every fill-up, the rising cost has chipped away at a network of dependable sources while limiting the frequency of scouting trips.

The much-anticipated good news, however, is that we have enjoyed an incredible month of both trout fishing on the south end and flounder fishing on the Louisiana side of the lake. It has been several years since we caught as many 25-inch plus trout as well as big numbers of fish in the three-pound class working the deep shell.

We managed to put only a couple of trout over eight-pounds in the boat, but I saw two over nine caught, photographed, and released. I also do not doubt the reports of two more fish over ten-pounds taken the first week of May.

Since old reports are of very little use, what can you do to cash in on the bite this month? Pray that the winds will diminish just a little, find a buddy to help share the cost of gas, and choose between specks or flounder. You are going to catch some reds either way.

The key to locating the larger trout has been concentrating your efforts on the slicks. If you fish enough to have an interest in this magazine, then you do not need me wasting space with what to look for or how to approach those coveted oily spots on the water. What has been important is keeping your lure in that top part of the water column when fishing them.

A topwater lure like the She Dog or Top Dog, Jr. may be the ticket this month, but we have done very well swimming an Assassin rigged on a one-sixteenth ounce head. We have also scored well with a Catch V or 2000 as mullet have been at the top of the menu.

Drifting the Causeway reefs should remain strong throughout the month with both redfish and jacks joining the fray. Do not forget your drift sock and jig heads in several different sizes, as tempo is the name of the game.

Soft plastics bounced over the shell will produce the most consistent bite, but keep an eye out for slicks in this area as well. There is no doubt Stake-Out Stik, keep your anchor handy, as you do not want to drift up on the fish once you find them.

Live bait, Gulp, and the curly tail grub tipped with shrimp are excellent choices, but we catch most of our larger flounder on four-inch Sea Shads rigged on quarter-ounce heads and spinner baits. We also take advantage of the scent factor by replacing the body on the spinnerbait with a Blurp Sea Shad.

I fish flounder exclusively with a 7-foot CastAway HG40 titanium rod and a spinning reel spooled with 6x20-pound Power Pro. I seldom if ever use a shock leader and I am pleased to announce that wind-knots are finally a thing of the past!

The secret was in the reel. I bought my first U.S. Reel, a 230SX, last fall and ordered another a week later. It is a phenomenal product. I also use it when fishing a Kwik Cork or Paradise Popper, as it will cast a mile. Simply eliminating wind-knots earned it a spot at the top of my list!

The most under fished area with the greatest potential this month is the open lake from Blue Buck to Coffee Ground Cove. One or two slicks or a tight group of birds is the easiest way to locate huge schools of both trout and reds, but it requires logging miles just looking on most days.

The cost of fuel might limit your hunting, but you will not burn much gas once you find them!