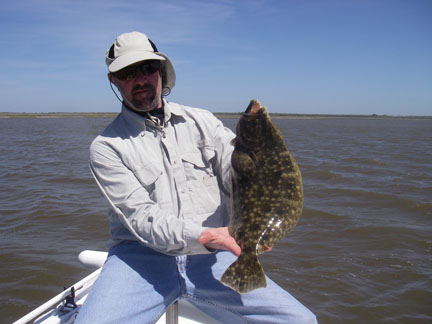 The backwater flounder bite helped salvage a very tough month!
It should come as no surprise to anyone that fishes at least two to three times a month that accurately predicting what the fish will do even one day in advance can be a challenge. You have to go to ever know for sure and there is no substitute for time spent on the water, but keeping detailed logs helps eliminate much of the guess work.

My logs from the past month, however, will be of little value as a future reference. We were blown off the water virtually every day by gale force winds that would not give it a rest even at night and then came the rains. The Neches and the Sabine rivers hovered around the flood stage mark much too long due to both local flooding and the water released from Rayburn and Toledo Bend.

While we will just have to wait and see, the good news based on the past two years is that we endured basically the same conditions only to experience incredible fishing in June. Assuming the winds will eventually subside and salinity levels will stabilize, I see no reason not to expect another great bite this month.

Slightly lower salinity levels should also limit the shark activity in the lake and that is a bonus. I have no beef with sharks until they waste a She Dog or eat the better half of a solid trout in mid-fight!

The jetties and the extreme south end of the lake will be the first areas to recover. The trout bite was nothing short of unreal down there last June. Tide is always a critical factor, but the more important decision may be whether to fish the Gulf or channel side of the granite.

Wind direction may make that decision for you, but the same lures and tactics work on either side. The most enjoyable bite involves duping both trout and redfish by working a topwater tight to the rocks at first light. When that bite slows, crawl a soft plastic tail rigged on a jig head down the wall into deeper water.

Suspending mullet imitations like the MirrOdine XL or Catch 2000 work well as do soft plastic swim baits. We have done well with Assassin's 4-inch swim bait in pearl-silk chartreuse and baby bass. The 5-inch shad is also a good choice in a variety of colors depending on water clarity, but our go-to colors have been opening night, glow-chartreuse, and Texas roach.

As the incoming tides continue to clear, the Causeway reef will attract both huge numbers of fish and anglers as well. While most of the resident anglers prefer to drift and bounce plastics over the deeper shell, the largest trout usually fall for a faster retrieve in the shallower water. Slicks are a dead giveaway, but covering territory and making long casts with tails, Traps, swim baits, and the Catch 5 can produce the trout of a lifetime.

Keep an eye out for gulls riding herd on schools of slot reds and trout between Blue Buck and Garrison's Ridge. They will test a troll motor as they can push bait in a hurry, but it is an exciting bite that can hold up all day long. If you are catching trout rather than redfish, hang around after the gulls leave and slow down your retrieve. They are still there and will be back on the surface about the time you drive out of sight.

The flats on the north end could also get hot, but conditions are going to have to improve in a hurry. We have had a good shad hatch which bodes well for that area so it could kick off overnight. If that happens, you can also score by soaking live bait on the edge of the ICW or drifting the flats with artificials. Some days we do both depending on the fish.

Hopefully, everything will come together and we will kick off another great summer of fishing. RememberIt's the thrill not the kill that keeps us coming back!