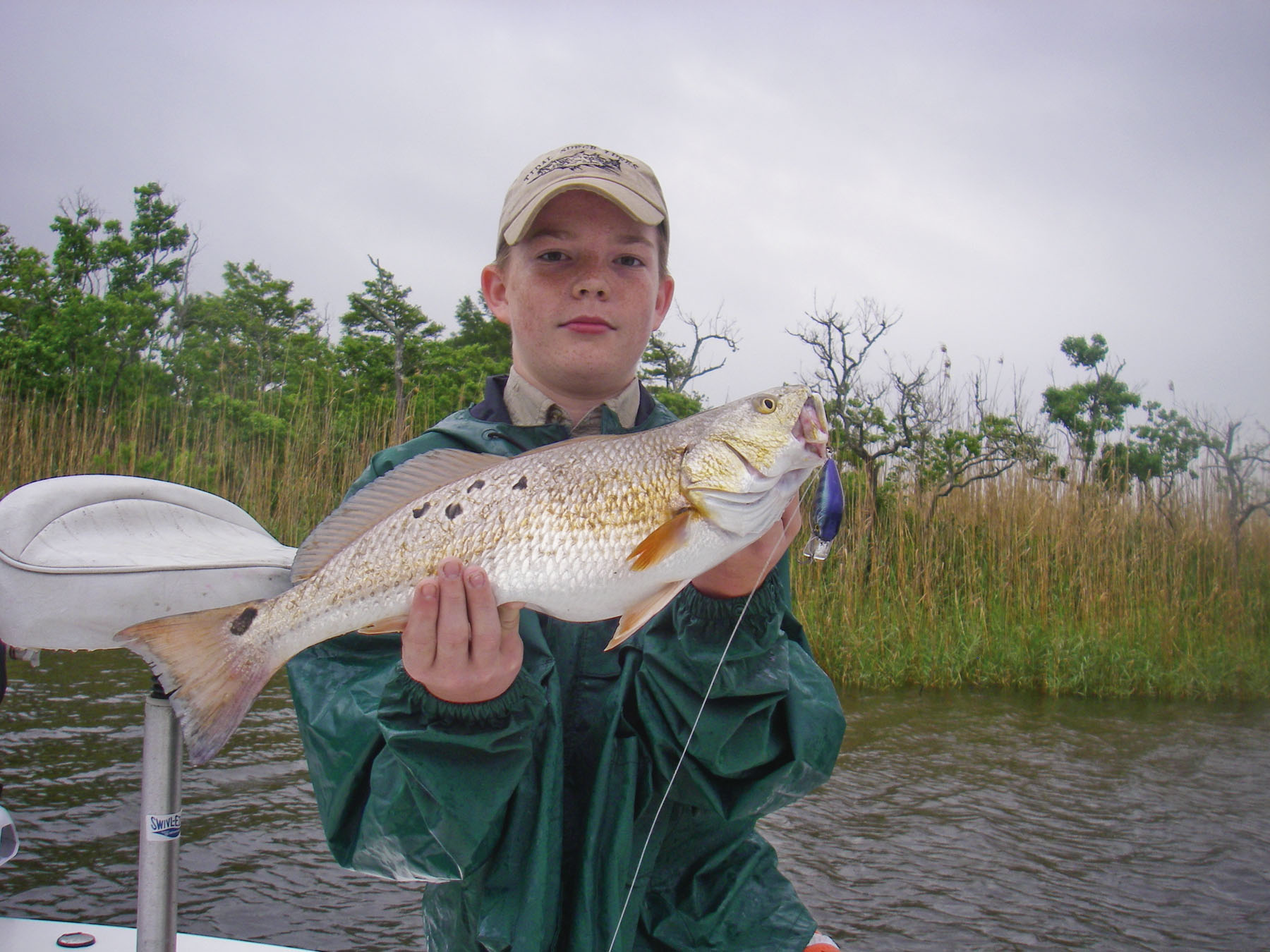 Andrew Hoyland used a crankbait to fool this slot red on the river.

The only certainties for Sabine Lake fishermen over the past month are that the wind will blow even harder than forecasted and gas will cost more than it did the day before. Mother Nature took a four day break to catch her breath in late March and again in early May and there has been Hell to pay ever since!

While the water clarity is still excellent due to the drought, daily gale force winds have all but eliminated any fishing in the open lake. The saving grace has been a better than average bite in the ship channel and the Sabine and Neches Rivers. Some bodacious incoming tides ushered in massive numbers of baitfish and that has been the key to locating trout and redfish in the deeper water.

The jetties and any semi-protected structure lining the ship channel south of the Causeway are currently serving up not only the best bite on slot redfish, but big trout as well. Tails, swimbaits, and spinnerbaits have been very good choices for exploiting the redfish bite, but the largest of the trout have fallen victim to topwaters and crankbaits.

Both rivers as far north as I-10 have been surprisingly productive for this time of the year. Drains and major cuts exiting the marshes draw most of the attention, but small points and small clam shell reefs are also holding solid concentrations of both redfish and flounder. The trout bite has not been that good in the Sabine, but we have had some pretty decent days in the Neches.

Easily the number one choice of lures for most of the river fishermen has been a single spin 1/4 ounce spinner bait. We are using a BLURP Sea Shad trailer as the scent factor helps and have also done better replacing the #3 gold Colorado blade with a #2.The smaller blade appeals to those flounder that think they are a redfish.

I have also spent more time winding on a crankbait over the past month than I have in the past ten years, but the bite has warranted the extra effort. While it all but eliminates the flounder bite, the larger redfish seem to prefer it. I basically raided my bass fishing arsenal and have done equally well with several different brands.

Color has varied as widely as the make, but a three-inch model with a square bill that dives three to five feet has been the ticket. I swap the lighter freshwater trebles with Mustad KVD elite hooks and tie the bait on with a loop knot. The smaller lures also perform much better on 10 to 12 pound mono than on braid and the mono has just enough stretch to keep you from taking the bait away from them on the hook set.

Hopefully, by the time this edition of TSFM reaches you our daily winds will be down to 15 to 20 mph and we can take advantage of a lake that has seen very little pressure. Every time we have gotten even the most modest break we have done well drifting the 3- to 5-foot flats with both topwaters and tails.

Look for the more consistent bite to be in that area from Blue Buck to the south revetment wall this month, especially on tide changes. The gulls will point the way most days, but fishing slicks and hanging around the scattered shell should keep you not only on the trout, but big schools of reds as well. A single shrimp or ribbon fish skipping across the water is all but a guarantee.

The north revetment wall and the shallow flats south of the islands are already covered up with bait. She Dogs in bone or black-chartreuse are hard to beat early and late fishing closer to the ICW or the islands. Later in the morning the better bite takes place on the deeper breaks along the ICW or a little farther out into the lake in 4 to 6 feet of water.

We will be hunting those fish on the deeper flats with a tail rigged under a Kwik Cork or swimming a five inch tail rigged on 1/8 ounce head. The rat tail versions have always worked well, but we will also be fishing the longer paddletail models like Assassin's Die Dapper or a TTF Flats Minnow XL.

Once we find those open water fish, we kick a buoy marker over the side and make several more casts rather than continuing to drift. More often than not, we discover that the fish were holding tighter than we were!