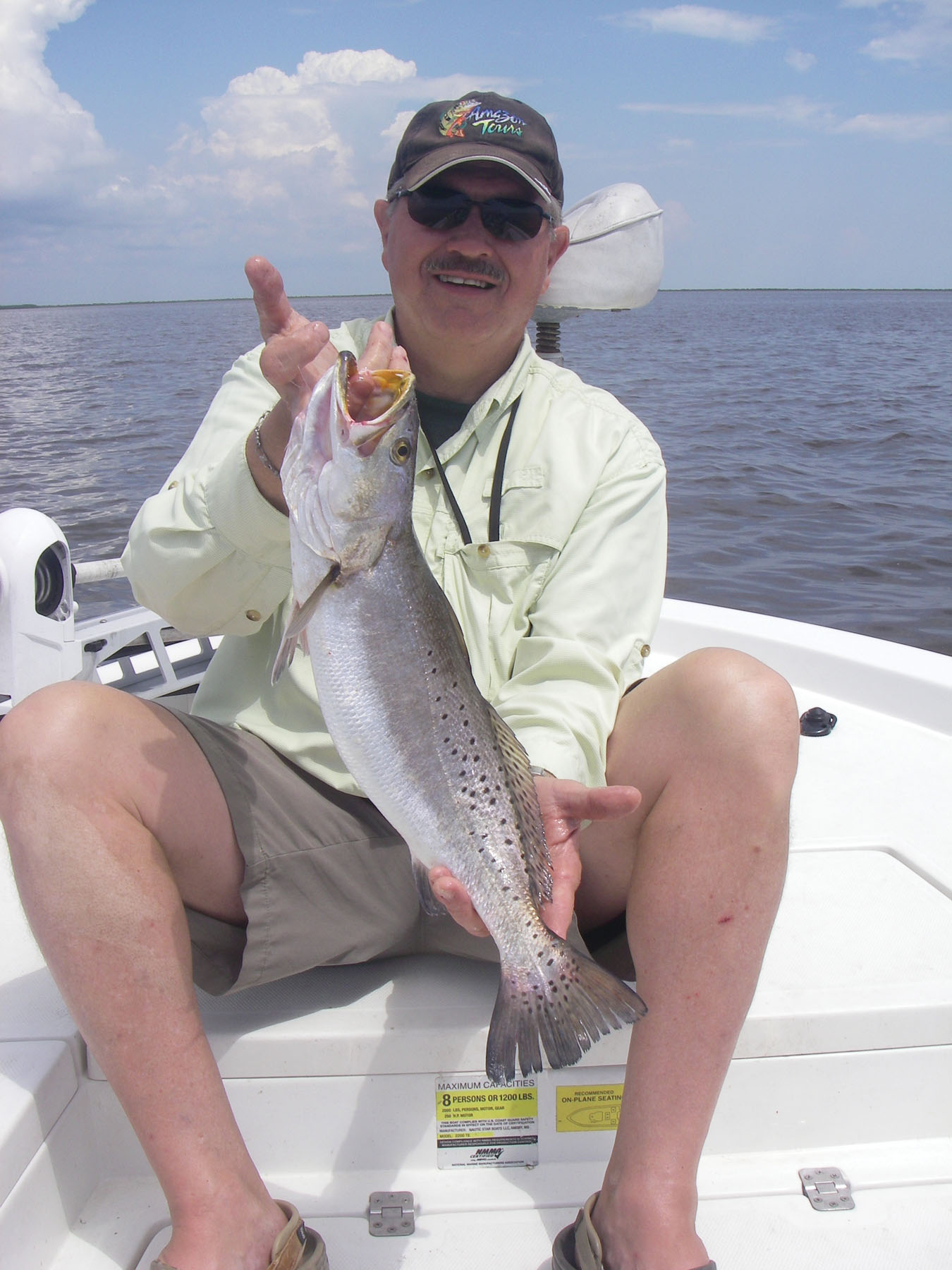 This solid trout was hustling shrimp and ribbon fish under the gulls.

Bull tides and daily winds in excess of 20 mph forced Sabine Lake anglers to go to Plan B when we should have been enjoying the best trout bite of the year this past month. Runoff, compliments of the big rains of March and April, concentrated the trout on the south end of the lake and catching involved simply being in the area on a decent tide change.

Because the badly silted water all over the lake is the product of wind rather than any runoff now, clearer water is usually only a day or two of light winds away. The wind is really the only culprit as we can catch fish in dirty water if we can just get there!

Prior to the daily poundings, we were catching not only great numbers, but big trout as well fishing She Dogs, MirrOdine XL\'s and Maniac Mullets under small flocks of gulls chasing shrimp and ribbon fish in 5 to 8 feet of water. Incoming tides brought clearer, saltier water as well as a buffet of baitfish and the bite drifting the shell is still lights out when you can get there.

That stretch of real estate extending from the Causeway to the end of the jetties will continue to be ridiculously productive over the next two months. Tails and swim baits bounced off the jetty walls and the submerged debris lining the ship channel will produce limits of trout and reds while the largest trout usually give it up to a topwater or crankbait.

The biggest decision for most regulars is whether to start on the Gulf or channel side of the jetties each morning and that is usually determined by wind direction or the number of boats that beat them there. When you catch that first fish, hold your ground rather than continuing to drift with the wind or tide as it is not unusual to limit out fishing a single spot!

While I know how user-friendly that bite can be, it is no secret that I am not a big fan of fishing the south end and occasionally struggle up north when it isn\'t necessary. That is not the case right now, however, as we have any number of dependable choices working on the north end. Wind permitting, the revetment walls, Louisiana shoreline, Neches flats and ICW will all produce good catches of both trout and reds from now through December.

Depending on the wishes of my clients, we start most mornings wading shallow flats bordering the ICW. Topwaters and 5-inch tails like the Assassin Die Dapper, TTF Trout Killer or Tidal Surge split tail mullet rigged on a 1/8 ounce heads are hard to beat when fishing over the shallow mud and scattered shell. Key on mullet activity and any slick that you can reach with a long cast.

When that bite slows, we either drift in 4 to 6 feet of water or fish the deep breaks along the ICW. Every lure in arsenal has potential when drifting the deeper water, but at least one fisherman in my boat is usually fishing a 4-inch Sea Shad or Flats Minnow under a popping cork. That setup will keep even the most inexperienced fisherman in the game all of the time.

Every year I vow that I will take the time to develop confidence in a 51MRMirrOlure, but I am rapidly running out of years to do so. I can\'t tell you how many times I have drifted these same flats with visiting Galveston based guides only to have them wear me out with that one lure.

The wildcard right now is deciding what time of the day to check out the revetment walls and at what depth to fish. One day the fish are crushing topwaters and Catch 2000\'s up against the rocks and the next they are eating topwaters and tails thirty yards off the wall. That bite can start early, late or even right in the middle of the hottest of days.

While it initially gained its notoriety getting bounced off the rocks on the jetties, a 3 to 5 foot diving crankbait like the Heddon Swimming Image or River 2 Sea Cranky M65 will account for most of the big trout I take off the revetment walls this month. A crankbait keeps you working, but the results merit the effort required to fish these shallow divers.

If you just can\'t resist chasing gulls you might as well forego the aforementioned patterns and techniques as that program is now a daily occurrence. It is easier to target fish chasing shrimp as they hold a little longer, but few bites can compare with finding big trout or schools of redfish blowing holes in pods of shad on the surface. Look for the shad to start bodying up towards the end of the month. Please take those extra few seconds to carefully release undersized fish as they represent the future of the sport.