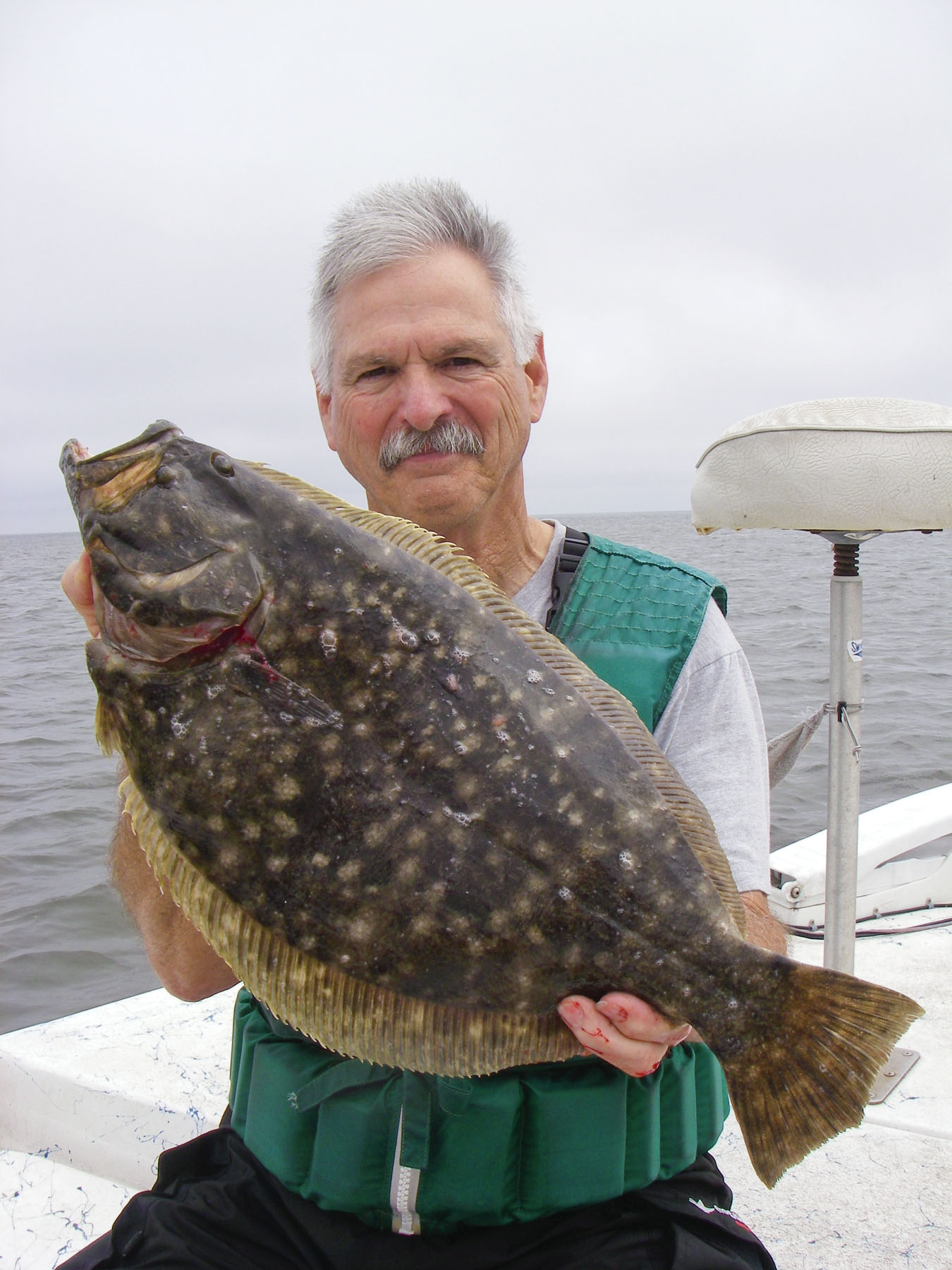 Gene Locke fooled this nice flounder with an H&H Usual Suspect swimbait.
I know this is going out on a limb, especially considering the fact that I rarely fish other venues, but I do not believe there is a hotter body of water on the Texas coast right now than Sabine Lake!

The cover of last month's magazine alerted folks to the fact that we were catching big trout and even the added pressure (lots of fishing folks apparently read this magazine) has had little or no affect. Most every night at the ballpark one of my grandchildren shows me one more time how to open a text message or photo on my phone and more often than not it's the report of another big trout.

A very good friend that prefers to remain anonymous has caught five trout over nine pounds since February and released four of them. The first one died due to a hook wedged in her gills. He has caught his share of big trout over the years, but hadn't caught a fish over eight pounds since 2007. Personal bests have been an everyday occurrence thus far in 2013.

No one, except perhaps the anglers that caught them, is getting overly excited about six to seven pound trout. The exceptionally high tides this month buried the flats in an extra foot of water and the egg laden females followed the mullet and shad right into flooded grass. She Dogs, Skitter Walks, and Spooks are hard to beat but we are still catching fish on Corkys and Maniac Mullets as well.

About the only area I can eliminate with any credibility is the middle of the lake and even that real estate has been good for numbers of trout and schooling redfish when the wind allows. There is no doubt that wading has accounted for the majority of the eight-plus fish and the list of areas that have coughed up bragging size specks is ridiculously long. The Louisiana shoreline from Garrison's Ridge all the way to Coffee Ground Cove and the flats bordering the ICW on the north end are all yielding big trout.

At least for one more month you can add the revetment walls to that list for both boaters and the legion of folks that walk the rocks and you get a better sense of just how insanely good it is right now. Traditionally, the Catch 2000, Swim'n Image and five inch tails like Assassin's Texas Shad have ruled those rocks, but this has been the year of the swimbait and plastics fished under corks.

Both the three and four inch H&H Usual Suspect in opening night-chartreuse and silver shiner have been very good. Topwaters are also lethal when the trout start popping slicks within a cast of the rocks.

Four inch paddle tails like the Sea Shad, Flats Minnow and DOA shrimp are all productive choices under the cork on 24 to 30 inch leader, but Egret's VuDu Shrimp is the new dog on the block and it has ruled the roost. While it is very much on the small side compared to other imitation shrimp, it consistently dupes big trout as well as numbers and is tough as nails.

This incredible bite has taken place in spite of a howling wind that has eliminated the middle of the lake and one shoreline or the other most days. For those anglers more interested in non-stop catching than the pursuit of a trophy, the gulls will lead the way on calmer days. Based on how good it has worked thus far, I can only imagine how effective the Cork-VuDu Shrimp combination will be when the trout and reds start hustling shrimp in the open lake.

The other bite that started earlier than usual and has continued to improve is the flounder bite in both the lake and the bayous. Not unlike last year, the average size of our flounder has been very good with fish over five pounds not that uncommon.

Points lined with cane on the Louisiana shoreline and the small drains and bayous have been especially good as have Willow and Three bayous. For the artificial lure fishermen I would have to rate a Gulp curly tail as the number one choice, but a pumpkin-chartreuse Assassin Sea Shad on a 1/4 or 1/8 jig isn't far behind. Tipping the Sea Shad with a small piece of shrimp or spraying with Bang garlic adds to its effectiveness.

While this all has to slow down at some point, I can still hope that next month's report mirrors this one. Until then we are just going to count our blessings and keep on keeping on!