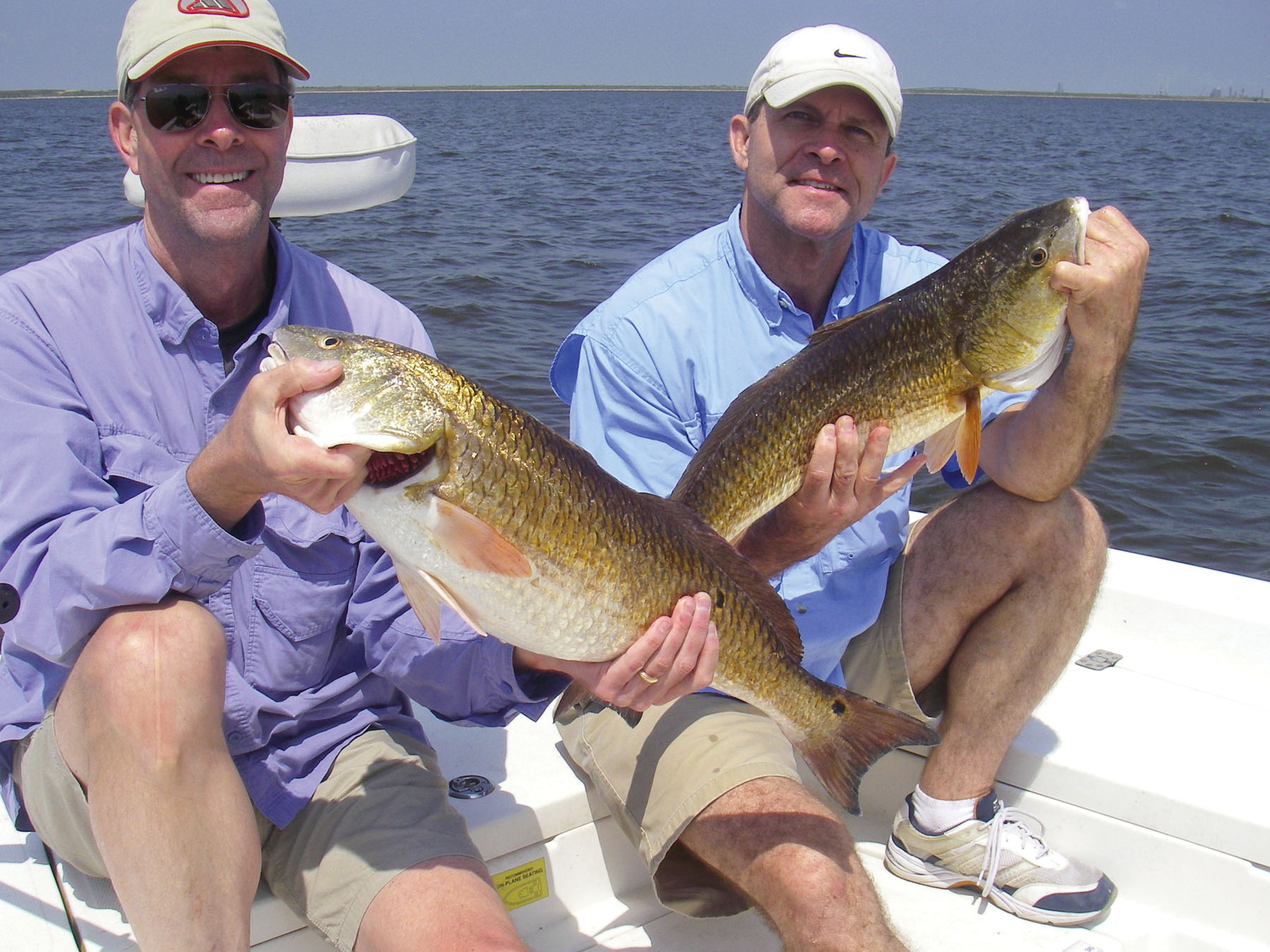 Joe Matthews and Bill Blizzard had their way with the redfish.
While our fish are now transitioning from hustling mullet to herding shrimp, area fishermen are transitioning from "I've never seen a spring this cold" to "I can't ever recall the wind blowing this hard every day!"

It is obvious they don't maintain a fishing log, but in all fairness, it has been unusually cold and a stiff wind from any direction has been almost a daily occurrence. When the wind has granted us even a modest break we have enjoyed a very good flounder bite and the redfish are already schooling in the open lake.

We fared much better with the trout, especially the larger variety, through early April, but the combination of bull tides and an extended drawdown on Toledo Bend has made them difficult to consistently pattern. As the salinity level improves, the bite on the flats bordering the ICW and ship channel could light off overnight.

Both revetment walls, depending wind direction, are yielding the most consistent trout bite. I have seen very few over 27-inches caught thus far but the fish hustling everything from shrimp to mullet are in the three to four pound class most days. Catching these fish usually requires a little experimenting.

In the same morning, the best bite can vary from throwing a She Dog against the rocks to crawling a Die Dapper or Sea Shad along the base of the wall. At the same time, fishermen walking the rocks are usually catching fish on both live and Vudu shrimp fished under a cork. As if that weren't enough to cipher through, a Swimming Image, Catch 2000 or Usual Suspect cranked just beneath the surface may be the ticket at any hour of the day.

Hopefully by the time you read this the bite on the north flats will be in full swing. When this happens, lure color is usually more important than choice of lures. I prefer a topwater at first light, but they will readily attack everything from tails to swimbaits. Homesteading isolated patches of shell can be exceptionally productive. I will start every morning on these flats and move further offshore when the wind allows.

The open lake redfish bite is worth sampling but too much wind can all but eliminate any hope of locating them from day to day. Over the past few weeks, the majority of these fish have been a tad oversized, but watching them demolish a topwater is not all bad. Once you are in casting range there is not a lure in your box they will not attack. It only takes one or two gulls that will not leave a small area to help you locate them if they're not already be blowing bait out of the water.

I built my guide business in the early 80s on the strength of figuring out flounder habits and targeting them with ultra-light gear and 1/8 ounce jigs. The netters pounded the larger trout on Sabine and redfish were so prolific that we never gave them a second thought, but clients would still travel to learn how to fish the flounder program.

We don't get the full benefit of those regulation changes here on Sabine because you can still keep the more generous Louisiana limits by simply launching on the other side, but even at that, there is no doubt that our flounder numbers have improved significantly. Not only am I now finding more flounder but the average size has improved dramatically as well!

Either tide change is an asset when cashing in on this bite. If the tide is incoming or high enough to flood the cane, concentrate your efforts tight against the submerged roots of the taller stands of Roseau. The early stages of an outgoing tide are best spent fishing the mouth of a small drain exiting the marsh or one of the bayous.

Don't forget–recreational anglers can also fish the bayous and canals inside the Game Reserve, but you have to have a non-resident Louisiana license to do so. These canals are home to trout and reds as well and offer a heck of a Plan-B when the wind turns the lake upside down.

Take a youngster fishing on your next trip!