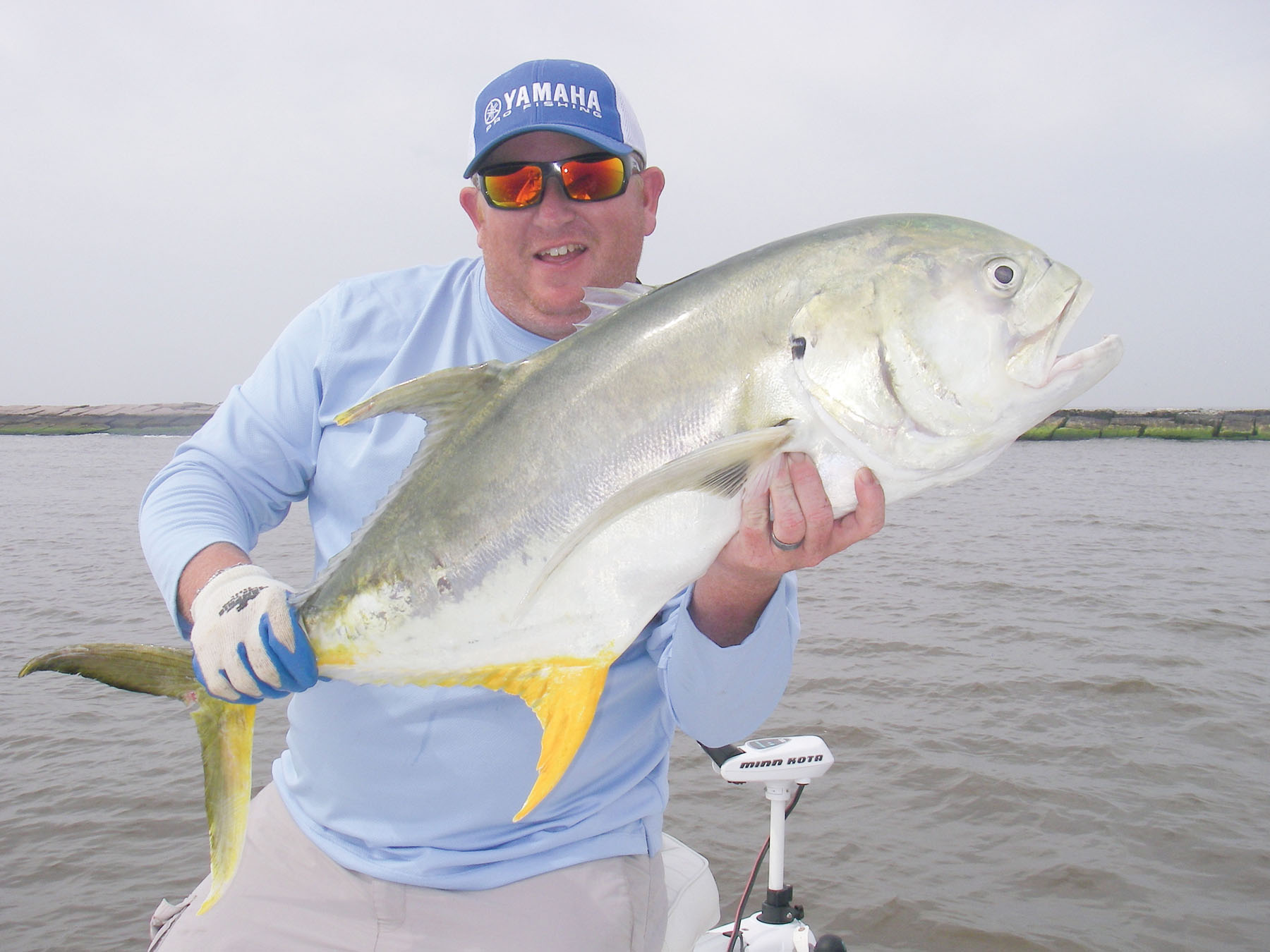 Jacks love crankbaits too!
Today marks the third in a row with no rain and no fisherman within casting distance of Sabine Lake is taking this phenomenon for granted. We have a cold front due in tonight with 90% chance and Toledo Bend is running both generators 24/7, but this was still a welcomed respite.

We have rescheduled lots of folks while trying to figure out what the trout are doing to adapt to the massive intrusion of fresh water and we obviously are not quite there yet. Other than lure choice, muddy water is of little or no concern to dedicated Sabine Lake trout fishermen, but water this fresh is another story.

Hoping to find trout closer to the ICW last week we drifted East and Middle Pass bouncing GULP and live finger mullet off bottom. We eventually kept one slot red, a drum and six channel cats. We also released one small flounder and two bass!

While it has been a struggle for me, it is due in part to my unwillingness to cast my lot from south of the Causeway to the jetties. While it is not exactly the north end of the lake, I have made a handful of decent trips between Willow and Green’s on the Louisiana side and the north revetment wall on the west.

I have been unable to score consecutive good days fishing this mid-lake area but the pattern proved to be exactly the same on both sides. Trout were holding closer to bottom in 6- to 8 feet; GULP, 4” Assassin Sea Shads and 3” Usual Suspect Swimbaits soaked with garlic or menhaden beat anything we tried.

In each instance the fish were holding well off the shoreline and constantly moving, presumably to either follow better salinity or massive schools of juvenile shad. The moving part is the killer when hunting trout that are not relating to shell or a depth change. I don’t think for one second the trout have vacated the lake but if you can’t find them they might as well have. The incredible amount of bait stacked in the bayous and the river will, however, eventually attract a lake full of hungry trout that have seen little pressure this spring!

The best news for less stubborn anglers is that swelling tide changes that usher in saltier water and more bait have produced a reasonably consistent bite south of the Causeway. When the wind allows, the Gulf side of the jetties has been red hot for oversized reds, jacks and some very solid trout.

Trout have been close to the granite and will jump all over a Die Dapper or Split-Tail Mullet crawled off the rocks. They will also eat a Swimming Image but so will bull reds and jacks and those bullies will just wreck your little crankbait.

The more dependable bite, even when the wind is blowing, is taking place on the five to eight foot breaks along the ship channel. Lighthouse Cove gets a ridiculous amount of pressure but the shoreline all the way from north of the LNG plant to just south of Lighthouse is producing decent numbers of 16- to 23” trout.

For anglers that happen to find themselves at the right place at the right time, the redfish bite can be “stupid good” when schools of slot fish start pounding away at small shad parading down the shoreline. Surprisingly, some very nice flounder are mixed with them most days. Look for egrets lining the bank and you are in the game.

I believe the first trout bite to light off in June will occur on the reefs north of the Causeway. We have already had a couple decent days in that area and while most of the trout have been small, they were there when all else failed. The most accepted technique for catching fish on shell is drifting with tide or wind and bouncing a tail off bottom. Watching your GPS will help you duplicate productive drifts.

Easily the single biggest mistake many folks make when fishing these reefs is fishing only this one technique. These trout are notorious for feeding higher in the water column depending on the available food supply and will aggressively chase everything from a Catch 2000 to a tail fished under a cork. Regardless of your approach, always keep an eye open for schooling redfish as tide changes and time of day mean nothing to them when they decide to go on a rampage.

It is not too late to sign the kids up for the CCA STAR and fish all summer!