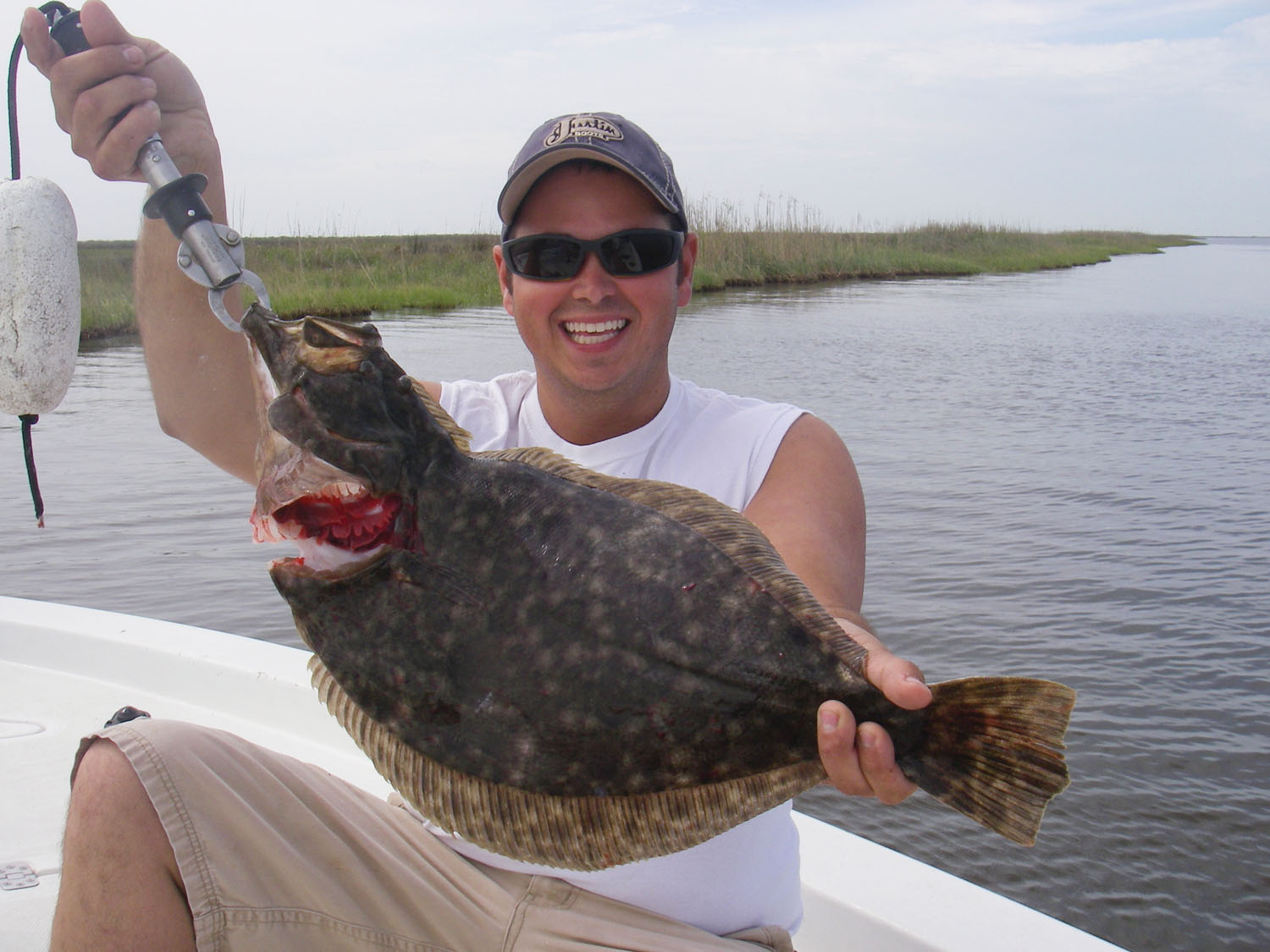 Over the past three weeks we have hosted two Redfish Elite tournaments on Sabine, weathered two more rounds of local flooding, fished in the rain twelve of the last sixteen trips and it is pouring right now. The Sabine River Authority has also had to once again increase the water flow out of Toledo Bend due to big rains north of us.

In spite of all of that we are still catching fish in Sabine Lake and surprisingly enough, that includes trout. We haven't been catching the big fish we normally find cruising the shallow flats this time of the year, but no one is complaining.

While we have been both surprised and pleased by how quickly the trout bite has rebounded, I have been even more energized by one of the best flounder bites we have experienced in years. Part of that is due to the fact that I initially targeted them virtually every trip while waiting out the trout, but there is no doubt that changes in regulations have made a difference.

Due to the mild winter the migration was average at best and a significant number of flounder refused to ever pack up and leave. We have not only been catching easy limits, but better size as well. Initially the key was fishing the dark water exiting the marsh drains, but with improving water clarity in the lake, we are now catching easy limits simply working the cane on the east shoreline.

There is really no need to fish live bait as that will only slow you down. While most of my clients prefer to fish a GULP swimming mullet I do almost as well with a three inch Usual Suspect. As a rule, I tend to catch a few less flounder with the swimbait than they do, but more redfish and trout. You can't go wrong with chartreuse or white in the GULP and both silver shiner and morning glory have been good colors in the swimbait.

With the extremely high water inundating the marsh lakes, the redfish bite has been phenomenal for folks that enjoy sight-fishing. The jetties have been nearly as good, but most of the redfish taken off the rocks are just too darn big!

It took nine 27-inch fish redfish weighing 70 pounds to win the first pro event and 67-pounds to win the second and they fished in absolutely miserable conditions. The winners of a recent local tournament brought three 27-inch fish to the scales that weighed 25.77 pounds anchored by a 9.30 pound fish. We are talking quality redfish doing their thing right now!

I have yet to find them schooling in the open lake, but with more normal tides and a little less rain, that bite is just around the corner. We are still catching a few drifting the flats with plastics under a cork. The most productive tails thus far have been 4 inch Sea Shads, 4-inch Lil' Johns and a Vudu shrimp. Chicken on a chain and purple demon have been our best colors.

If the daily soggy conditions we have been forced to endure thus far dry out even a little, the trout bite should be excellent this month. When the wind has allowed, the veteran rock walkers have already put together some very good days fishing both the north and south revetment walls on trout up to eight pounds.

Some are fishing live bait under a cork, but Catch 2000s, Swimming Images and topwaters have worked as well. Even following a howling southeast wind, that water clears up pretty quickly. Due to the wind and fresh water runoff, the bite on the flats off the mouth of the Neches has been hit or miss thus far, but it will happen.

The Causeway reef has been very consistent for anglers willing to take the time to figure out the bite, especially on incoming tides that usher in more bait and saltier water. Exploiting that bite to the max requires more than just dragging a tail over the deep shell and hoping for the best. Pay attention to your depth finder, don't be afraid to fish from five to twenty feet deep and never ignore tight groups of terns while fishing other patterns.

Remember–the kids may someday forget where they buried you but they will never forget a single day spent fishing with you!