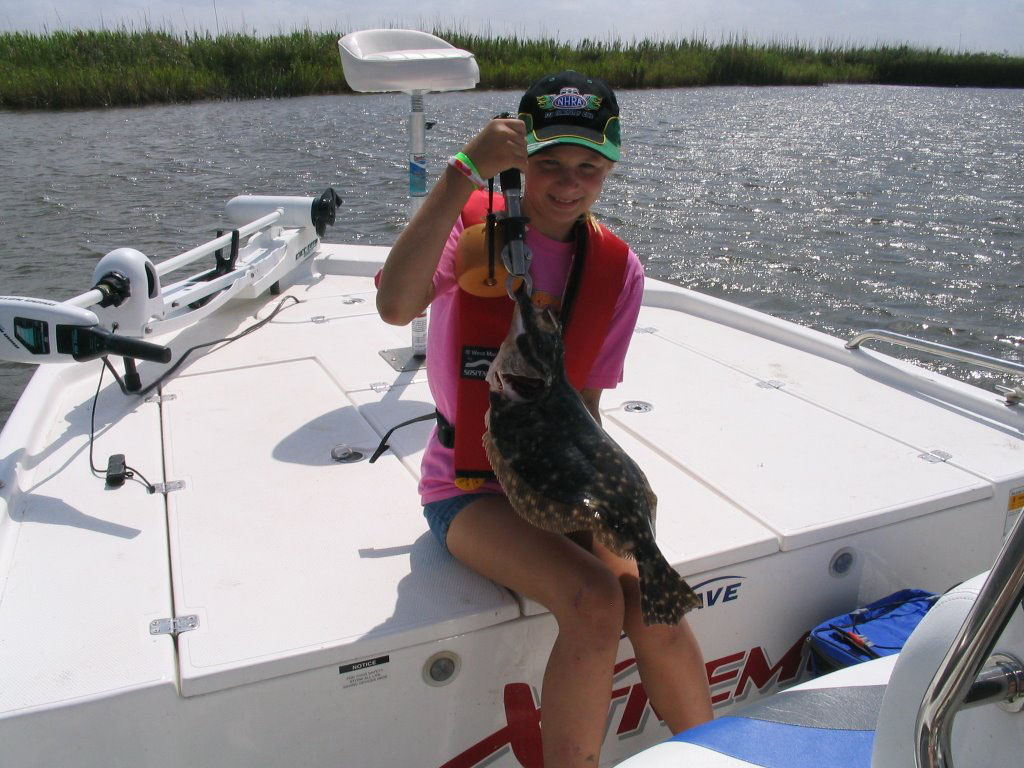 The warmer days of March can produce solid catches of flounder.
While the bite is diverse, this is easily the most frustrating and unpredictable month of the year for me on Sabine Lake. It holds great promise for everything from a solid flounder bite to a shot at a magnum trout, but unstable weather patterns will keep you humble.

There is no way of predicting what effect runoff from not only local rains, but both Sam Rayburn and Toledo Bend will have on salinity levels and an unwanted howling wind is a daily occurrence. It is not a question of whether or not it will blow, but from which direction.

There will be yet another variable to deal with this year as the LNG pipeline has become a reality and sixteen miles of it will be buried in the lake. The impact it will have on fishing while the work is taking place remains to be seen, but non-stop crew boat activity as well as transplanting tons of gumbo mud and shell probably will not make it any easier.

If you can accept the fact that the weather is not going to do you any favors and stick to your game plan, Sabine Lake can be as productive as any bay on the coast this month. As a rule, the only problem facing veteran local anglers is which species to chase. Salinity levels aid in that decision, but water temperature is usually the determining factor.

Warmer temperatures accelerate the baitfish hatch and the game fish are never far behind. One of the keys to cashing in on a very good early flounder bite is to take the time to idle along the shoreline of the main lake or in the feeder bayous and cuts and look for pods of tiny shad dimpling the surface. If they are there, they are easiest spotted on an outgoing tide.

Resident flounder stack up around any type of structure that alters the flow of the current waiting for the schools of juvenile shad to make a house call. Obviously, the mouths of the bayous and small cuts as well as the remnants of old duck blinds are choice spots to target, but do not overlook the root systems of Roseau cane dotting the shoreline or isolated stretches of clam shell near the bank.

Live bait will catch these flatfish when all else fails, but for my money, the mobility afforded by sticking with artificial offerings is the key to consistency. If I had to catch a flounder on Sabine Lake or give up my boat at the end of the day, I would undoubtedly take my chances with a three to four-inch plastic tail threaded on a one-eighth ounce jig head.

I would also add a small pinch of shrimp or one of the many available scents on the market. My first two choices are a one-eighth ounce horse head jig with a chartreuse or white curl tail grub or an Assassin Sea Shad rigged on a one-eighth ounce jig head. My two most productive colors are pumpkin-chartreuse or salt and pepper silver phantom with a chartreuse tail. When using the Sea Shad, I generally just spray it with a garlic scent made by Bang.

The GULP shrimp has become the bait of choice for a growing number of successful flounder fishermen on Sabine over the past couple of years as well. I will also rely on the spinnerbait this year more than I have in the past. We caught some of our largest flounder last year on a quarter ounce spinnerbait with a gold number three Colorado blade sporting a BLURP shad body in electric chicken or LSU.

The bonus with both the GULP and the spinnerbait is that they rate high on the food chain for redfish as well. I have caught very few trout with the spinnerbait, but the redfish seldom pass it up. They, too, are very much aware of the best places to take advantage of the shad buffet!

I am not trying to sell you on the idea of targeting only flounder this time of the year on Sabine, but I had a number of fishermen asking about that bite at recent Boat Shows. If our flounder are doing their thing this month, and they should be, you will be in the hunt utilizing these tactics.

The folks with a welcomed dilemma this month could be the trout fishermen. Wind permitting, they will have to decide most mornings whether to chase numbers under small groups of gulls on the south end of the lake or opt for a more deliberate bite and pursue larger fish further north. Playing the numbers game is much simpler as the birds are either there or they or not.

Look for the larger trout on the Louisiana flats north of Green's Bayou or those just south of the spoil islands bordering the Intracoastal canal. You can expect the water to be silted up most days by either runoff or wind, but the trout are still there and they tend to feed the best on an incoming tide.

She Dogs, Catch V's, Corkies, and Crazy Croakers are all good choices depending on the aggressiveness of the fish. Water clarity will determine color choices, but we do well with black-chartreuse, bone-chrome, and electric chicken. Pink is another color that can really get hot as well.

When the water is especially dirty, we also catch solid trout in these areas fishing a morning glory or red shad 5-inch Assassin Shad under a popping cork. With a little cooperation from Mother Nature and a measure of tenacity, I think you will find the action on Sabine Lake worth a visit this spring!