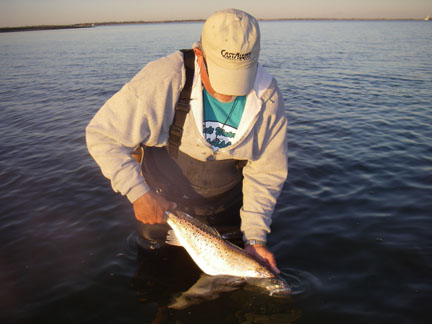 This past month has been especially good for fishermen on Sabine Lake willing to slow down and target big trout. It has been several years since we have enjoyed such a consistent run on 26 to 29-inch trout and they are showing no signs of slowing down. I cannot recall ever having as many clients catch personal bests and only one of those fish was not released to pass along her superior genes!

The combination of very little rain, little or no runoff from Toledo Bend or Rayburn, and surface temperatures that have seldom dipped below 58 degrees have kept both the mullet and big trout on the shallow flats for longer periods of time. The water clarity has also remained surprisingly good in spite of winds that pin anglers on one shoreline or another on most days.

We have enjoyed a few of those days when the larger sow trout will bury a topwater like the She Dog, Skitter Walk, or Spook, Jr., but suspended baits that imitate a mullet are still providing the closest thing to a guarantee. Catch Fives, 2000s, and Corkys have consistently duped our largest trout thus far.

Our list of "must have" colors has been very short and oddly enough it does not include several color combinations that are usually very good for us. The hottest colors have been pink, chartreuse, or a combination of both. The Catch Five and 2000 in electric chicken or chartreuse-pearl, and the pink hologram Corky Devil have ruled the roost.

It should also come as no surprise that most of our bragging size fish have been taken when wading mud and scattered shell in 2 to 3 feet of water. You can get a few swings drift fishing if you will stay off the troll motor, but you cannot catch the numbers that you can on foot.
Because the mud in some areas makes it difficult to cover much ground, we usually locate the fish by drifting then anchor up and wade.

Virtually everything in your arsenal will work this month, but you are in the hunt for the big three everyday when fishing plastic tails. I will spend a great deal of my fishing time relying on an Assassin Sea Shad or the longer Texas Shad rigged on a quarter ounce head in March and April. They are equally deadly bounced across the bottom or drifted on a 20-inch leader under a Kwik Cork.

Color choice will vary depending on water clarity, but Texas roach, chicken on a chain, red shad, and limetreuse are all proven colors. If you are madder at the reds and flounder than trout, work the Roseau stands on the Louisiana shoreline with a weedless Johnson spoon or Red Daddy spinnerbait on a high tide.

The wild card this month will be the deep shell reefs north of the Causeway on the south end of the lake. I prefer an incoming tide pumping in clear salty water from the Gulf, but the fish will bite on either tide change. Be prepared to give up lots of jig heads to the unforgiving shell and bring along a variety of colors as these trout can get very picky.

I know fishing money is hard to come by right now, but don't leave the kids at home to save a few dollars. You will never get a better return on any investment than a day spent on the water with your youngsters!