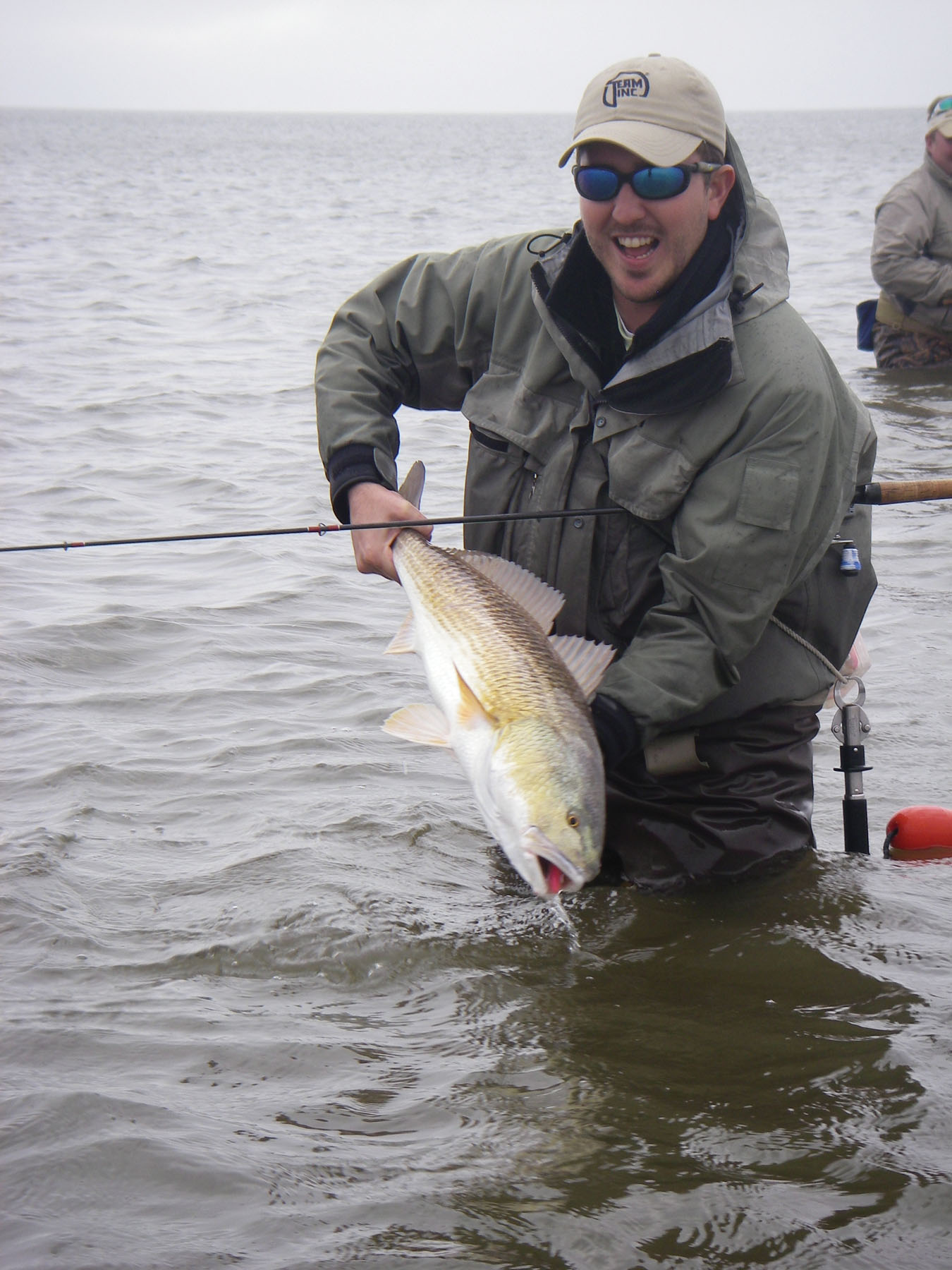 Rusty Frederick sends another nice red on its way.

The most important news of late was not what happened, but what did not happen. An oil tanker and a tug pushing two barges collided in the Sabine-Neches ship channel across from Pleasure Island resulting in a spill of 462,000 gallons of crude oil. Quick response, the location of the spill and favorable weather conditions were all factors that contributed to avoiding an ecological nightmare.

The response was both immediate and aggressive as some 650 workers representing federal, state, and local agencies worked round the clock to quickly contain and clean up the spill. Only time will tell how much oil escaped beneath the booms due to tide changes and wind, but at this point Keith Lake is the only marsh area that has been affected.

Had the collision occurred just a little further north at the intersection of the Neches and ICW, however, the spill would have been much harder to contain and not only the lake, but surrounding marshes from Bessie Heights to the Game Reserve would have been compromised.

While the economic impact has been bad enough, we were spared the devastation of a unique ecosystem!

We are still fishing around cold fronts while keeping our fingers crossed that the damage from the oil spill was as minimal as it first appeared and each warm-up has yielded excellent fishing. Because a southeast wind ushers in most of the warmer days, the Louisiana shoreline has produced the more consistent catches.

Both wade fishermen and those preferring to drift flats in two to four feet of water continue to score well on redfish and trout. Tide changes, more especially incoming tides, stack mullet up against the shoreline and the fish are not far behind them. The better bite on an outgoing tide, as expected, is taking place around marsh drains and the mouths of the major bayous.

We have been absolutely covered up with slot reds and the trout fishermen refuse to have the last of their Corkys mauled by the bullies until they are sure they can get more. I think that is one reason that we have not seen more trout over seven pounds caught thus far this year.

We have caught a substantial number of trout in the five to six pound class on both the Catch V and 5-inch tails like the Assassin Shads and MirrOlure mullets, but it seems that the reds are forever crashing the party and they like the same lures as well. Our most productive colors in the Corky have been pink and dayglow while electric chicken and bone-black back are very good in the Catch V. Red Shad, pumpkin-chartreuse, and morning glory are hard colors to beat in the plastics.

Toledo Bend is low right now so we might not get hit too hard with runoff this month. Because we have experienced a colder winter this year, I look for very little to change in the patterns. We should see a little more topwater action, but the same lures along with the MirrOdine and various swim baits are going to account for most of the fish.

As the winds become more variable and undoubtedly stronger, we will be able to spend more time on the flats behind the islands on the north end of the lake. The fish up there have not seen a great deal of pressure thus far and there is already a great deal of bait trading through the passes on tide changes.

I also look for our flounder bite to be better than it has been in years based on what we have seen over the past two months. Virtually every good trout outing has yielded several flounder and more importantly, they have been fish in the three to four pound class. They are out hustling the reds and trout for the same tails and suspending hard baits.

Drifting the Causeway reefs or running the protected bayous will be Plan A for some folks, but they are great backup plans at the very least. Don't forget that you will need a Louisiana license to fish the bayous on the east side of the lake and that you can only legally return to a Texas launch with Texas legal fish.