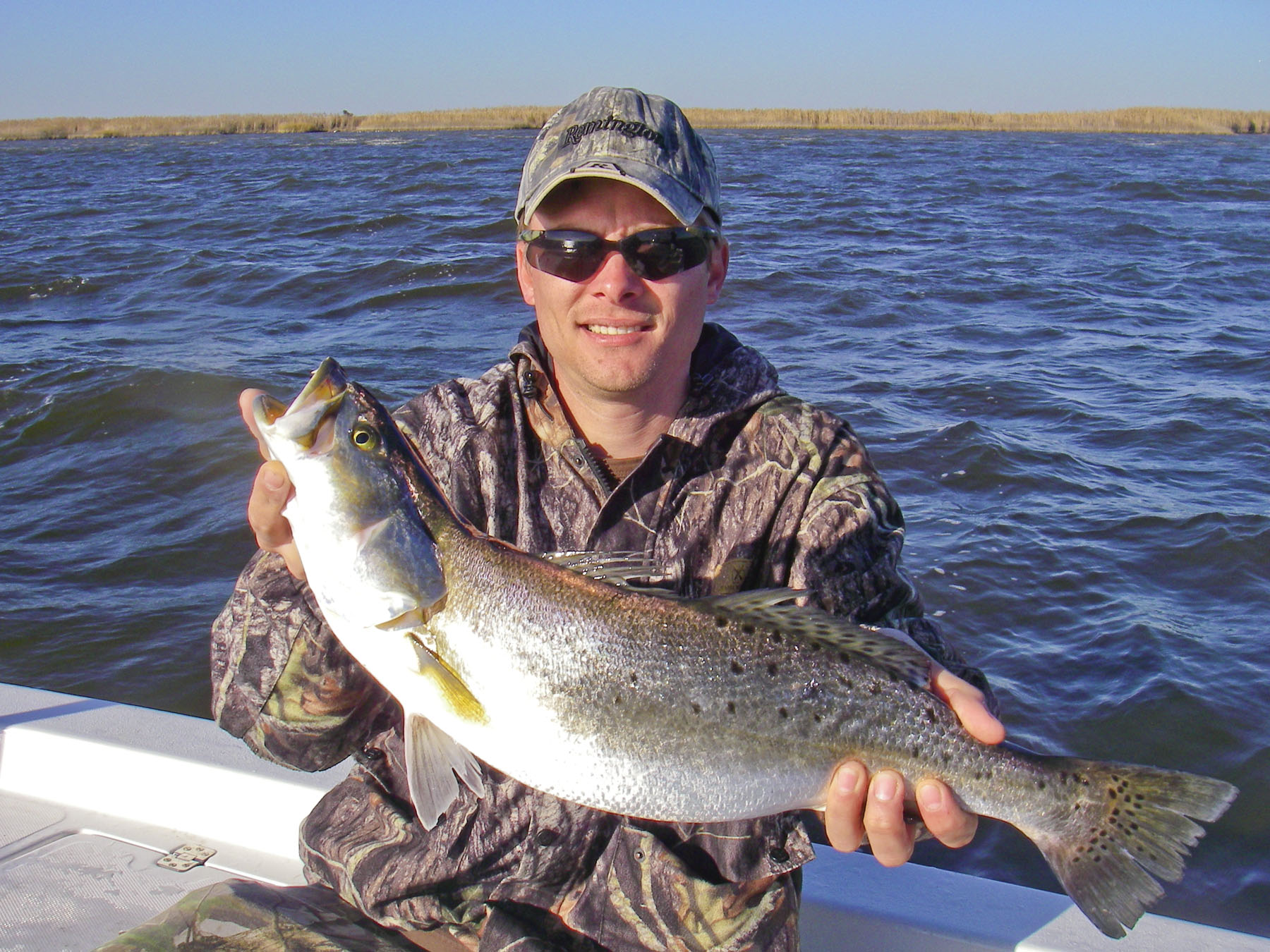 Dustin Galmor caught this nice trout drifting deeper water.
You can tie on darn near any lure in your tackle box and if you are close enough to reach the water you can catch a redfish on Sabine. That bite has not slowed down all winter long, even in the face of some seriously cold weather and has only gotten stronger as surface temperatures begin to recover.

It was that way throughout the spring and summer, but that bite usually slows down at least a little in the winter. Not this year!

On the coldest of days with surface temperatures stuck in the mid-forties and low tides sucking the bottom out of the lake, we were still catching obscene numbers of reds in less than three feet of water. There was and still is no need to waste Corkys or swimbaits as they will hit anything you drag in front of them.

I long ago learned to never complain about any bite, but the hordes of redfish have made it especially difficult to pattern solid trout this winter. Last year we could at least catch a few big trout wading the shallow flats before the redfish would move in and scatter them. This year, rather than compete with the rowdy bullies for their next meal, the trout have apparently taken up residence in a little deeper water and we have done far better drift fishing than wading.

Even after discovering that the better concentrations of trout were ganged up in deeper water, we have caught very few fish in the seven-pound class. Most of the trout we are catching, however, are twenty to twenty-four inch fish and that makes it a little difficult to seek out greener pastures. The few trout that we have caught and released over seven pounds were taken in the deeper water as well.

While you have to develop confidence in any lure to consistently catch fish with it, there is no doubt that Assassin's new Dapper Die has been as much a part of our success as the move to deeper water. It has been a game changer since day one and works best for us when rigged on an 1/8 ounce Pro-Elite head.

The sculpted body is more detailed, but it's the larger profile that makes this bait so lethal. Its unique shape all but eliminates any rollover on a steady retrieve and the throb of the tail keeps you in contact at all times. It apparently also produces just the right amount of vibration as the majority of our strikes have been sure enough train wrecks!

When the trout are feeding in the top column of water, we have also done well rigging a TTF Red Killer weightless on a 3/0 wide gap worm hook and fishing it under a Kwik Cork. It is smaller than the new DD, but also has a wider body and finicky trout can't resist its slow erratic fall after each pop of the cork. The hottest colors have been glow-chartreuse, pumpkin-chartreuse and morning glory.

Don't overlook the north and south revetment walls this month as you can fish from six inches to six feet deep in the span of five feet and the trout patrol these rocks throughout the day. When they are hustling mullet just beneath the surface and tight to the wall, a She Dog, Swimming Image or Catch 2000 is hard to beat. Your favorite tail rigged on a 1/4 ounce head works well when they are holding at the base of the rocks. Regardless of water clarity, for some reason opening night is a consistently good color when fishing the walls.

The wild card this time of the year is drifting the deeper oyster reefs on the south end of the lake, but thus far that program has been slow at best. It is, however, a bite that can turn on overnight and the deeper shell can yield not only good numbers, but big trout as well.

These patterns could all go on hold should the winter linger longer than we would like, but at the very least the redfish are still going to provide a security blanket as we are absolutely covered up with them. One other option is to fish the bayous on the east side of the lake and take advantage of a flounder bite that has improved daily. You are still going to have to deal with the redfish, but that isn't all bad.