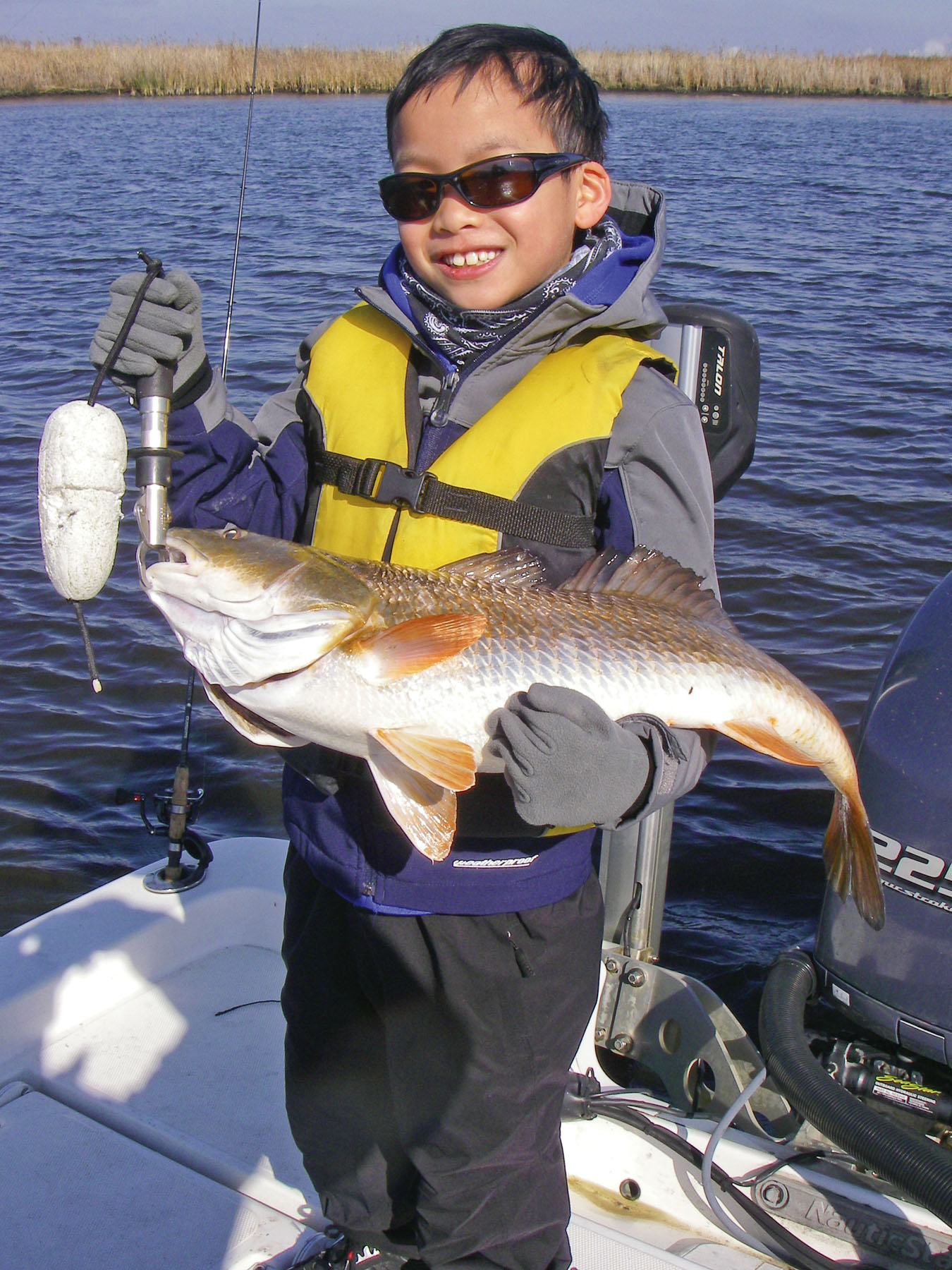 An armload of a reason to smile on a cold fishing day.
I pulled the hood on my Frogg Togg Toad Skinz a little tighter leaving just enough opening to see the batter and catcher. It was 48 with an intermittent bone-chilling mist that slowly soaked nine players, more concerned with getting back to the dugout than making a play.

That this day was deemed fit to practice outside spoke volumes as to what diehard trout fishermen have had to contend with. We have only been totally locked down due to ice a couple of times but virtually every trip has begun with frost on the boat!

Prior to the onset of the coldest winter we have experienced in years, the trout bite on Sabine was already markedly different than the year before. Very un-winter-like, the numbers have been crazy good, but the size wasn't there. I have never seen so many aggressive trout in the 14 to 17 inch class. The smaller fish are a mystery but there is a valid reason for the scarcity of bragging size trout.

A significant number of the usually more productive flats have been all but unfishable most days due to wind, so those fish have gone untouched. Areas like Coffee Ground Cove, however, typically yield some of our largest trout this time of year, but the fishing pressure there is unprecedented. It has been so crowded that those preferring to wade have just written it off!

When the lion's share of fishermen are idling through a flotilla and competing for the same bite it scatters the bait making it tough on a trophy trout looking to ambush one big easy meal every couple of days. Hopefully, by the time you read this most of the lake will be accessible on a more frequent basis and locating big trout will not be an SRO event.

In fact, with the water clarity as user-friendly as it is right now, I would bet my last Corky Fat Boy or Maniac Mullet that we will see more big trout taken this month alone than we have seen in the past two. There is no substitute for right place-right time but, it also helps to have the most effective lure on your line as well!

Maybe it is due to the amped-up presence of smaller trout but we have caught far more trout thus far on smaller lures like the Crazy Croaker, Soft-Dine, and Catch 2000 than their larger brothers. Even the shorter tails like the Sea Shad and Flats Minnow have been more productive than five-inch tails like the Assassin Shad, TTF Flats Minnow XL and Split Tail Mullet. I do not, however, look for that trend to continue.

Regardless of weather conditions March may well be the best month of the year for frequenting mud flats that border the Intracoastal several times throughout the day. More specifically, start your search along that 10 to 15 yard stretch of real estate that drops into the deeper channel. It is not unusual to catch several big trout in a single spot without ever hitting the troll motor.

There is no magic lure for exploiting this bite as I have been burned by visiting anglers chunking everything from a MirrOlure 51M or 52M to Rat-L-Traps. When I am not throwing a suspending mullet imitation, however, I often start my search with a four inch Usual Suspect Swim Bait or an Assassin Die Dapper rigged on an 1/8 ounce head. When fishing tails, you will have to compensate for strength of tide with the weight of the jig.

These same lures, along with She Dogs and Skitter Walks, will also work on the trout patrolling the major flats dotting the Louisiana side. The absolute worst mistake you can make, outside of not fishing, is to try and cover too much of this water too quickly. Even when wading we hold tight and wait for the fish to feed over small patches of isolated shell.

I occasionally catch a little grief for relying on the cork as much as I do throughout the year, but I am convinced of the fact that it keeps the bait in the strike zone, making it worth its weight in gold. We don't just drag Gulp or a VuDu shrimp around underneath it and hope for the best. A five inch tail rigged on a light head or even an unweighted 3/0 hook will dupe winter trout when nothing else will.

We will eventually thaw out as will the big trout and it will be game-on. Dress warm, pack extra dry clothes and some high energy snacks; and believe that every cast will be the one that makes a memory!