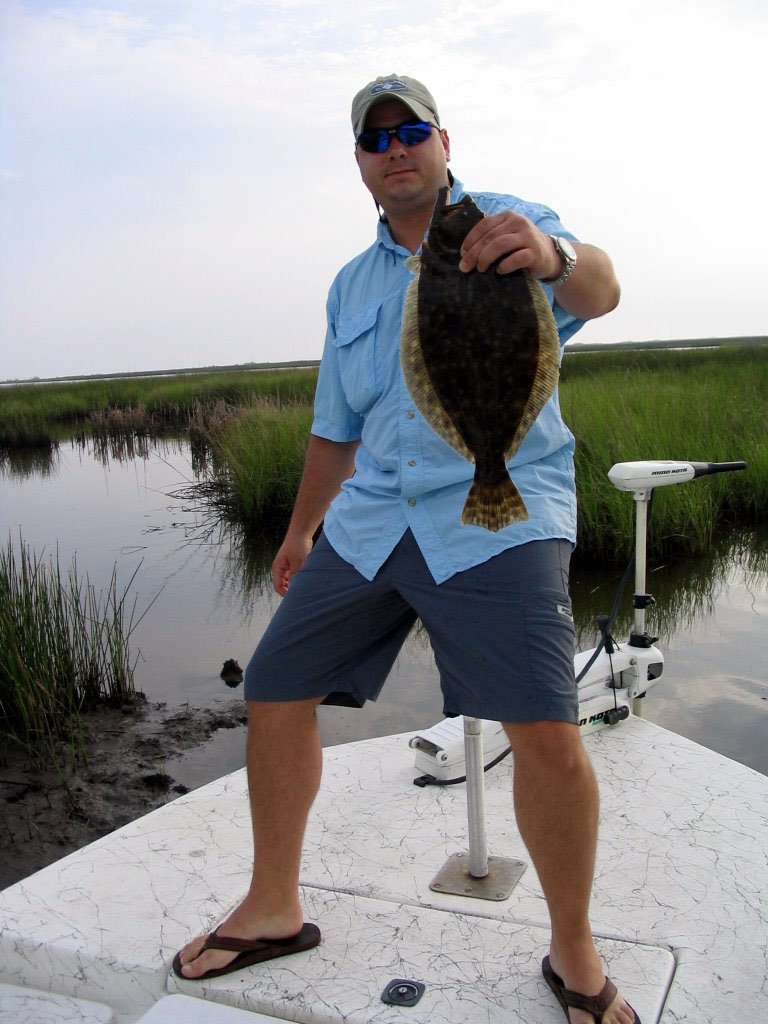 Check out the marsh drains for solid flounder.
Aside from never having your phone ring, I can think of few things more frustrating for a fishing guide than being unable to pattern fish on your own water. The month of March and too much of April were literally blown away by daily winds in excess of 25 miles per hour and I struggled!

Ironically enough, the spring fishing on Sabine Lake is most often slowed by excessive runoff from Toledo Bend and Rayburn as well as local rains. This year however, the lake has been so muddy due to the pipeline work and a howling wind not from runoff and low salinity issues.

Because I am still unsure of the impact of sixteen miles of dredge material in the open lake, even 37-years of guiding may be of little value in predicting what to expect this month. My hope is that as the winds diminish, the loose material will settle out closer to the immediate site. If that happens, we could experience our best fishing in years, as there has been very little fishing pressure thus far.

The wild card this month will be the Causeway reefs. The fishing is always unpredictable for anglers choosing to exploit the largest patch of shell in the entire lake, but ignoring the potential is a big mistake. Tide changes are the prime times to drift these massive ridges of oyster shell.

A GPS takes the guesswork out of repeating productive drifts, but keeping your plastic at the right depth is the name of the game. There are days when we have to utilize a half-ounce jig head and a drift sock just to compensate for the strength of tide.

As a rule, the length of the plastic is not that critical. I fish both the Assassin eels and the Sea Shads just in case, but color is another story all together. For that reason, I carry a duffle bag full of choices out of self-defense when drifting the reefs.

We have our basic "go to" colors, but you can get embarrassed should they decide to dine only on colors like drunk monkey or candy corn and that does happen. It is also important to remember that joining the crowd and drifting the deeper breaks is but one option in this area.

Always keep an eye out for gulls working over schools of trout and redfish between the south revetment wall and Blue Buck Point. We also do well fishing the west pocket with plastics under an Assassin Kwik Cork or Paradise X-treme Popper. I prefer both of those corks because of the resilient titanium wire. There are also days when a Catch V or She Dog are even better choices for both larger trout and redfish in this shallower water.

The action at the jetties will be improving and could well provide the most consistent bite of all. The wind will dictate which side of the granite riprap you fish, but both sides can be very productive throughout the early summer months. Start your day at first light working a Top Dog Jr or Super Spook right up against the rocks and hang on. When that action slows, an even stronger bite is often just cranking up.

You cannot go wrong bumping an Assassin eel or five inch Sea Shad down the rock wall. You are going to lose a few jig heads, but the reward is worth the risk. We also do well with suspended lures like the Catch 2000 and Mirrodine in pearl-chartreuse and chrome patterns.
Depending on wind and water clarity, the Louisiana shoreline will be tough to beat for both flounder and redfish this month. While most of the local fishermen tend to pile up around the mouth of one of the bayous or cuts, the bite can be equally good on points and along stretches of Roseau cane.

These fish will see a lot of GULP and live bait, but I am more partial to the mobility afforded by fishing the spinner bait and a curly tail grub or Sea Shad. Glow-chartreuse and pumpkin-chartreuse are easily our most productive colors when working the root systems and indentations. A little Bang garlic scent or tipping with a small piece of shrimp helps with both species.

Because that scent factor is important for both redfish and flounder, we replace the body on a quarter ounce Redfish Magic spinnerbait with a BLURP Sea Shad. The tail provides added vibration and the built-in scent can make a big difference on tough days.

Look for the larger trout, as well as redfish, in these same areas in 3 to 5 feet of water. This bite often holds up even through the hottest part of the day. Swimming an Assassin on a sixteenth- ounce head or fishing a Catch V just beneath the surface can be deadly. Because most of our strikes occur at the end of extremely long casts when fishing these shallow flats, I rely on 30- pound Power Pro braid to eliminate the stretch factor.

The most overlooked areas this time of the year are the north and south revetment walls. Fish them much the same way you would the jetties, but make repeated casts to the same spot when you catch a fish. It is not unusual to find several big trout working a tight school of finger mullet along the rocks.

Do yourself a favor and make it a point to take the kids fishing more often this summer. The rising cost of gas cannot be ignored, but the investment will pay huge dividends. Sharing a day on the water will forever be a better option than the risk of leaving a youngster with free time and nothing to do!