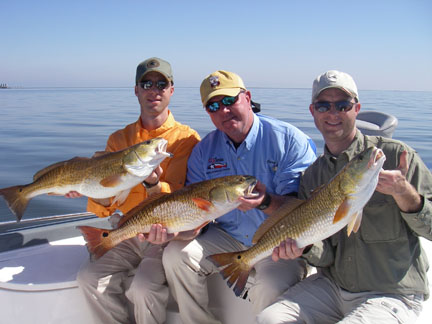 The Barths kept three reds for the grill on a calm day on Sabine!
We are rapidly making up for our shortage of rainfall, but it has not hurt us like it would have in the colder months. The wind also continues to blow a little harder than we would like on a daily basis, but no one is complaining as long as the fish continue to bite.

Seemingly every month has offered up something new ever since Ike rearranged the entire ecosystem and the past month has been no different. When the trophy trout bite slowed, we focused on the flounder in lieu of chasing smaller trout under the birds and we have done well on fish up to five pounds.

The improved flounder bite was a change in itself, but the more significant change has been the fact that they relocated to a new neighborhood. Even during the bull tides when they traditionally ambush their next meal in the roots of the cane bordering the shoreline, they now prefer to hunt in the submerged grass 20 to 30 feet off the bank.

The flounder up in the bayous and drains on the Louisiana side of the lake are also holding in debris washed out of the marsh. We are fishing our way through it with BLURP Sea Shads, quarter ounce Red Daddy spinnerbaits, and GULP shrimp. They are sharing their new hideout with lots of slot redfish that will jump all over the same offerings.

I look for that bite to only improve this month if we can avoid too much runoff. We have also finally accepted the fact that both the trout and redfish are comfortable in the islands of grass standing in 3 to 5 feet of water. Regardless of whatever Plan A is, at some point most days we find ourselves returning to fish that grass.

I usually start with a black or bone-chrome She Dog, depending on water clarity. It is a tug-of-war from the moment they slam-dunk the lure and retreat into the vegetation, but we win our share of the battles thanks to 30-lb. Power Pro. We have also done well Texas rigging a 5-inch Assassin Texas Shad on a 3/0 Mustad wide-gap hook and fishing it under a Kwik Cork.

When the trout and reds are holding on the outside of the grass, I have done better swimming the 5-inch Texas Shad or one of MirrOlure's new 5-inch soft mullet just off the bottom. Opening night and Texas Roach have been very good colors for us. Both the MirrOdine XL and Catch 2000 are also hard to beat when fishing this pattern.

The never ending bite under the gulls occasionally slows down, but more often than not, is still going on somewhere on the lake. The school trout have been solid fish, but even when you can only find small fish chasing the shrimp, there are enough reds mixed in to check out your drag on a frequent basis.

When all else fails, do not overlook the revetment walls this month. At times they should be the first choice as they always hold at least a few trout and redfish. Chrome Traps, 2000's, and tails rigged on a quarter ounce head all work on both trout and reds chasing mullet in the rocks.

I finally got my hands on the new U.S. REEL Super Caster 1000 and have been using it for about a month. I initially filled it with braid and struggled a little, but I can darn near throw all of the line off the spool with 12-lb. mono. The drag is silky smooth, the tension controls are user-friendly, and the revolutionary levelwind is mesmerizing. I feel certain the braid problem lies with the Indian rather than the arrow, but at least to this point, the overall performance has been even better than anticipated.

"We all deserve a second chance and that includes fish!"