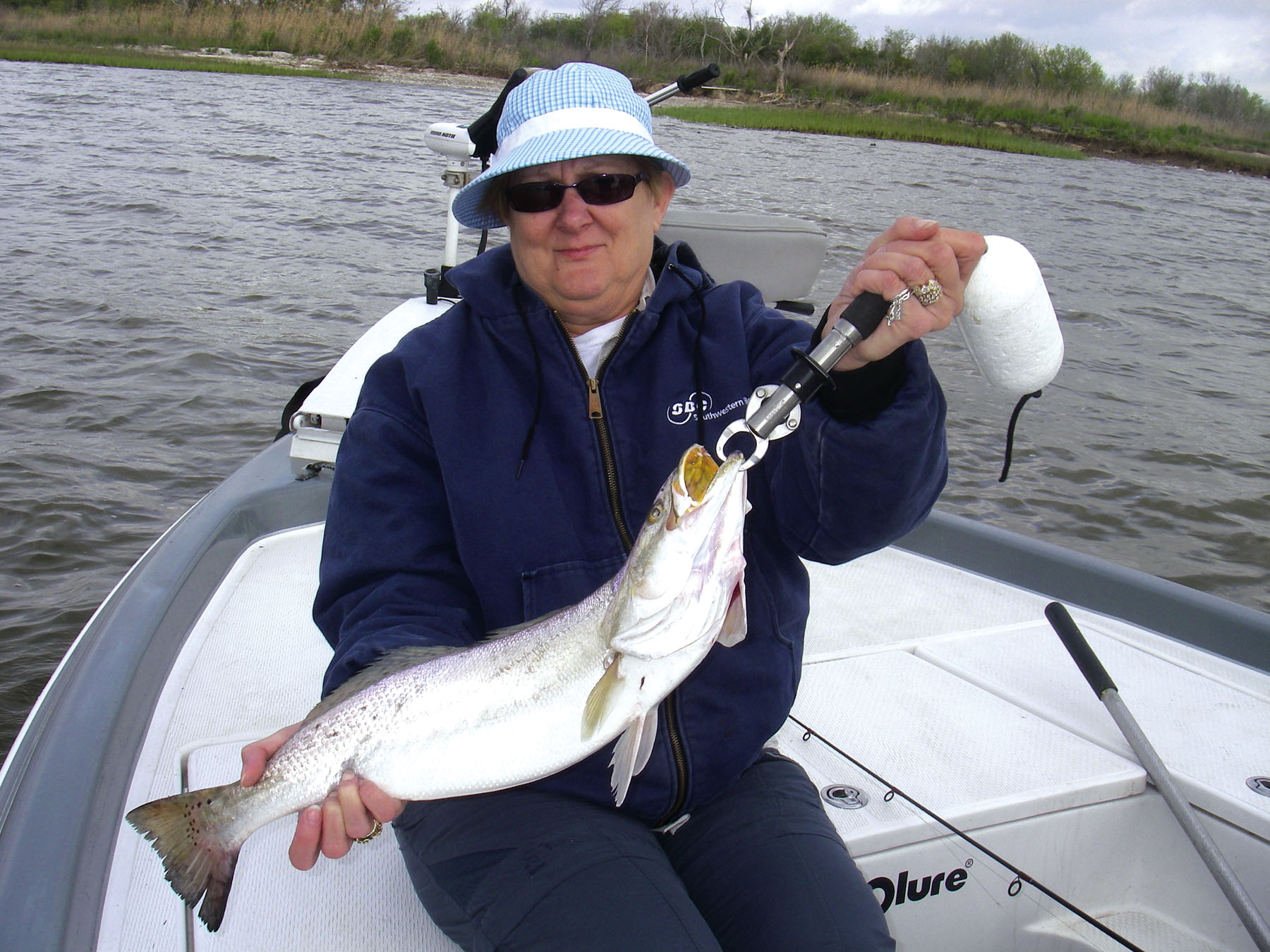 Darlene Barnes tricked this trout with a Catch V and set her free.
Twenty-four hours of gale force north winds brought a rapidly improving trout bite on Sabine Lake to a grinding halt in late March and the recovery was slowed by stiff winds from every direction in April.

The mud siphoned out of the bayous and back lakes quickly found its way into the open lake leaving local anglers with yet another challenge. The good news is that the big spring tides have recently ushered in not only more shrimp and bait fish, but clearer and saltier water as well.

That untimely blip on the "catching" screen and the inability to replenish a rapidly dwindling stash of pink Corkys forced us to get more innovative or park the boat and the latter was not a viable option. As the water gradually cleared on the north end and the trout started spending more time on the flats than in the ICW, we caught some of our largest trout of the year on electric chicken or pink Catch Vs and 2000s.

We also found that fishing the 5-inch Assassin Shad under a Kwik Cork rather than swimming it on a light head was much more effective in muddy water. Red shad has always been a good color under those conditions, but I have added pink to the arsenal and it has proven to be deadly even in the clearer water.

As the bayous continue to clear, rafts of newly hatched shad, shrimp, and finger mullet ride the incoming tides on the surface and the trout, redfish and flounder are all over them. Smaller topwaters like the She Dog will yield explosive strikes when walked through the middle of the mobile buffet.

The submerged grass on the Louisiana shoreline took a beating all winter long from both the fishermen and the wind, but it is still a magnet for baitfish. It is difficult to avoid the redfish, but there are some very good trout tracking finger mullet and shrimp in the grass as well. We have scored better on the trout swimming the longer tails on a 1/8 ounce head or jerking a MirrOdine XL through the grass.

We are actually ticking the deeper grass much like we fish a Trap for bass on the impoundments. The majority of our strikes come just after jerking the XL free. This program will keep you on the outskirts of the more serious fishing pressure on most days.

I have also found Bass Assassin's new Pro Elite jig head to be much more forgiving when swimming a tail through vegetation or even when allowing it to settle on the shell. The flatter and tapered head minimizes rollover and an upright hook not only results in more hook-ups, but fewer snags as well.

As much as I hate to fish the ship channel south of the Causeway and the jetties, it is all but impossible to ignore the catching potential over the next two months. Wind permitting, this area is as close to a guarantee as you can possibly get on most days.

The channel as well as the Gulf side of both jetties cough up not only solid trout, reds and flounder to the live bait fishermen, but those opting to probe the shell and granite with artificials as well. You should expect to leave a substantial number of jigheads lodged in the shell and submerged pipes, but the bite can be absolutely non-stop for anglers willing to work at it just a little.

The rigs just offshore will also attract more attention on the calmer days this month. Vertical jig fishing or live bait in the shadows of a rig can dupe everything from trout to an occasional turbocharged ling. Most rig fishermen prefer light tackle but be prepared to give up lots of line should you find yourself in a mismatch.

If by chance you still have fish in the freezeryou practiced catch and release a little too late on your last trip!