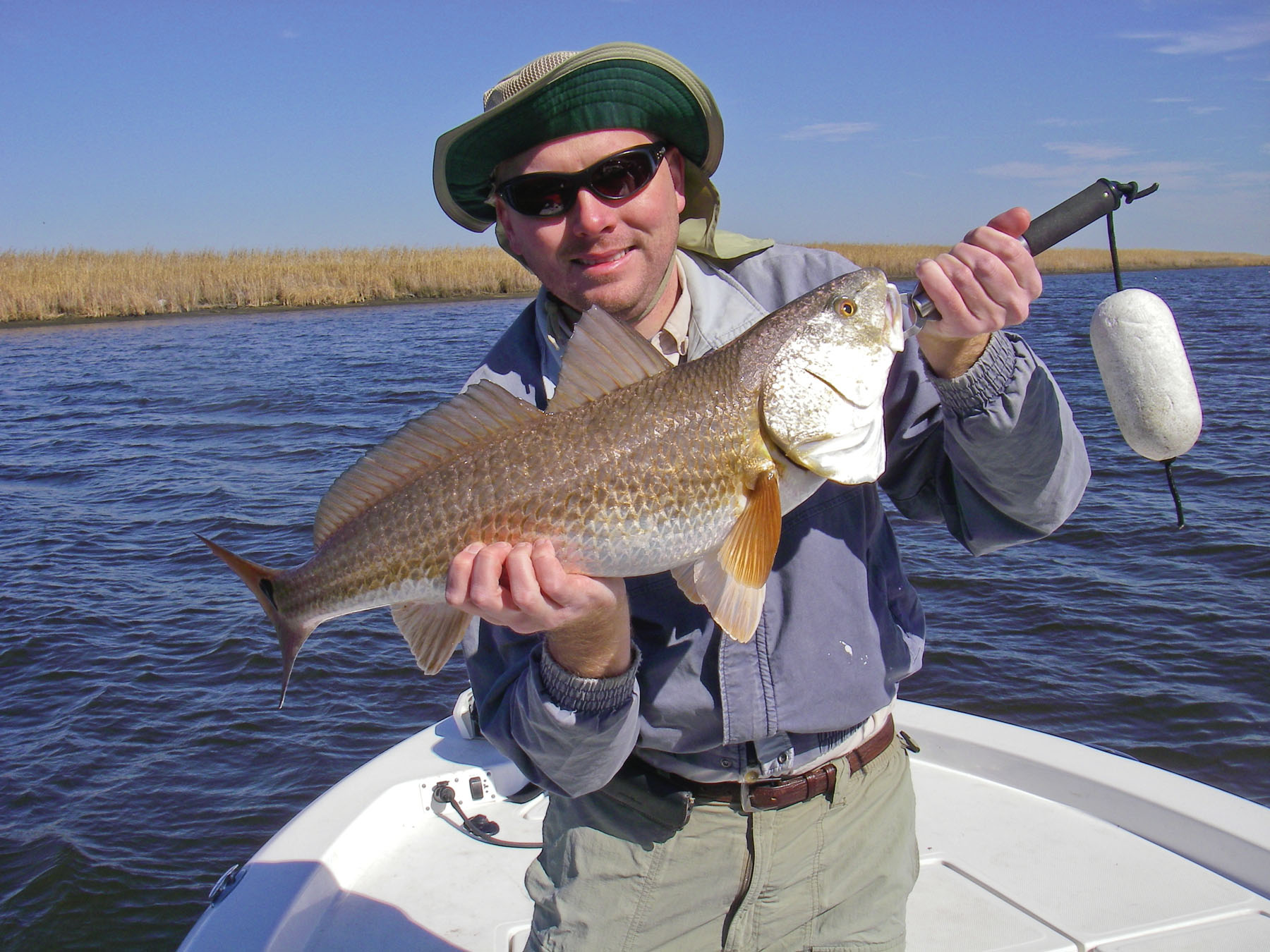 Dr. Dan Martin was catching and releasing on a windy day.
"And then one morning the wind went away and they were all good fishermen again!"

Thankfully, that is just the beginning of the story here on Sabine Lake. The turnaround began when a brutally cold stretch of winter gave way to warmer temperatures overnight and the wind has finally cut us a little slack as well.

It is not like those of us who know Sabine do not also know that you can still catch trophy trout and redfish in cold muddy water. Our problem is the limited fishable acreage when daily winds of 20 to 30 mph sweep across the open lake slamming chocolate waves against the revetment walls and ninety percent of our more addicted fishermen are wedged into ten percent of the lake.

With the entire lake now back in play most days, areas that went untouched over the past month are yielding solid catches of trout up to seven pounds, schooling redfish are running the open lake and the flounder bite has been excellent. It literally seems like one day we had no place to fish and the next day we couldn't decide where to fish first.

I will touch on this briefly only because those of you that have fished with me know that it is not my cup of tea. I have been doing well enough fishing the north end, but not taking advantage of the even easier bite on the south end of the lake is a mistake for those of you that do not fish Sabine very often.

The water is just beautiful on the tide changes and the redfish and trout continue to follow the shrimp all the way from the jetties into the lake on incoming tides. The LNG terminals have already yielded some of the largest trout of the spring and the Causeway reefs are on fire when you can time the tide changes right.

Bouncing a tail across the shell is still the preferred technique for catching incredible numbers, but a larger percentage of the bragging size fish fall victim to topwaters and suspending baits. Top Dog Jrs. and She Dogs, MirrOdine XL's, Catch V's and Corkys are deadly on trout holding around the docks and over the shallower reefs.

The bonus bite each day takes place from Garrison's to Blue Buck when the trout and reds are hustling shrimp and ribbon fish under the gulls. It is not unusual for that action to last well up into the morning and there are very few lures that will not catch fish when it starts.

With the exception of the scattered grass from Green's to Willow, the mid-lake bite has not been as productive for us as the north end. When the fish are feeding in the shallow grass, topwaters and spinnerbaits are hard to beat. When they are holding in 4 to 6 feet of water outside the grass, we have also done well making long casts with Tidal Surge's Crazy Croaker in pearl pink or pearl chartreuse and fishing it in the top of the water column on short twitches.

Our solution for even the toughest days is still fishing the smaller 4-inch Assassin Sea Shad or Texas Tackle Factory Flats Minnow under a Kwik Cork. That combination will catch everything from flounder to trout in water from a foot to six feet deep. When the fish get really picky, we are fishing the tail on an exposed 4/0 Mustad Wide Gap worm hook under the cork to take advantage of a slower fall.

Regardless of your venue, if you are fishing around rocks or grass, you have got to give the following a try. Rig one of Assassin's new Die Dappers on a 6/0 un-weighted worm hook with a wire screw lock keeper. Stanley makes a Swim Max hook that works perfectly.

I attach it to a Norton Quick Change Clip with a swivel to prevent any line twist and it adds just enough weight to slowly sink the buoyant tail. I was initially trying to simply find a better way to exploit submerged root balls with fewer hang-ups, but it has proven equally deadly twitched through the rocks on the revetment walls.

You can throw it out of sight, swim it on top or crawl it through structure without hanging up. My strike to catch ratio is also better when fishing it on braid with a 20-pound mono leader.

It is "game on" right now with the shrimp all over the lake and huge schools of juvenile shad crowding the shorelines. There are a lot of options, but if you will commit to a single game plan and minimize your boat riding, you can do more catching than fishing on Sabine this month!