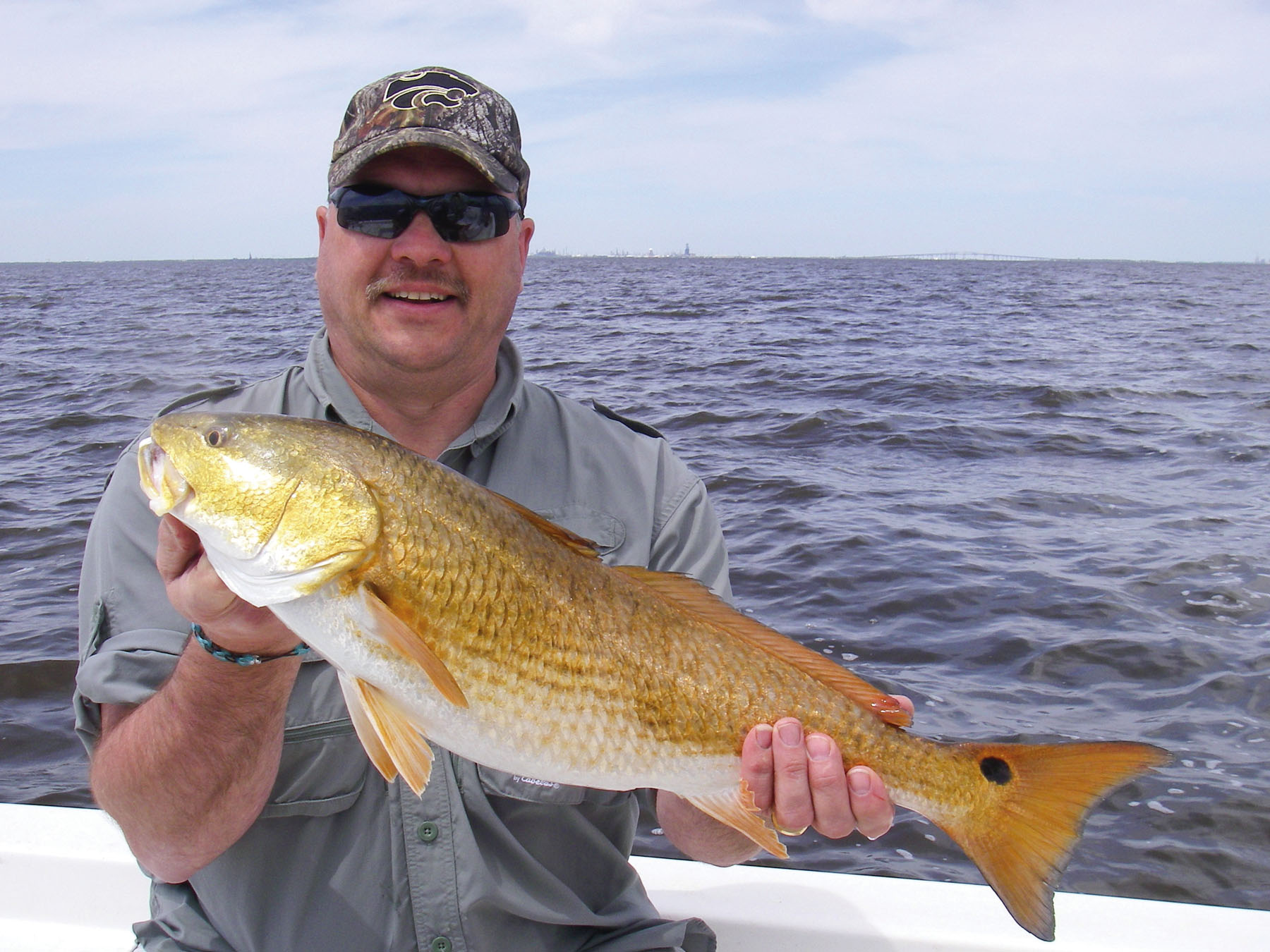 : A nice slot red, drifting on a windy day.
It has been another month of timing fronts and fishing in the fog, a howling wind or both, but the bite has been worth the inconvenience. Strictly due to wind, we still have stretches of shoreline as well as a couple of flats that have seen little or no fishing pressure, but that will hopefully change by the time you read this.

We have been in waders more than the boat lately, but the better trout have been feeding in less than four feet and it eliminates the hassle of boat control in whitecaps. That is not to say we haven't had some very good days on the drift-bite, and it will be even better this month.

With surface temperatures now in the mid-high 60s, the bite has been every bit as good in the mornings as the afternoons. Incoming tides are still preferred and they have been bodacious. The elevated levels push the water up in the Roseau cane on the east side of the lake and both the flounder and redfish enthusiasts could not be happier.

They have been able to take advantage of that bite with a single spin spinnerbait with a Gulp Swimming Mullet body, the 3-inch Usual Suspect Swimbait and four inch paddle tails like the Sea Shad and Flats Minnow. The key to eliminating wasted water when fishing this program is locating huge pods of juvenile shad holding tight to the grass.

Fishing a tide change at the mouth of a bayou or small drain is also all but a sure bet and big trout frequent these select spots as well. We have already had some excellent days wade fishing adjacent points with Corky Fat Boys, Maniac Mullets and topwaters. Dayglow, pink and Texas chicken have been most productive.

Caution when wading the bayous and drains from Whiskey Bayou to Green's: The bottom is very soft and irregular near the bank. Any hard spot is extremely slippery and you can go from two feet to four in a single step. Safest approach is to target a very small area and let the fish come to you!

I don't know how much longer Sidney Island will remain as it continues to erode, but the catching on the massive flats (what is left of the island) should light up this month. The trout are no longer spending the majority of their time suspended in the Intracoastal and the best bite now progresses from the flats to open lake over the course of the day, rather than back to deeper water.

While the aforementioned mullet imitations and topwaters are excellent choices, I have great confidence in an Assassin Die Dapper on a 1/8 ounce head. Big trout like it and you can crawl the shell or swim it near the top. Depending on clarity, it is hard to beat chicken on a chain or glow chartreuse.

Rocks on the north and south revetment walls and also north of Willow are yielding the best mix of trout and redfish and that bite will steadily improve as the days get warmer. A few select spots are generally more reliable, but I do better working long stretches with the troll motor, watching for bait or slicks.

Not only do we catch good numbers of solid trout here, but we also catch some of the largest trout of the year, as will anglers walking these rocks. You can expect some of those fishermen to park their truck and fish where you are catching, but "It is what it is!"

The majority of rock walkers are using shrimp, but we do very well with a Swimming Image, Catch 2000, She Dog and also VuDu shrimp under a cork. As a rule, the key to scoring big on these fish is to make repeated casts when you catch a fish before continuing down the wall. It is also not unusual to catch our largest trout 20 to 25 yards off the wall.

The rocks at Willow are not accessible by land. The same lures are effective, but we usually catch more redfish and flounder, seldom catching trout as large as at the revetment walls.

Good news for anglers that just want their string pulled and a fried fish dinner; the gulls are starting to work over small shrimp. Most of the trout are 15 to 18 inches but the action is non-stop!

Have you taken a youngster fishing lately?